The Impact of Metal Ion Exposure on the Cellular Behavior of Human Osteoblasts and PBMCs: In Vitro Analyses of Osteolytic Processes

Osteolysis in the periprosthetic tissue can be caused by metallic wear particles and ions that can originate from implant surface corrosion. These products influence cellular behavior and stimulate the expression of proinflammatory cytokines. The purpose of this study was to evaluate the impact of CoCr29Mo6 ions on cell survival, differentiation, and cytokine expression in human osteoblasts and peripheral blood mononuclear cells (PBMCs). Thus, we exposed cells with a mixture of 200 µg/L ion solution and determined cell viability and apoptosis/necrosis. Gene expression analyses of osteoblastic and osteoclastic differentiation markers as well as pro-osteolytic mediators (IL-6, IL-8, TNF-α, MCP-1, MMP1, TIMP1) were performed. These markers were also investigated in mixed cultures of adherent and non-adherent PBMCs as well as in co-cultures of human osteoblasts and PBMCs. The ion solution induced necrosis in osteoblasts and PBMCs in single cultures. All examined mediators were highly expressed in the co-culture of osteoblasts and PBMCs whereas in the single cell cultures only IL-6, IL-8, and MMP1 were found to be stimulated. While the applied concentration of the CoCr29Mo6 ion solutions had only marginal effects on human osteoblasts and PBMCs alone, the co-culture may provide a comprehensive model to study osteolytic processes in response to Co and Cr ions. View Full-Text
Keywords: osteolysis; corrosion; inflammation; osteoblasts; PBMCs; metal ions; CoCr; cytokines osteolysis; corrosion; inflammation; osteoblasts; PBMCs; metal ions; CoCr; cytokines
►▼ Show Figures 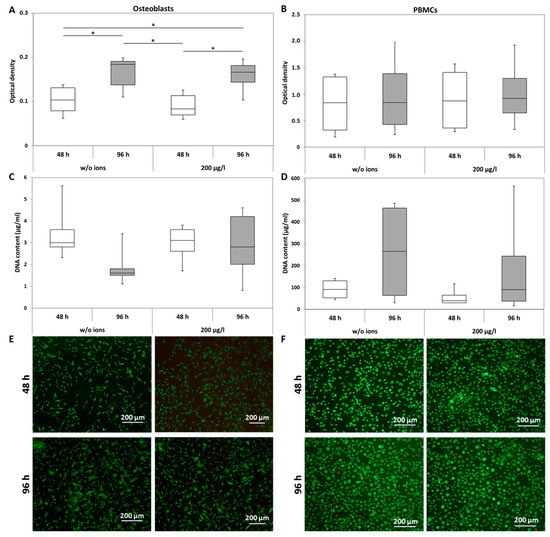