In this work, the reflectance, optical absorption, and band gap have been determined for CdTe thin films grown on planar and microstructured substrates. The treated surface was prepared by laser ablation of a silicon wafer, forming holes in a periodic arrangement. Thin films were grown by pulsed laser ablation on silicon samples kept at 200 °C inside a vacuum chamber. The presence of CdTe was verified with X-ray diffraction and Raman spectroscopy indicating a nanocrystalline zinc blended structure. The optical absorption of thin films was calculated by using the Fresnel laws and the experimental reflectance spectrum. Results show that reflectance of 245 nm films deposited on modified substrates is reduced by up to a factor of two than the obtained on unchanged silicon and the optical absorption is 16% higher at ~456 nm. Additionally, it was determined that the band gap energy for planar and microstructured films is about 1.44 eV for both cases. View Full-Text
Keywords: thin films; optical properties; laser materials processing; microstructure fabrication thin films; optical properties; laser materials processing; microstructure fabrication
►▼ Show Figures 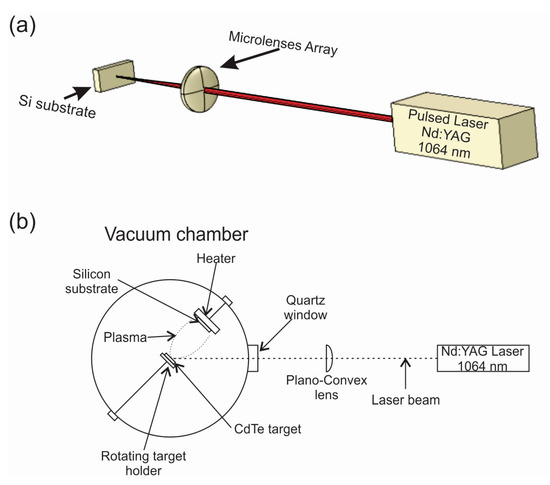