By using an easy and effective method of depositing conjugated polymers (PEDOT:PSS) on flexible substrates, a new design for organic bioelectronic devices has been developed. The purpose was to build up a system that mimics the motion of neurotransmitters in the synaptic cleft by obtaining an electrical to chemical signal transport. Fourier transform infrared (FTIR) spectroscopy and Raman measurements have demonstrated that electrochemical overoxidation region which separates the pristine PEDOT:PSS electrodes and allows ionic conduction has been achieved successfully. The influence of both electrical and ionic conductivities on organic electronic ion pump (OEIP) performances has been studied. The ultimate goal was to achieve the highest equilibrium current density at the lowest applied voltage via enhancing the electrical conductivity of PEDOT:PSS and ionic conductivity of electrochemically overoxidized region. The highest equilibrium current density, which corresponds to 4.81 × 1017 number of ions of acetylcholine was about 41 μA cm−2 observed for the OEIP with the electrical conductivities of 54 S cm−1. This was a threshold electrical conductivity beyond which the OEIP performances were not changed much. Once Nafion™ has been applied for enhancing the ionic conductivity, the equilibrium current density increased about ten times and reached up to 408 μA cm−2. Therefore, it has been demonstrated that the OEIP performance mainly scales with the ionic conductivity. A straightforward method of producing organic bioelectronics is proposed here may provide a clue for their effortless mass production in the near future. View Full-Text
Keywords: ion pump; acetylcholine; electrically conductive polymers; PEDOT:PSS; ionomers ion pump; acetylcholine; electrically conductive polymers; PEDOT:PSS; ionomers
►▼ Show Figures 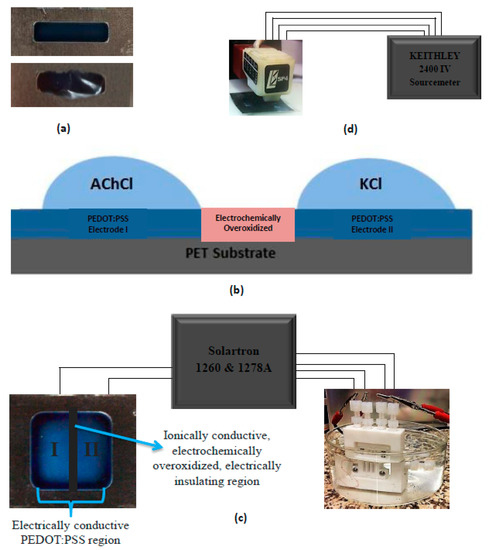