The influence of cooling rate on the wear and antimicrobial performance of a Cu52Z41Al7 (at. %) bulk metallic glass (BMG) composite was studied and the results compared to those of the annealed sample (850 °C for 48 h) and to pure copper. The aim of this basic research is to explore the potential use of the material in preventing the spread of infections. The cooling rate is controlled by changing the mould diameter (2 mm and 3 mm) upon suction casting and controlling the mould temperature (chiller on and off). For the highest cooling rate conditions CuZr is formed but CuZr2 starts to crystallise as the cooling rate decreases, resulting in an increase in the wear resistance and brittleness, as measured by scratch tests. A decrease in the cooling rate also increases the antimicrobial performance, as shown by different methodologies (European, American and Japanese standards). Annealing leads to the formation of new intermetallic phases (Cu10Zr7 and Cu2ZrAl) resulting in maximum scratch hardness and antimicrobial performance. However, the annealed sample corrodes during the antimicrobial tests (within 1 h of contact with broth). The antibacterial activity of copper was proved to be higher than that of any of the other materials tested but it exhibits very poor wear properties. Cu-rich BMG composites with optimised microstructure would be preferable for some applications where the durability requirements are higher than the antimicrobial needs. View Full-Text
Keywords: tribological properties; antimicrobial behaviour; metallic glass composite; scratch test; scratch hardness tribological properties; antimicrobial behaviour; metallic glass composite; scratch test; scratch hardness
►▼ Show Figures 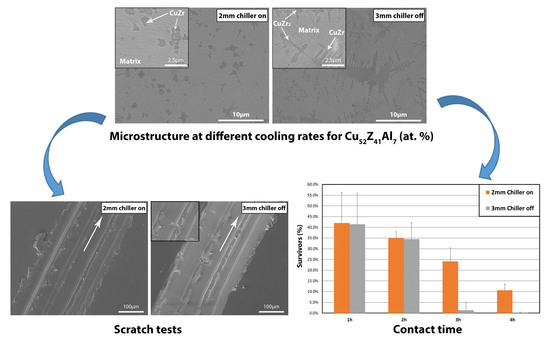