Oxygen scavengers are used in food packaging to protect oxygen-sensitive food products. A mixture of gallic acid (GA) and sodium carbonate was used as an oxygen scavenger (OSc) in bio-based multilayer packaging films produced in a three-step process: compounding, flat film extrusion, and lamination. We investigated the film surface color as well as oxygen absorption at different relative humidities (RHs) and temperatures, and compared the oxygen absorption of OSc powder, monolayer films, and multilayer films. The films were initially brownish-red in color but changed to greenish-black during oxygen absorption under humid conditions. We observed a maximum absorption capacity of 447 mg O2/g GA at 21 °C and 100% RH. The incorporation of GA into a polymer matrix reduced the rate of oxygen absorption compared to the GA powder because the polymer acted as a barrier to oxygen and water vapor diffusion. As expected, the temperature had a significant effect on the initial absorption rate of the multilayer films; the corresponding activation energy was 75.4 kJ/mol. Higher RH significantly increased the oxygen absorption rate. These results demonstrate for the first time the production and the properties of a bio-based multilayer packaging film with GA as the oxygen scavenger. Potential applications include the packaging of food products with high water activity (aw > 0.86). View Full-Text
Keywords: food packaging; absorber; active packaging; polyphenol food packaging; absorber; active packaging; polyphenol
►▼ Show Figures 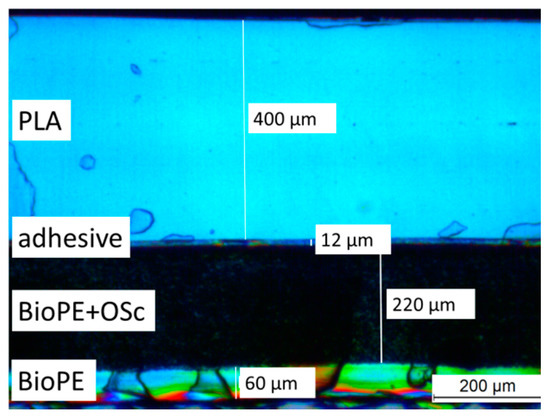