Alkali Silica Reaction (ASR) is known to be a serious problem for concrete worldwide, especially in high humidity and high temperature regions. ASR is a slow process that develops over years to decades and it is influenced by changes in environmental and loading conditions of the structure. The problem becomes even more complicated if one recognizes that other phenomena like creep and shrinkage are coupled with ASR. This results in synergistic mechanisms that can not be easily understood without a comprehensive computational model. In this paper, coupling between creep, shrinkage and ASR is modeled within the Lattice Discrete Particle Model (LDPM) framework. In order to achieve this, a multi-physics formulation is used to compute the evolution of temperature, humidity, cement hydration, and ASR in both space and time, which is then used within physics-based formulations of cracking, creep and shrinkage. The overall model is calibrated and validated on the basis of experimental data available in the literature. Results show that even during free expansions (zero macroscopic stress), a significant degree of coupling exists because ASR induced expansions are relaxed by meso-scale creep driven by self-equilibriated stresses at the meso-scale. This explains and highlights the importance of considering ASR and other time dependent aging and deterioration phenomena at an appropriate length scale in coupled modeling approaches. View Full-Text
Keywords: Alkali Silica Reaction; Lattice Discrete Particle Model; concrete; Creep; shrinkage; aging; deterioration Alkali Silica Reaction; Lattice Discrete Particle Model; concrete; Creep; shrinkage; aging; deterioration
►▼ Show Figures 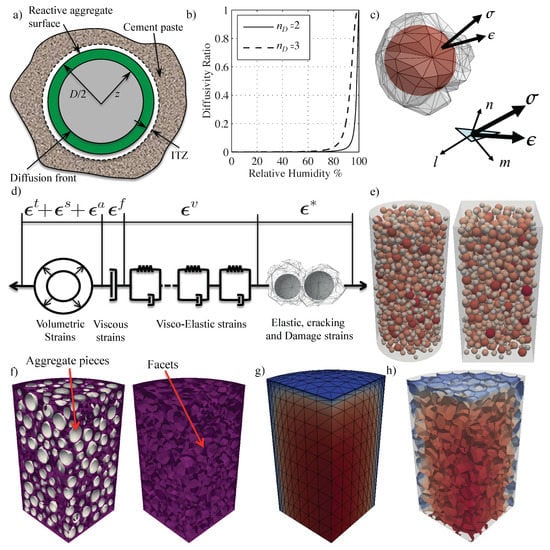