Special Issue: Materials for Electrochemical Capacitors and Batteries
Next Article in Special Issue

Assembly of One-Patch Colloids into Clusters via Emulsion Droplet Evaporation

Fluid drops coated with particles, so-called Pickering drops, play an important role in emulsion and capsule applications. In this context, knowledge of mechanical properties and stability of Pickering drops are essential. Here we prepare Pickering drops via electric field-driven self-assembly. We use direct current (DC) electric fields to induce mechanical stress on these drops, as a possible alternative to the use of, for example, fluid flow fields. Drop deformation is monitored as a function of the applied electric field strength. The deformation of pure silicone oil drops is enhanced when covered by insulating polyethylene (PE) particles, whereas drops covered by conductive clay particles can also change shape from oblate to prolate. We attribute these results to changes in the electric conductivity of the drop interface after adding particles, and have developed a fluid shell description to estimate the conductivity of Pickering particle layers that are assumed to be non-jammed and fluid-like. Retraction experiments in the absence of electric fields are also performed. Particle-covered drops retract slower than particle-free drops, caused by increased viscous dissipation due to the presence of the Pickering particle layer.
Keywords: Pickering drops; electric fields; drop deformation; drop retraction Pickering drops; electric fields; drop deformation; drop retraction

Particles bound to drop interfaces by capillary forces can form a protective layer, preventing drop coalescence. This constitutes the basic mechanism for Pickering emulsion stabilisation [1,2,3]. Pickering layers can be either homogenous or heterogeneous in terms of particle compositions, and can be produced using microfluidic methods [3,4,5] or electric fields [6,7,8,9,10]. The particles at the drop interface can be locked (e.g., by sintering [11]) to form a rigid capsule, a colloidosome, which can have a wide range of applications, including molecular transport and release [12,13].
Controlled deformation of shells provides information about their mechanical properties [14]. External stresses can be applied by various means to study the mechanical and rheological properties of Pickering drops. Buckling has been measured by drop volume compression and expansion [15,16,17], and drop deformation and elasticity have been investigated by mechanical compression [18,19,20], hydrodynamic shear flow [21,22], and microfluidic focusing devices [23].
Electric fields have been used to manipulate particles on drop interfaces by utilizing dielectrophoretic forces [6,7,10,24] and electrohydrodynamic (EHD) flows [8,9,25,26,27,28,29,30]. In addition, Pickering drops may coalesce [9,31,32], and in some cases produce non-spherical-shaped jammed shells [9,33,34].
In the present work, we use external uniform DC electric fields to induce electric stresses to drops covered by particles. The electric stress can result in oblate deformation (compression) or prolate deformation (stretching), depending on the electric properties of the fluids and the particles. For example, for a capsule made out of silicone oil covered by polyethylene (PE) particles and suspended in castor oil, the electric stress induces a compressive deformation along the applied field direction. The deformation can be controlled by varying the strength of the applied electric field. To prepare these drops that are fully covered by granular or colloidal particles, we use an electric field-driven self-assembly route, as described in detail in our previous work [8,9,35].

2.2. Surface Tension of Pickering Drops in the Absence of Electric Fields

3.2. Relaxation of Drop or Pickering Drop Deformation after Turning off the Electric Field

We have shown that the deformation of pure and particle-laden drops can be controlled by varying the strength of the applied electric field and the drop size, and that the deformation magnitude and sign depends on the electrical conductivity of the drop interface. The electrical conductivity of the drop interface changes when adding surface particles and can be tuned by both the particle coverage and electrical properties of particles. We have developed a fluid shell description for the steady-state deformation of Pickering drops covered by a particle layer that is assumed to be non-jammed and fluid-like. This is used to estimate the conductivity of insulating PE and conductive clay particle layers on Pickering drops. Retraction experiments in the absence of electric fields demonstrate that particle-covered drops retract more slowly than particle-free drops. This is mainly caused by increased viscous dissipation due to the presence of the Pickering particle layer.
We have shown how mechanical and electric properties of Pickering drops with different properties can be probed by electric fields. The method could be further developed into a tool for characterizing Pickering films and to study rheological properties of Pickering drops. The observed rheological response could be similar to the dynamics of Pickering drops in hydrodynamic shear flow, which can deform a drop and cause unjamming of the Pickering layer.

To quantify the coverage of particle at drop surfaces, images were computer processed. The particle coverages were calculated to be 75% ± 3% for a drop with PE particles forming a ribbon (inset image in Figure 5b), and 84% ± 2% for a PE covered drop (Figure 1b and the inset image in Figure 5b). We also attempted to estimate the clay particle coverage on the drop shown in Figure 1c. However, the clay particles are much more polydispersed in both size and shape, and can also form a multilayered film. It was therefore challenging to distinguish voids in particle film from the parts of the film that is very thin and transparent. The particle concentration was estimated to be 81% ± 7%, but the value can be even closer to 100%.

Pictures were recorded using a digital camera mounted on a stereoscope, and the observation view was always perpendicular to the electric field, which in the figures are in the horizontal direction. Particle sedimentation was used to bring particles to the drop interfaces where they adsorbed to the oil-oil interface due to capillary binding forces [2,52]. With particles confined on the drop surfaces, the application of an electric field across the sample cell induces EHD liquid flows [36,37] inside and outside the drop that are utilised to self-assembly granular (PE) and colloidal (Li-Fh) particles on the drop surface and eventually form Pickering drops. Extensive details of the method can be found in our previous work [8].

We used oscillating drop tensiometry to measure the interfacial rheology of Pickering drops. Silicone oil (Dow Corning 200/10 cSt, viscosity of 10 cSt, electric conductivity , relative permittivity ~2.8 and density ) with clay particles was used as the drop phase, while castor oil was used as the external phase. The clay particles were crushed and only the smallest particles <10 µm were selected by centrifugation. The density of the silicone oil and clay solution was measured to be 0.931 gcm−3 for silicone oil with 1% Li-Fh. The silicone oil–clay solution was extracted to a 500 µL gas-tight syringe and mounted to the equipment, while the castor oil was poured into a glass cuvette. The light silicone oil–clay drop was then made upward at the tip of a J-bent steel needle (outer diameter: 1.2 mm) and immersed in the castor oil. The tensiometer (Tracker S, Teclis instruments) uses a piezoelectric actuator to control the drop volume and an axisymmetric drop profile analysis technique. After the drop was made by injecting fluid, an external DC electric field (250 Vmm−1) was applied for 10 min to bring and structure the clay particles at the drop interface. With all the clay particles adsorbed at the interface, we used WDROP (version T2011) software to apply a sinusoidal variation of the drop volume while measuring the Pickering drop shape. Starting with a drop volume of 15 µL, the amplitude was set to 2 µL and the period to 5 s. All experiments were performed at 23 °C and were run for at least 5 min. The interfacial surface tension and elasticity were then measured using WDROP, which analysed the drop shape and fit the shape to the Young-Laplace equation. Depending on the apparatus, neglecting viscous forces is considered safe when the capillary number (the ratio between viscous and capillary forces) [53]. For the surface tension experiments conducted here, is around 0.06, which means that viscous forces are too strong to be neglected and that elasticity values obtained from this method are found to be inaccurate. Also note that at high oscillation rates (compared to the inverse of the capillary time scale), hydrodynamic effects can lower the accuracy of dynamic surface tension measurements [54,55]. 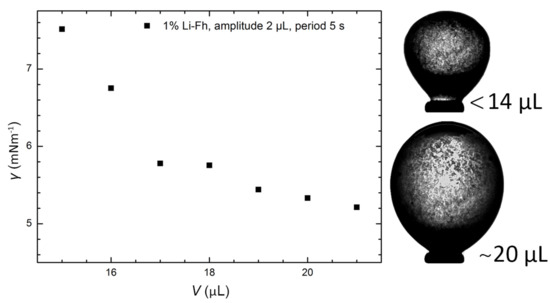 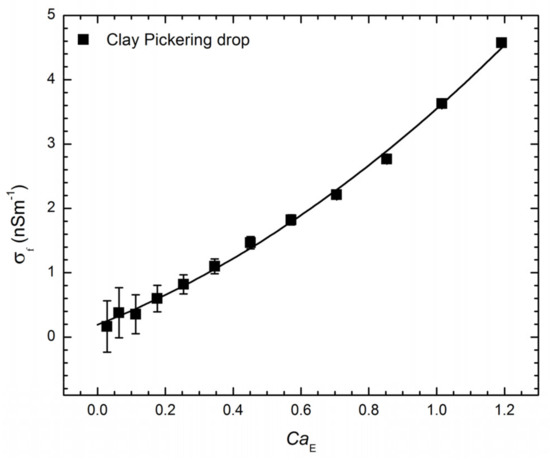