This study was compared and characterized two different alkali (potassium carbonate (PC) and potassium acetate (PA))-catalyzed acetylations of slicewood with vinyl acetate (VA) by a vapor phase reaction. The results revealed that the esterification reaction between VA and the hydroxyl groups of slicewood could be improved by using PC or PA as a catalyst. Additionally, a significant weight percent gain was obtained after VA acetylation with 5% of catalyst. Furthermore, the reactivity of the cellulose hydroxyl groups for VA acetylation was more pronounced at the C2 reactive site compared to acetylation with acetic anhydride. On the other hand, the apparent activation energy of thermal decomposition between 10% and 70% conversion is 174–183, 194–200, and 183–186 kJ/mol for unmodified slicewood and VA-acetylated slicewood with PC and PA, respectively. Accordingly, the thermal stability of the slicewood could be effectively enhanced by VA acetylation, especially for using the PC as a catalyst. View Full-Text
Keywords: acetylation; slicewood; vinyl acetate; thermal decomposition kinetic; apparent activation energy acetylation; slicewood; vinyl acetate; thermal decomposition kinetic; apparent activation energy
►▼ Show Figures 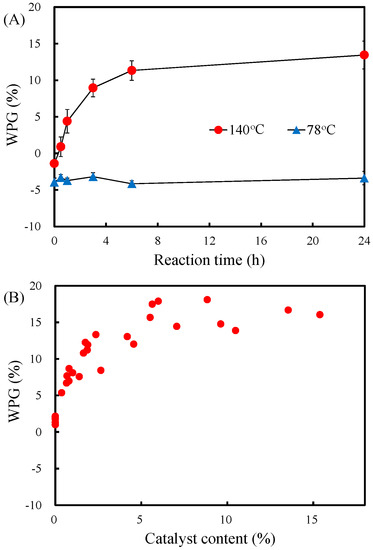