Deformation Modes and Anisotropy of Anti-Perovskite Ti3AN (A = Al, In and Tl) from First-Principle Calculations
Previous Article in Journal

Surfaces of carbon fibre roving were modified by means of a low temperature plasma treatment to improve their bonding with mineral fines; the latter serving as an inorganic fibre coating for the improved mechanical performance of carbon reinforcement in concrete matrices. Variation of the plasma conditions, such as gas composition and treatment time, was accomplished to establish polar groups on the carbon fibres prior to contact with the suspension of mineral particles in water. Subsequently, the rovings were implemented in a fine concrete matrix and their pull-out performance was assessed. Every plasma treatment resulted in increased pull-out forces in comparison to the reference samples without plasma treatment, indicating a better bonding between the mineral coating material and the carbon fibres. Significant differences were found, depending on gas composition and treatment time. Microscopic investigations showed that the samples with the highest pull-out force exhibited carbon fibre surfaces with the largest areas of hydration products grown on them. Additionally, the coating material ingresses into the multifilament roving in these specimens, leading to better force transfer between individual carbon filaments and between the entire roving and surrounding matrix, thus explaining the superior mechanical performance of the specimens containing appropriately plasma-treated carbon roving. View Full-Text
Keywords: carbon fibre; plasma treatment; concrete; interphase; mineral coating carbon fibre; plasma treatment; concrete; interphase; mineral coating
►▼ Show Figures 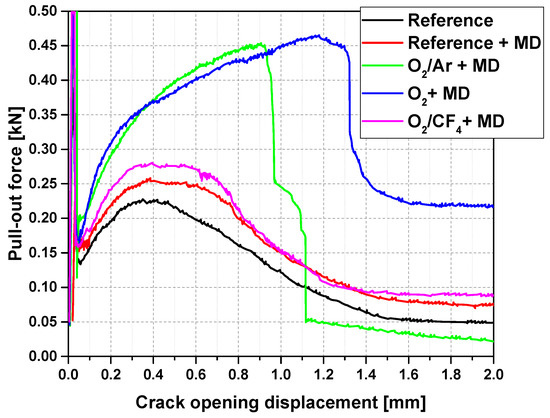