Among the natural macromolecules potentially used as the scaffold material in hydrogels, xylan has aroused great interest in many fields because of its biocompatibility, low toxicity, and biodegradability. In this work, new pH and thermoresponsive hydrogels were prepared by the cross-linking polymerization of maleic anhydride-modified xylan (MAHX) with N-isopropylacrylamide (NIPAm) and acrylic acid (AA) under UV irradiation to form MAHX-g-P(NIPAm-co-AA) hydrogels. The pore volume, the mechanical properties, and the release rate for drugs of hydrogels could be controlled by the degree of substitution of MAHX. These hydrogels were characterized by swelling ability, lower critical solution temperature (LCST), Fourier-transform infrared (FTIR), and SEM. Furthermore, the cumulative release rate was investigated for acetylsalicylic acid and theophylline, as well as the cytocompatibility MAHX-based hydrogels. Results showed that MAHX-based hydrogels exhibited excellent swelling–deswelling properties, uniform porous structure, and the temperature/pH dual sensitivity. In vitro, the cumulative release rate of acetylsalicylic acid for MAHX-based hydrogels was higher than that for theophylline, and in the gastrointestinal sustained drug release study, the acetylsalicylic acid release rate was extremely slow during the initial 3 h in the gastric fluid (24.26%), and then the cumulative release rate reached to 90.5% after sustained release for 5 h in simulated intestinal fluid. The cytotoxicity experiment demonstrated that MAHX-based hydrogels could promote cell proliferation and had satisfactory biocompatibility with NIH3T3 cells. These results indicated that MAHX-based hydrogels, as new drug carriers, had favorable behavior for intestinal-targeted drug delivery. View Full-Text
Keywords: Keywords: modified xylan; hydrogels; temperature/pH dual sensitivity; drug controlled release; biocompatibility Keywords: modified xylan; hydrogels; temperature/pH dual sensitivity; drug controlled release; biocompatibility
►▼ Show Figures 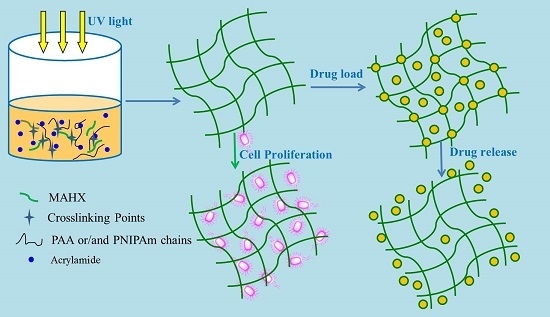