The aim of this study was to analyze the long-term color stability of eight self-adhesive composite resin cements (SACRCs) after storage in diverse media for up to one year. 480 discs (diameter: 12 mm/thickness: 1.0 ± 0.05 mm) were fabricated (n = 60/SACRC): (1) BeautyCem (BEA); (2) Bifix SE (BIF); (3) Clearfil SA Cement Automix (CLE); (4) RelyX Unicem 2 Automix (RXU); (5) SeT (SET); (6) SmartCem 2 (SMC); (7) SoloCem (SOC); and (8) SpeedCEM (SPC). After polishing, specimens were immersed in (a) red wine (RW); (b) curry-solution (CU); (c) cress-solution (CR); and (d) distilled water (DW) at 37 °C and measured after 7, 28, 90, 180, and 365 days for color differences (ΔE) and water absorption (WA). Non-aged specimens were used as baselines. After 365 days, all of the discs were polished and their ΔE was measured. Data were analyzed using Kolmogorov-Smirnov, partial-eta-squared/ηP2, 3-/1-way ANOVA with Tukey-HSD post-hoc test (α = 0.05). Significant differences occurred between all SACRCs for WA (p ≤ 0.003), except in RXU and in SET and in ΔE (p ≤ 0.002), except in SET and SPC. The significantly highest WA presented in SOC; the lowest showed in BEA. Significant ΔE differences and a decrease after polishing between all storage media were found (p < 0.001) with highest values for RW, followed by CU, CR, and DW. The lowest ΔE was measured for CLE, followed by SOC, BIF, RXU, BEA, SPC, SET, and SMC (p < 0.001) and increased significantly during aging. The highest ΔE decrease presented in BEA. SACRCs showed an increase in WA/ΔE within total aging time. Discoloration could not be removed completely by polishing. SACRCs need to be carefully selected for restorations in the esthetical zone with visible restoration margins. Polishing can significantly reduce the marginal discoloration.
Keywords: self-adhesive composite resin cements; curry solution; cress solution; red wine; distilled water self-adhesive composite resin cements; curry solution; cress solution; red wine; distilled water

Patients’ esthetic demands for the highest quality tooth-colored restorative solutions that have the best natural appearance are steadily increasing. At the same time, restorative dental materials and the adhesive cements such as self-adhesive composite resin cements (SACRCs) are subjected to major effects resulting from varying liquids and temperatures during food intake. It is already known that the continuous exposure of the restoration margins to the oral environment reduces the mechanical properties by hydrolytic degradation [1,2]. This leads to sorption that may result in swelling of the material, weakening of the polymer network, degradation of the filler matrix composite and, consequently, to secondary caries and hypersensitivity of the teeth at restoration margins [3,4,5,6]. Apart from the mechanical properties, the embedding of color particles from food may also lead to adverse visual effects with discoloration. Higher sorption appears with increasing storage time, while being unaffected by the storage medium [7,8]. When reviewing all fixing composite resins, the interactions with humidity appear to be higher with composite luting materials, such as SACRCs, than for conventional cements [9]. In spite of this, SACRCs are used very commonly in dental practice to insert restorations due to their positive aspects. The use of SACRCs constitutes a time-saving type of fixing that is less technique sensitive and very simple. SACRCs do not require pretreatment of the hard tooth tissues with adhesive systems [10,11]. Compared to conventional composite resins, SACRCs exhibit almost identical compositions in respect of the functional monomers, such as bisphenol-A-diglycidylmethacrylate (Bis-GMA), urethandimethacrylate (UDMA), and hydroxyethylmethacrylate (HEMA), as well as the filler content. However, they contain additional acidic groups (for example, phosphoric acid esters or carboxylate groups). These lead to an improved adhesion to the hard tooth tissues by demineralization of the tooth stump, in contrast to the purely micromechanical adhesion [10,12,13,14,15], which is important for a tight marginal seal. A permanent, stable marginal seal without micro-gaps and stability of the color is a key factor for the long-term success of a restoration and is one of the criteria for the currently much used SACRCs. The aforementioned sorption and the potentially resulting micro-gaps, due to liberation of filler particles, may lead to discoloration of the margins, which is, alongside secondary caries, one of the most common causes for a necessary renewal of a restoration [16,17,18,19,20,21,22,23,24,25]. Soluble color molecules with electrostatic charges consequently move into the lower layers and remain there causing discolorations [3,7,26,27]. These discolorations can be differentiated as extrinsic and intrinsic discolorations. Extrinsic discolorations are the surface agglomeration of plaque and food particles. They can be fully removed by cleaning and polishing as is performed in oral hygiene treatments [28,29]. Intrinsic discoloration, however, is a deeper-reaching discoloration, where dye components enter the deeper layers of polymer-based materials for example, which cannot be removed by polishing [30]. This leads to permanent discoloration of the materials, additionally increasing with higher surface roughness [31,32,33]. A rate of discoloration (ΔE value) below 3.3, by a spectrophotometer measurement, is generally specified as clinically not detectable [34]. The medium red wine seems to have the highest discoloration rates after short term storage [35,36,37,38].
To date, there is limited information available about the discoloration potential of different SARCs, especially in comparing diverse brands. The aim of this study was to compare the sorption and color stability of 8 SACRCs for one year of storage in the 4 media: red wine, curry solution, cress solution, and distilled water.
The tested null hypotheses were:

Four hundred and eighty standardized discs with a diameter of 12 mm and a thickness of 1.0 ± 0.05 mm were fabricated of eight different SACRCs available on the dental market, all are listed in Table 1.
Each SACRC was slowly filled in a standardized silicon mold (silicon: Heraform RS, type A and B, dark green and white, Heraeus Kulzer, Hanau, Germany) for disk manufacturing and consequently light cured (Elipar S10, 3M, Seefeld, Germany) in overlapping circles according to DIN EN ISO 4049:2010-03 with an exposure distance of 1.5 mm. All fabricated discs were mechanically polished according to a previous study [8]. Each disc specimen was equipped with a precise borehole in the middle of the edge to fix them on a fine wire, positioned upside down in a light-curing resin, to ensure a complete wetting with the different storage media in separate boxes. The color of each specimen was immediately determined, after the specimen´s fabrication and before immersion, with a spectrophotometer (Lambda 35 Perkin Elmer, Perkin Elmer Inc., Waltham, MA, USA) and acted as the baseline for the longitudinal measurements of the discoloration. Afterwards, the storage in a lightproof box of each group was performed at 37 °C in an incubator (HERA cell 150, Thermo scientific, Heraeus Kulzer, Hanau, Germany) and the specimens of each group were randomly divided into 4 sub-groups per 4 storage media (n = 15 per medium and SACRC):

Each medium was changed every 14 days. Discoloration rates and sorption (according to weight differences) were measured initially (0 days for baseline) and after 7, 28, 90, 180, and 365 days, as well as after 365 days after polishing, for 1 min (SuperPolish, Kerr Dental, Rastatt, Germany) on both sides. All fabrication and measuring steps were performed through one examiner and instruments were calibrated before analyzing.

All specimens were stored directly after fabrication in a drying chamber (Memmert U30 type with Roth Silica Gel Orange, Carl Roth GmbH + Co. KG, Karlsruhe, Germany) at constant 37 °C until a constant weight was detectable. The drying values by use of the specimens’ weight were measured with the help of a high-precision scale (NewClassic MF Model, MS 104S/M01, Mettler Toledo, Giessen, Germany). The drying duration to achieve this constant weight was approximately 2 weeks with a daily investigation. Sorption was generally performed based on weight differences, which was analyzed with the high-precision scale initially and after storage for 7, 28, 90, 180, and 365 days in the defined test medium. Therefore, specimens were gently wiped with a dry filter paper on both sides before weight and color measurements. Sorption was analyzed with the following formula:
S = m1 − m2
m1: specimen´s weight on specific aging level; m2: specimen´s first weight of dried condition (initial).

The discoloration measurements were analyzed initially after fabrication to perform a baseline and after 7, 28, 90, 180, and, 365 days, as well as after 365 days after polishing, using a spectrophotometer (Lambda 35 Perkin Elmer, Perkin Elmer Inc., Waltham, MA, USA). Quantitative measurements were performed with the definite transmission of light through each specimen (wavelength varying between 700 to 400 nm for visible light measurements) at different testing times. The parameters whiteness-blackness/brightness (L*), red-green axis (a*), and yellow-blue axis (b*) were processed in front of a standardized white background. The transmission (illuminant D65) was calculated and measured using the UV WinLabTM 2.8 Software program (Perkin Elmer Inc., Waltham, MA, USA) and the ΔE was analyzed using the Color Application Software V1.00 (Perkin Elmer Inc., Waltham, MA, USA) according to the following formula with respect to Euclidean distance: ΔE: difference in color change; Δa: difference in color change for the red-green axis; Δb: difference in color change in the yellow-blue-axis; ΔL: difference in whiteness-blackness/brightness).

For power analysis, 15 specimens of Clearfil SA Cement (Kuraray Medical Inc. Sakazu, Kurashiki, Okayama, Japan) were fabricated and color as well as water sorption were measured as a baseline. The specimens were stored in red wine for 7 days and the color water sorption was measured again. The computed difference of 5 with SD = 2 was assumed to be relevant; applying the two-group t-test with a Bonferroni corrected significance level equal to 0.008. The power analysis, using the software nQuery Advisior (Version 6.0, Statistical Solutions, Saugaus, MA, USA), was performed to determine the optimal sample size, which was 13 per group with a power of 99%. All data were analyzed with the statistical software SPSS Version 23 (SPSS INC, Chicago, IL, USA). Descriptive statistics for all groups were computed and the normality of data distribution was tested using the Kolmogorov-Smirnov test. Higher partial eta squared (ηP2) values indicated higher amounts of variability explained by the variable. Data were analyzed with the 3- and 1-way ANOVA with the Tukey-HSD post-hoc test. Results of statistical analyses, with p-values smaller than 0.05, were interpreted as statistically significant.

According to the Kolmogorov-Smirnov test, 87% of all data were normally distributed and therefore parametric tests were performed.

Descriptive statistics with mean and standard deviation (SD) of ΔE of all tested SACRCs for each storage medium and aging level were listed in Table 4.
The storage medium exerted the highest influence on ΔE values (p < 0.001; ηP2 = 0.957), followed by the aging level (p < 0.001; ηP2 = 0.871), and the SACRCs material (p < 0.001; ηP2 = 0.522). Significant differences in ΔE values between all storage media were found (p < 0.001). Highest ΔE values were observed for SACRCs stored in red wine, followed by curry solution, cress solution, and distilled water. The significantly lowest ΔE was generally measured for CLE, followed by SOC, BIF, RXU, BEA, SPC, SET, and SMC (all p < 0.001). Significant differences occurred between all tested SACRCs (p ≤ 0.002), with the exception between SET and SPC (p > 0.999). ΔE increased significantly during aging level (Figure 1).
Therefore, significant differences were found between all aging levels with the lowest ΔE values for 7 storage days, followed by aging 28, 90, 180, and 365 days.

Within the limitations of this in vitro study, the following conclusions can be drawn: 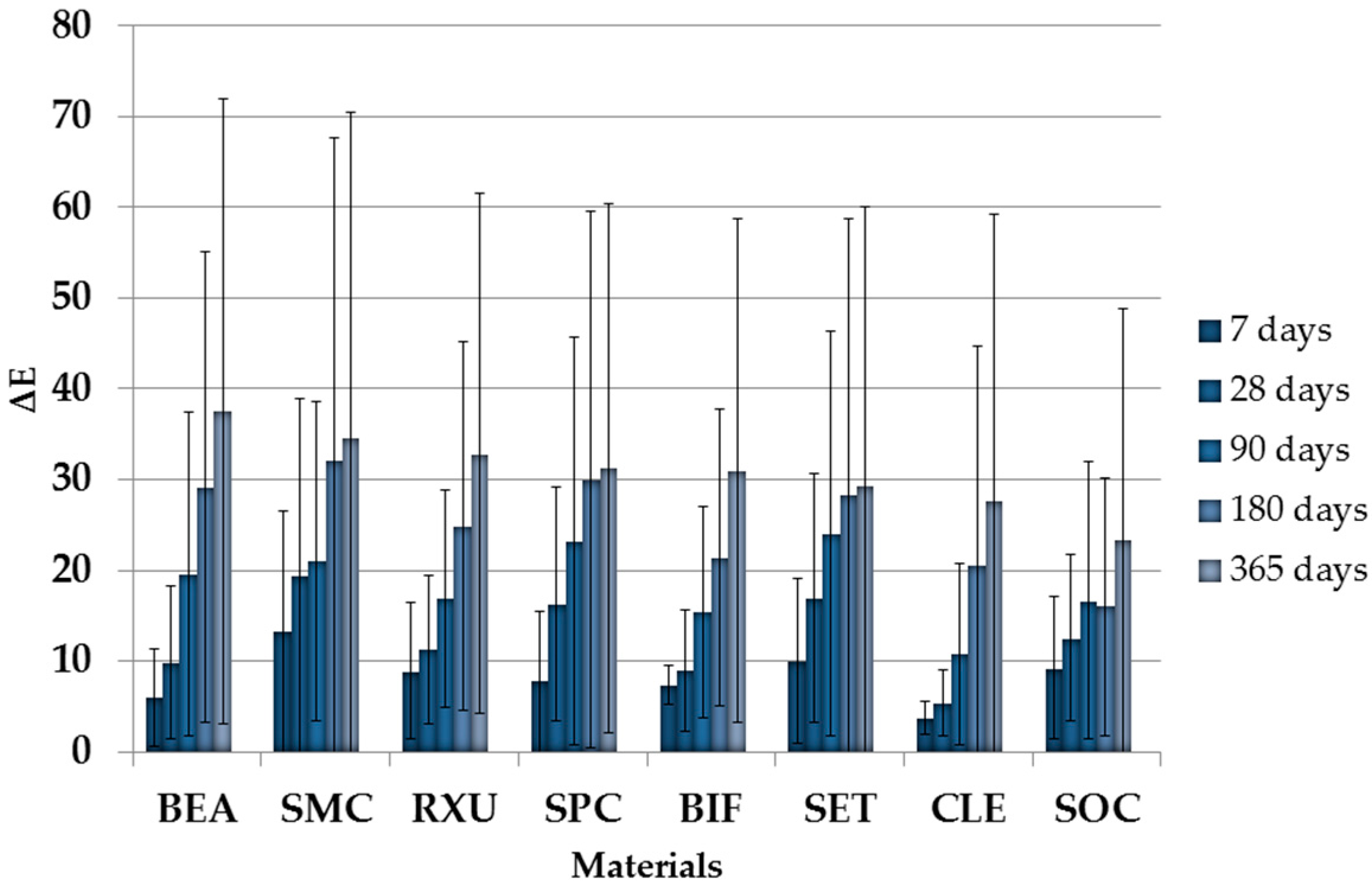 Table 3. Weight (in µg) and water absorption (in µg/mm3) after 1 year (365 days) of storage with pooled aging level for each storage medium and SACRCs in alphabetical order.