Cavitation erosion phenomena are related to the rapid formation, growth, and collapse of bubbles due to the presence of strong pressure fluctuations in a liquid [1]. In a very short time, the bubbles collapsing produces shock waves on the surface of the material exposed to these micro-jets, which have a speed higher than 100 m/s [2]. When the pressure load exceeds the elastic limit of the material, this causes local plastic deformations able to induce pitting by dislodging particles from the surface itself [3,4]. The initial phase of the damaging phenomenon, called incubation time [5], does not involve any mass loss. However, the rapid repetition of the impact induces an accumulation of deformation until micro-failure occurs, with subsequent material loss [6]. In particular, it has been observed that the repetition of such pressure pulses on a solid surface can result in a fatigue-like failure [7,8].
Many authors investigated the behavior of different metals and alloys exposed to cavitation erosion during their working service. In particular, being frequently used for propeller applications, copper alloys have been widely analyzed [8,9,10,11,12]. Iron and steel, particularly stainless steel and cast iron, have been extensively studied for cavitation erosion resistance, especially with regard to the combined effect of a corrosive environment [13,14,15,16,17,18]. Similar investigations have been performed on Ti, Ni, and Co alloys [19,20,21,22,23,24].
Aluminum alloys are also frequently used for production of parts that undergo severe cavitation erosion phenomena during service—like diesel cylinder liners, hydrofoils, valves, sluice gates, etc. [25]. Typically, they are Al–Cu, Al–Mg, Al–Si–Mg or Al–Zn–Mg wrought alloys. These alloys have been widely studied [7,26,27], and also the synergic effect of aggressive fluids or slurries has been evaluated [28,29]. Concerning the aluminum foundry alloys, they are typically used for casting components like water and fuel pumps, cylinder blocks, pistons, heads and bases of combustion engines, propellers, valves, etc. [1,30]. Despite undergoing cavitation erosion damage, data about their behavior under these working conditions are less available in literature. Tomlinson et al. analyzed the effect of heat treatment on AlSi7 and AlSi11, finding a strong increase in erosion resistance due to age-hardening [31]. Other authors stated the poor behavior of AlSi as-cast alloys during cavitation erosion tests [32,33]. Some authors compared the cavitation erosion resistance of A356 alloy and A356FA5 composite containing 5 wt % fly ash, whose fine particles seem to suppress pit growth [34]. Additionally, similar investigations were also performed on composites reinforced with particles or fibers of silicon carbide and alumina [35,36].
More recently, some attempts have been made to correlate microstructural variations to cavitation erosion resistance for aluminum alloys [37]. As known, the application of ultrasonic treatment to liquid metals strongly affects the alloy microstructure, with changes from dendritic to almost globular, subsequently improving mechanical and corrosion resistance [38]. The idea of applying a dynamic action to a liquid metal to modify the final microstructure was mainly developed by D. Eskin [39]. As reported in literature, in fact, the introduction of high-power ultrasonic vibration into a liquid alloy leads to cavitation and acoustic streaming. Ultrasonic waves produce cavitation phenomena in liquids and the creation, growth, and collapse of bubbles, which can also generate very high impact forces. These have a dynamic role during nucleation because the high pressures fragment the rising crystals by breaking dendritic structures and by increasing the nucleation centers, while the acoustic flow induces a vigorous stirring of the bath, homogenizing the alloy [38]. Cavitation phenomena originate also a rapid development of hydrogen bubbles, causing their coalescence and flotation on the liquid metal surface and, therefore, promoting alloy degassing. Moreover, by means of ultrasound treatment, the wettability of non-soluble non-metallic particles—which are unavoidably present in the liquid metal—increases and heterogeneous nucleation is favored without the need of expensive inoculants [39]. Many authors have already demonstrated the effectiveness of this treatment on hydrogen removal [39,40], grain refinement [38,41], improved homogeneity of the casting [42], and preparation of feedstock material for semisolid processing [43], as an alternative to other conventional stirring methods [44].
To the authors’ knowledge, no data about the influence of microstructural variation promoted by ultrasound on cavitation erosion response of AlSi foundry alloys is available in literature. Hence, the aim of this paper is to investigate the effect of the ultrasound treatment of AlSi7, the most commonly used aluminum casting alloy, on the cavitation erosion resistance, comparing its behavior to the conventional cast alloy in both as-cast and age hardened conditions.

The experiments were carried out on a hypoeutectic Al–Si alloy produced from commercially pure elements. No nucleant agents or modifiers were added. In Table 1, the chemical composition of the alloy, measured by GNR Metal Lab Plus spectrometer (GNR, Agrate Conturbia Novara—Italy), is reported.
About 1 kg of alloy was melted into an alumina crucible at 50 °C above the liquidus temperature, which is equal to 613 °C. A first set of samples was obtained by pouring the molten metal into cylindrical steel molds (26 mm in diameter and 50 mm in height) preheated at 150 °C.
These samples were named ‘NUST’, i.e., Not UltraSound Treated.
A second set of samples, called ‘UST’ (UltraSound Treated), was produced by treating the alloy with ultrasounds (US) before being poured into the mold. In detail, the treatment was performed on the molten Al–Si alloy inside the crucible by means of a GV 2000 ultrasonic apparatus (Felisari, Verano Brianza—Milan, Italy), equipped with an Inconel 625 probe with final amplification diameter of 18 mm. Frequency, amplitude, and duration of the vibration were set at 20,000 ± 400 Hz, 80 µm, and 60 s respectively. In Figure 1, a sketch of the US treatment setup is shown, together with the real equipment.
Preliminary tests were performed in order to evaluate the possible dissolution of the probe into the molten aluminum alloy, with subsequent contaminations. To this aim, the US treatment was performed on more than 20 crucibles containing molten AlSi alloy and each corresponding chemical composition was measured by GNR Metal Lab Plus spectrometer. In all cases, the total amount of possible contaminants (i.e., Ni, Cr, Fe, Mo, and Nb) was lower than 300 ppm, therefore lower than the limits of the alloy according to the standard. Details of this study are reported elsewhere [45]. After demonstrating that no significant contamination of the molten metal is induced by UST, the investigation was focused on the analysis of the performance of the alloy.
A group of samples, in both NUST and UST conditions, were heat treated (T6) according to the following procedure: solution treatment for 4 h at 530 °C, quenching and artificial aging at 150 °C for 4 h. Therefore, four different alloy conditions were obtained.
From the cast cylinders, 10 mm thick disks were machined. One base surface of the disks was ground and polished up to a mirror finish with standard metallographic techniques to allow microstructure analysis and cavitation-erosion tests. Regarding the surface preparation for hardness tests, grinding operations were performed with up to 320 grid paper.
The microstructure was assessed by a Leica DMI3000 optical microscope (Leica Microsystems, Wetzlar, Germany) equipped with a Leica digital camera (Leica Microsystems, Wetzlar, Germany). Grain size measurements were carried out in polarized light. Before the observations, samples were subjected to an electrochemical etching in HBF4 3 wt % solution with an applied bias of 20 V. Grains were identified with chromatic variation and their dimension was assessed by the intercept method defined in the NF A04–503 standard [46].
Brinell hardness tests were performed by a Galileo Ergotest Comp25 apparatus (LTF Galileo Italy), with an applied load of 62.5 kg and an indenter with a radius of 2.5 mm. Reported values are the average of at least five indentations per sample.
Cavitation-erosion investigations were carried out according to ASTM G 32 standard, applying the “stationary specimen method” [47] and using the same Felisari GV 2000 equipment at the same frequency (20 kHz) but changing the amplitude to 50 µm. As reported in the standard, this test method produces cavitation damage on the face of a specimen under high frequency vibration, while immersed in a liquid. The vibration induces the formation and collapse of bubbles in the liquid, which in turn produces the erosion of the specimen, detectable as material loss. The standard stated that, although the mechanism for generating fluid cavitation in this method differs from that occurring in real systems, the damaging mechanism is believed to be basically similar. Hence, the method represents a small-scale test that enables both comparison of the cavitation erosion resistance of different materials and study of the nature and evolution of the damage [47].
Thus, in agreement with the standard, the specimen was immersed in distilled water and the vibrating tip of the horn was placed in close proximity to it. In this way, the cavitation bubbles induced by the horn acted on the specimen. In the used configuration, the horn tip had a diameter of 18 mm, thus the exposed area resulted about 254 mm2. The specimens were fixed in a holding system at 0.5 mm from the horn tip. As shown in Figure 2, both the holding system and horn were placed in a tank filled with distilled water at constant temperature (room temperature).
Based on the standard rules, the test specimen has to be weighed accurately before testing begins and again during periodic interruptions of the test, in order to obtain a history of mass loss versus time. Appropriate interpretation of this cumulative erosion versus-time curve permits comparison of results between different materials. Hence, at first, short tests were performed (0.5, 1, 2, 4, 8, 12, 24, 36, 48, and 60 min) in order to analyze the cavitation mechanism and to point out the differences induced by the modification of the microstructure from NUST to UST in the early stage of the damaging. Then the experiments were prolonged up to 8 h, according to the standard. In particular, sample damaging was monitored every hour during the tests, measuring the mass loss of the specimens with a precision balance having a sensitivity of 0.1 mg.
The eroded surfaces, after each test interruption, were analyzed by means of Scanning Electron Microscope (SEM), LEO EVO 40 (Carl Zeiss AG, Milan, Italy).

The effect of ultrasound treatment on the cavitation erosion resistance of an AlSi7 alloy has been investigated.
The analysis of the eroded areas showed the same damaging mechanism for all the alloy conditions. However, it was found that the ultrasound treatment of liquid metal enhances material resistance to cavitation phenomena, as visible from the measurements of weight loss as a function of time after several hours of exposure to cavitation. It was established that this is mainly due to the modified globular microstructure of UST samples, which is characterized by smaller grain size, a less interconnected primary phase than the dendritic one, a finer eutectic phase and a more uniform distribution of solute and secondary phases. This created a barrier against the propagation of the erosion mechanism, which started from the soft aluminum matrix, as observed by SEM analysis of the specimen surface after different exposure times. As a consequence, UST samples exhibited a reduced weight loss in comparison with NUST ones. Heat treatment lead to an increase in material hardness and cavitation resistance for both NUST and UST conditions, but did not affect the erosion mechanism and confirmed the better performance of UST samples than NUST ones, as additionally supported by the observation of the cross section of the eroded samples.
These findings can be helpful in defining an effective treatment in order to improve the cavitation resistance of foundry alloys.

The authors gratefully acknowledge D. Paderno for the realization of the holding system for cavitation tests. 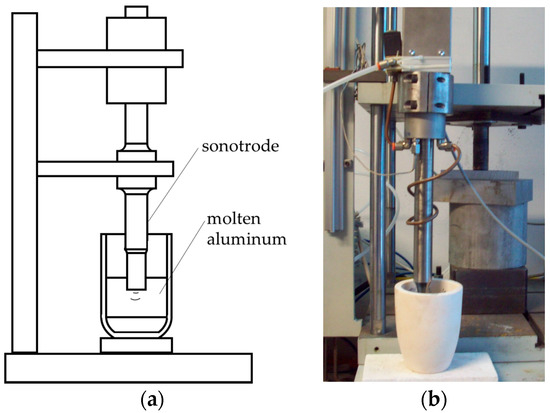 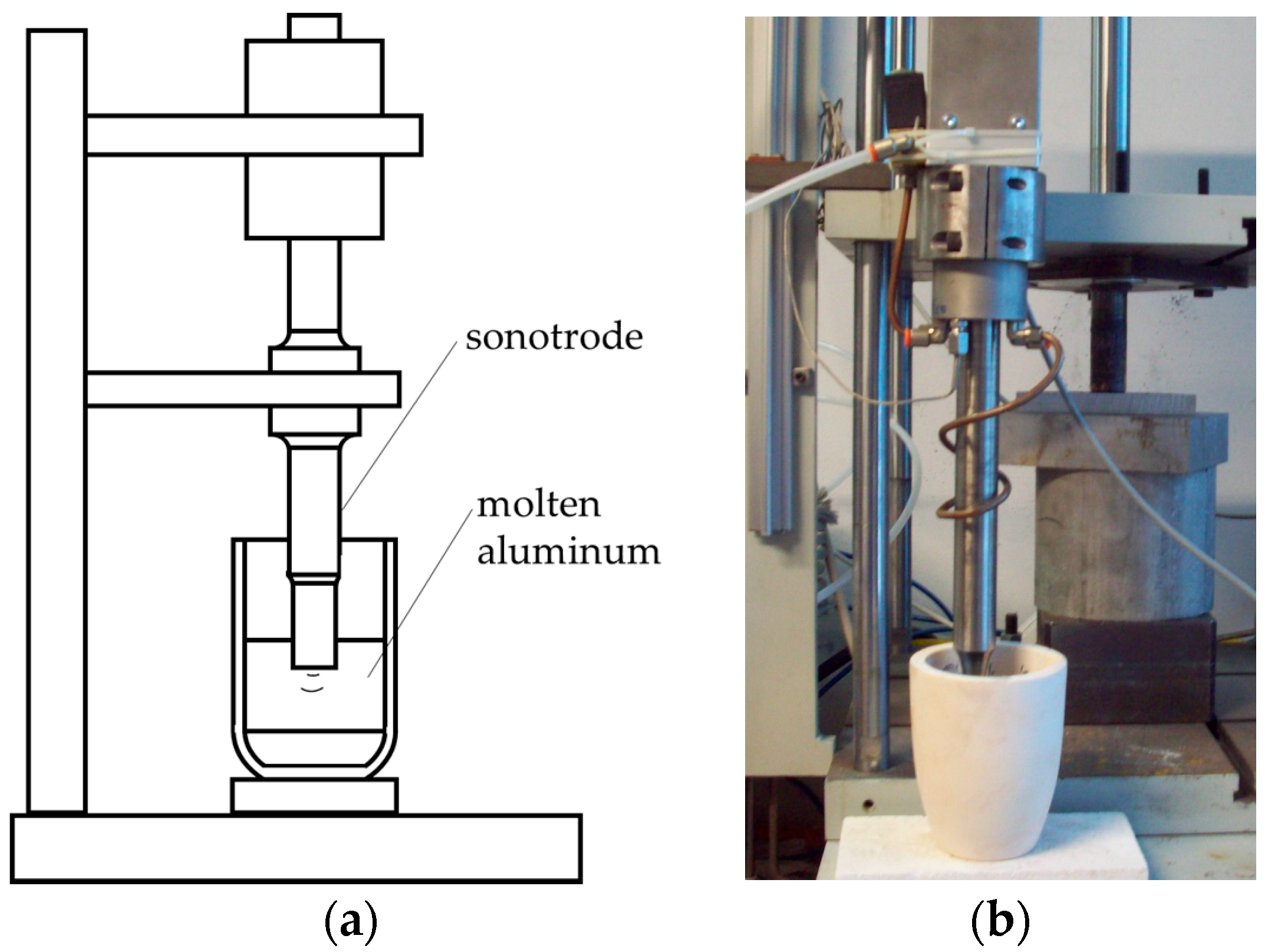 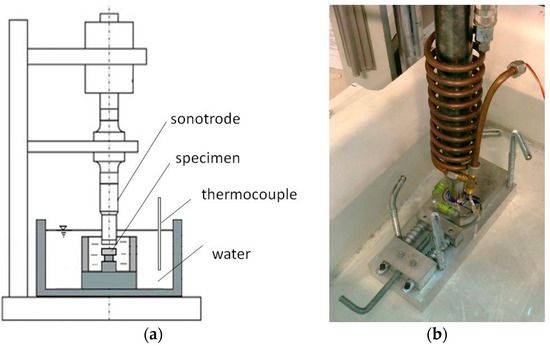 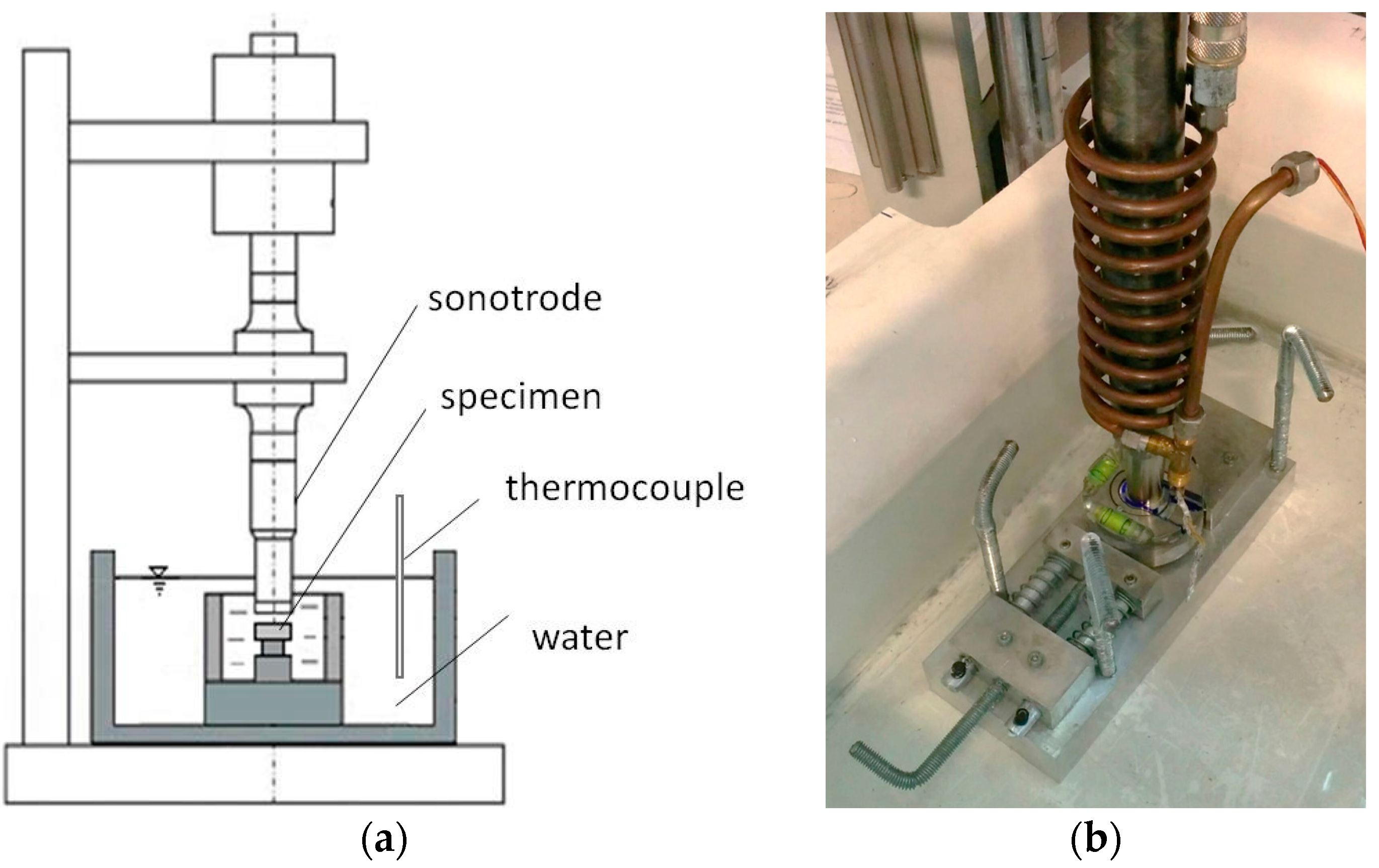 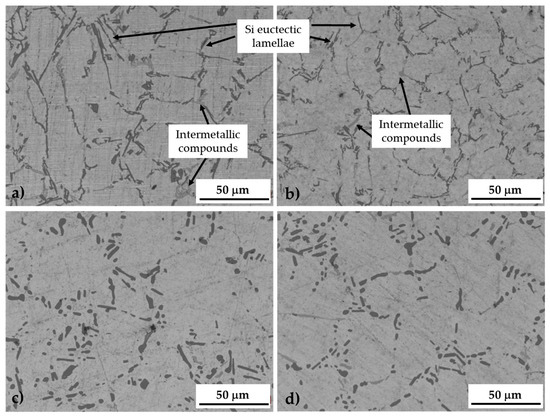 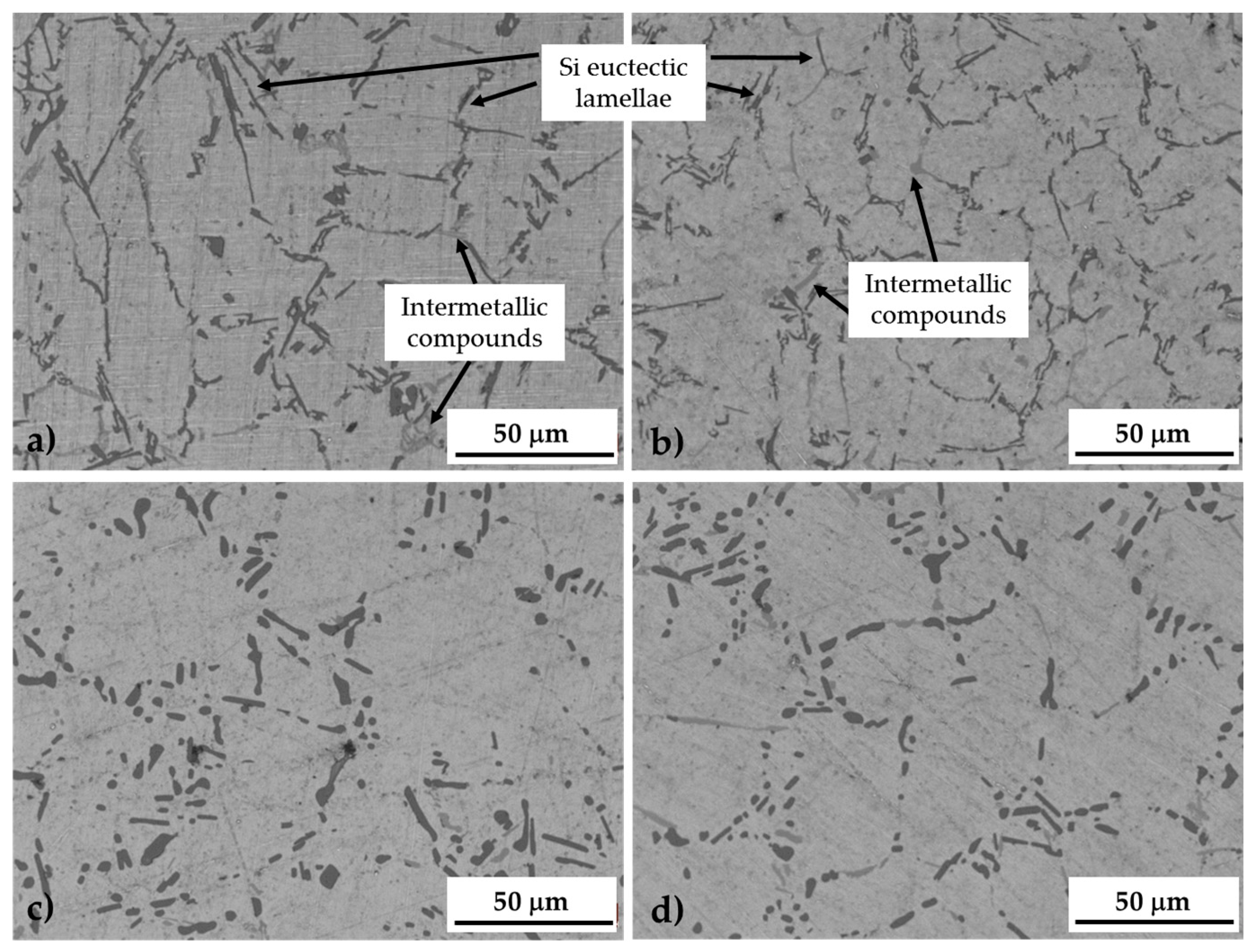 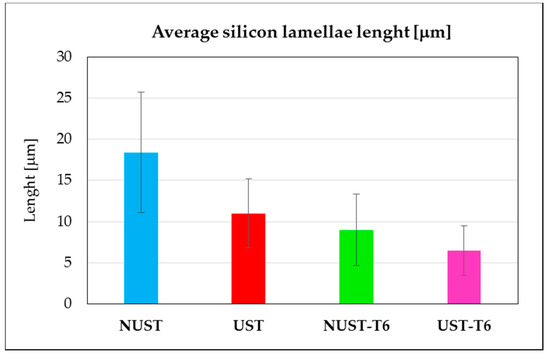 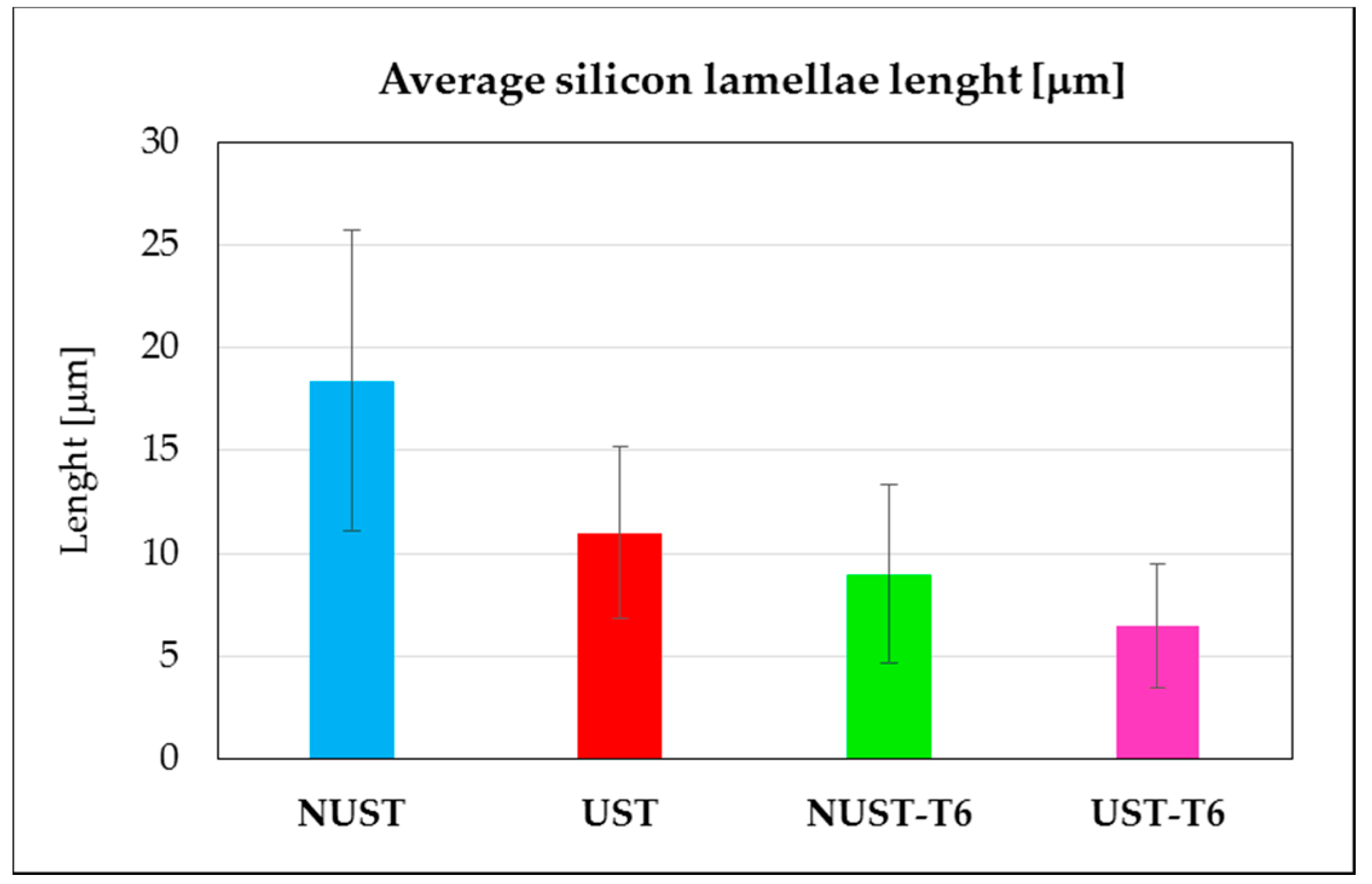 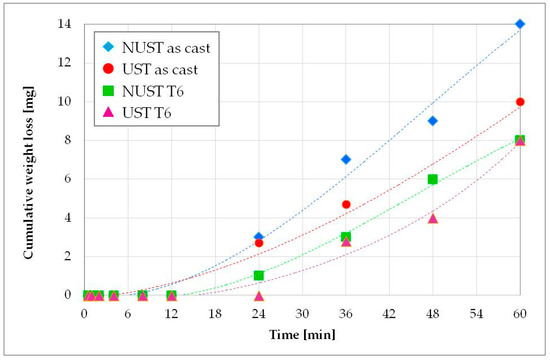 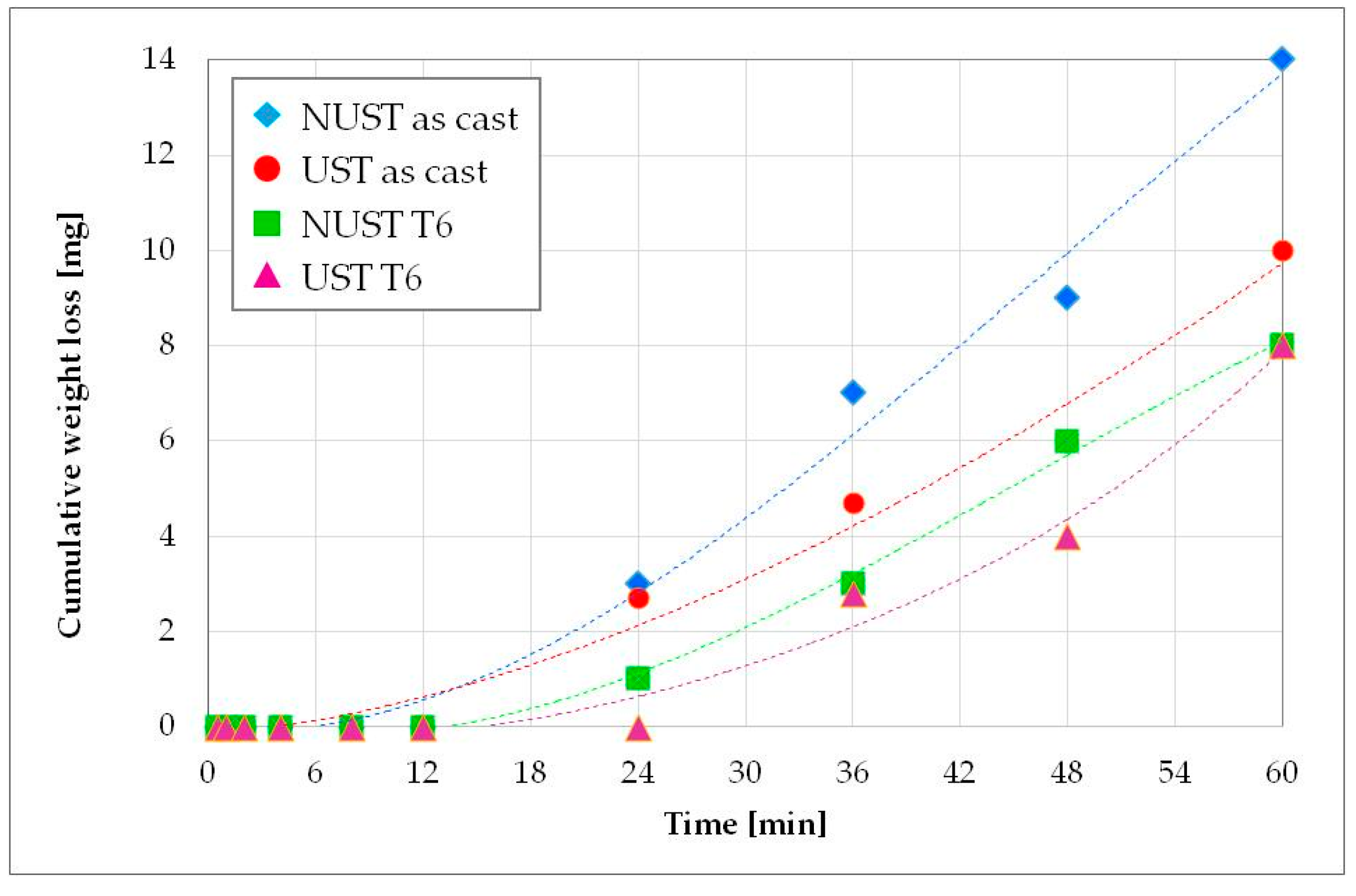 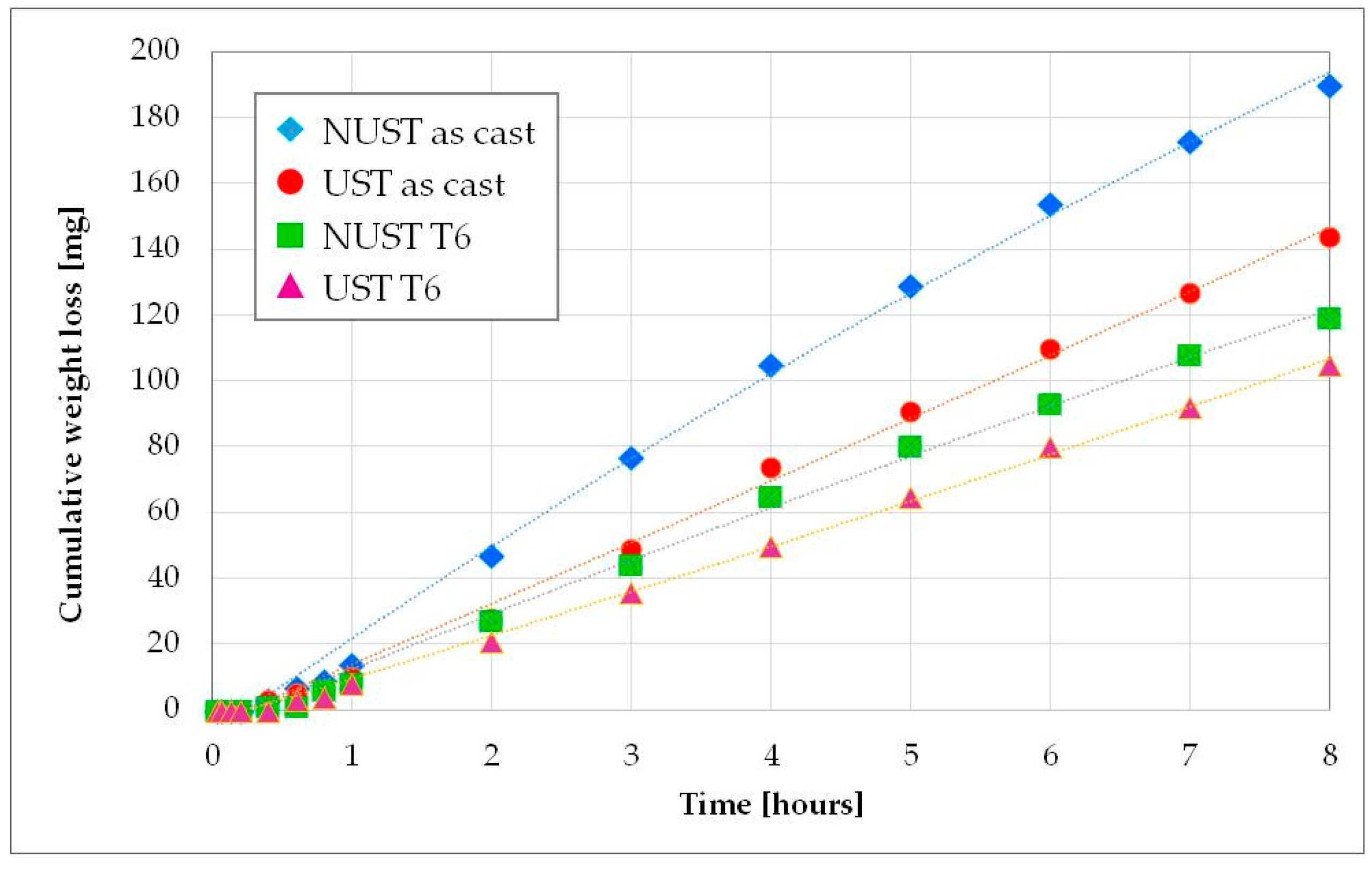 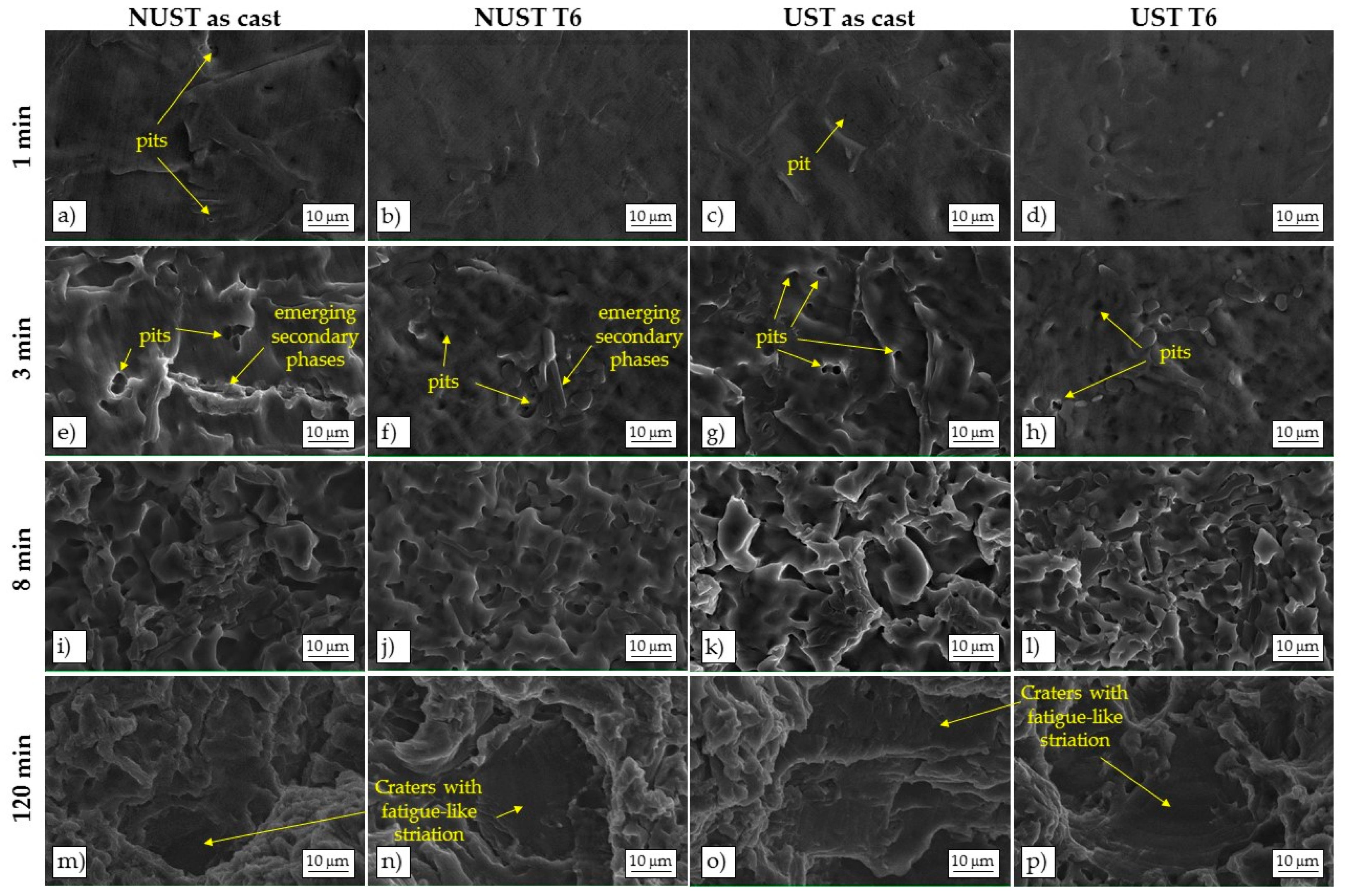