Photonic crystals (PCs) are a class of optical media represented by natural or artificial structures with periodic modulation of the refractive index. The period of refractive index repetition must be comparable to the wavelength of the light for intended application.
This characteristic of PCs guides to a range of frequency being allowed in transmission, while blocking others. This forbidden range of frequency forms the stop band. The material is a complete photonic band gap (CPBG) material, if the stop band is present in all directions, or else, it is a pseudo band gap material. The band gap properties are decided by parameters such as the refractive index contrast between the individual dielectric constituents, lattice parameters, and the crystal structure. The stop band positions depend largely on three factors: the refractive index contrast between the periodic components and the surrounding phase, the lattice constant and the filling [1]. Any one of these parameters in the photonic structures that is stimuli-responsive can be used for the creation of responsive PCs: PCs optical properties are related to the changeable photonic band gap characteristics through the application of chemical stimuli, temperature, mechanical forces, electrical/magnetic fields, or light. Much effort is devoted to study the PBG [2,3,4], for example, many works of Joannopoulos group are dedicated on problems related to a new kind of PCs, having structures with full three-dimensional band gaps [5,6]. Depending on geometry of the structure, PCs can be divided into three broad categories, namely one-dimensional (1D), two-dimensional (2D) and three-dimensional (3D) structures. Schematic examples are shown in Figure 1.
Historically, the preparation of PCs has been moved forward by following different phases. Firstly, bare opals, prepared starting from several polymeric and co-polymeric materials, are studied [7,8]; afterwards, opals infiltrated with different guest materials were also realized to modulate the optical properties of the composite PCs, both 2D and 3D [9,10,11,12,13,14,15]. These crystals can be characterized as weak PCs with directional band gaps, but they are always the test platform for the investigation of fundamental physical effects applicable to other types of PCs.
Then, new properties have been achieved by introducing the inverse opals with strong light-to-structure interaction including a chance of approaching the omni directionality of the band gap and the possibility to fill the holes with different materials [16,17,18].
Furthermore, different kinds of materials can be introduced into the opals and inverse opals, allowing modulation of composite optical properties. In particular, materials with complex dielectric constant, such as silver and gold, are interesting option as they support both localized and propagating surface plasmon modes. Metallo-dielectric PCs have been shown to possess CPBG in the visible wavelength range [19]. For example, monolayer of self-assembled spherical colloids coated by a thin silver or gold film can be used as support for localized surface plasmon resonance (LSPR) whose peak position can be tuned by varying the sphere diameter, the metal film thickness, or both [15,20,21,22]. Apart from metallic thin films, metal nanoparticles are also used to increase the light–matter interaction in the PCs. In particular, gold nanoparticles are used for enhanced light harvesting due to the intrinsic plasmonic resonances [23,24,25]. A frequent example of composites based on colloidal PCs and noble metal NPs is the immobilization synthesized AuNPs into PCs. Among others, easy dipping method to immobilize AuNPs on the surface of a prefabricated three-dimensional (3D) ordered SiO2 opal film is reported and allowed to observe both LSPR of the NPs and the stop band of the PC structures [26]. Comparing with opal structures, inverse opals with both resonance peaks and diffraction peaks are especially desirable because they combine the advantages of high surface area with the accessible diffusion pathways associated with periodic macroporous structures [27,28]. Nevertheless, such a kind of structure has rarely been reported due to the difficult to control the uniform distribution of noble metal NPs and the low robustness of metal-dielectric inverse opals [29].
Much effort has been made to overcome these problems, for example, AuNPs infiltrated polystyrene (PS) inverse opal are fabricated via a multistep approach, and both LSPR properties of AuNPs and photonic features of the PCs were demonstrated [30,31,32,33,34,35].
Regarding the preparation of AuNPs, different methods have been investigated to allow controlling size and monodispersity, using hydrophilic or bifunctional thiols, or avoiding the use of capping agent by means of sputtering deposition (e.g., [36,37,38,39,40]).
The composite PCs described in this review can also be considered as a new class of PCs, in which the light transport depends on synergy of different resonance phenomena. The strong alteration of optical properties of composite colloidal PCs was achieved by purposive engineering of their structure topology and composition [41].
Moreover, due to the increasing demand for miniaturized sensing platforms with fast response, composite PCs have become appealing optical materials for the control and manipulation of light [42,43]. In particular, photonic band gaps in the visible range can generate the visible diffraction colors and PCs with incomplete band gaps: these materials can be used as reflective coatings for optics, waveguides for directing the propagation of light, and many other optical components. Furthermore, PCs are widely applicable in different areas such as biological and chemical sensing, tunable color displays, and many optically active components [44,45,46,47,48,49,50,51,52,53,54,55,56,57].
The objectives of this review, schematically reported in Table 1, are: (i) summarize the materials and methods for the fabrication of photonic structured materials; (ii) discuss strategies for creating photonic materials with AuNPs; and (iii) give an overview of the various applications filed in which these innovate materials are evolved.

Composite colloidal PCs represent an innovative platform that may lead to the realization of different optical functions. Better opportunities for the application of these crystals are based on tuning of particular resonances and on the largely extended control on their functionalities. In fact, exploiting the synergy between the PGB of PCs and SPR of AuNPs, it is possible to obtain innovative performance, which make the composite structures promising for catalysis, optoelectronics, sensing and photovoltaic applications. The practical realization of hybrid arrays with specific optical resonances, however, remains challenging since it requires a high level of control for simultaneously positioning both metallic and dielectric NPs. For this reason, this review is focused on the recent studies on functionalized AuNPs in composite colloidal PCs, considered extraordinary systems for their photonic-plasmonic properties, useful in several relevant application fields. 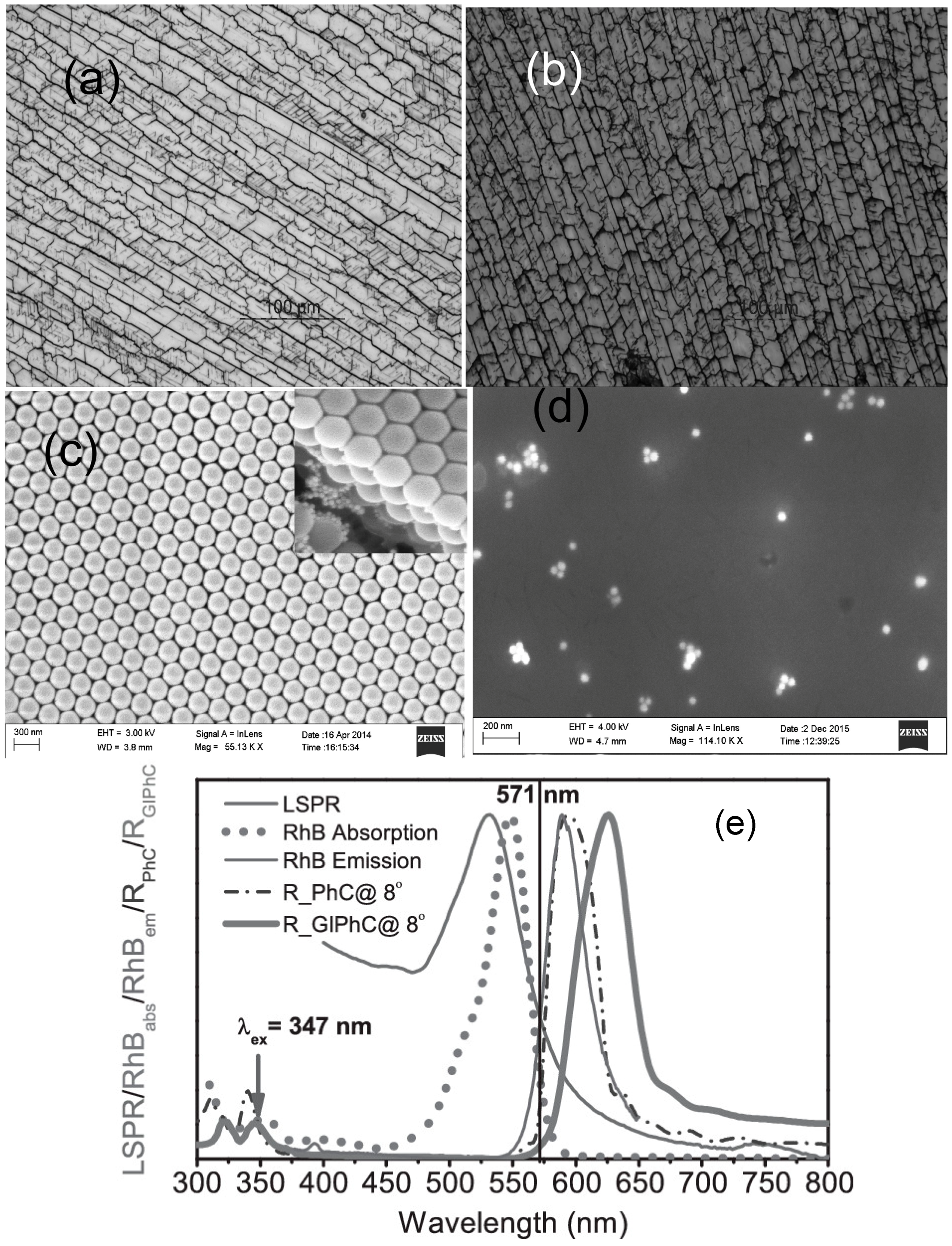 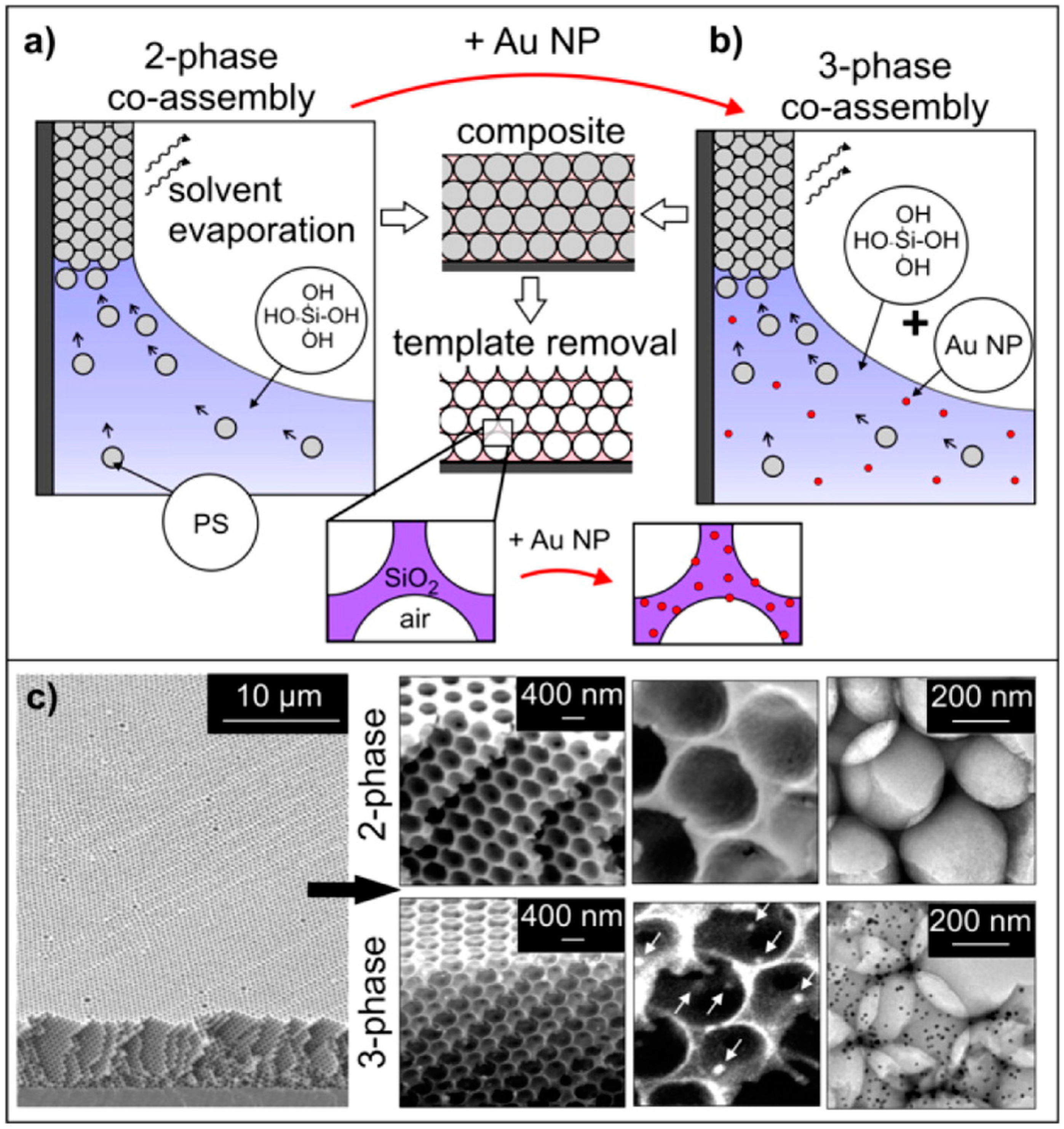