Influence of Substrate Heating and Nitrogen Flow on the Composition, Morphological and Mechanical Properties of SiNx Coatings Aimed for Joint Replacements

Bio-electro-Fenton microbial fuel cells generate energy through the decomposition of organic matter by microorganisms. The generated electricity drives a Fenton reaction in a cathode chamber, which can be used for the decolorization of dye wastewater. Most of the previous works added expensive platinum catalyst to improve the electrical property of the system. In this research, aligned carbon nanotubes (CNTs) were generated on the surface of SS316 stainless steel by chemical vapor deposition, and an iron phthalocyanine (FePc) catalyst was added to fabricate a compound (FePc/CNT/SS316) that was applied to the cathode electrode of the fuel cell system. This was expected to improve the overall electricity generation efficiency and extent of decolorization of the system. The results showed that the maximum current density of the system with the modified electrode was 3206.30 mA/m2, and the maximum power was 726.55 mW/m2, which were increased by 937 and 2594 times, respectively, compared to the current and power densities of a system where only the SS316 stainless steel electrode was used. In addition, the decolorization of RB5 dye reached 84.6% within 12 h. Measurements of the electrical properties of bio-electro-Fenton microbial fuel cells and dye decolorization experiments with the FePc/CNT/SS316 electrode showed good results. View Full-Text
Keywords: bio-electro-Fenton microbial fuel cells; iron phthalocyanine; carbon nanotubes bio-electro-Fenton microbial fuel cells; iron phthalocyanine; carbon nanotubes
►▼ Show Figures 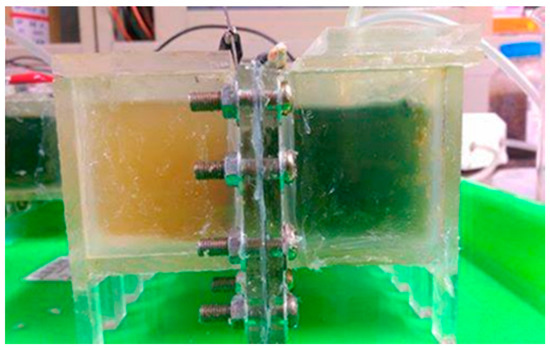