This study assesses the quantitative effects of incorporating high-volume fly ash (HVFA) into tricalcium silicate (C3S) paste on the hydration, degree of silicate polymerization, and Al substitution for Si in calcium silicate hydrate (C–S–H). Thermogravimetric analysis and isothermal conduction calorimetry showed that, although the induction period of C3S hydration was significantly extended, the degree of hydration of C3S after the deceleration period increased due to HVFA incorporation. Synchrotron-sourced soft X-ray spectromicroscopy further showed that most of the C3S in the C3S-HVFA paste was fully hydrated after 28 days of hydration, while that in the pure C3S paste was not. The chemical shifts of the Si K edge peaks in the near-edge X-ray fine structure of C–S–H in the C3S-HVFA paste directly indicate that Al substitutes for Si in C–S–H and that the additional silicate provided by the HVFA induces an enhanced degree of silicate polymerization. This new spectromicroscopic approach, supplemented with 27Al and 29Si magic-angle spinning nuclear magnetic resonance spectroscopy and transmission electron microscopy, turned out to be a powerful characterization tool for studying a local atomic binding structure of C–S–H in C3S-HVFA system and presented results consistent with previous literature. View Full-Text
Keywords: calcium silicate hydrate; tricalcium silicate; fly ash; hydration products; X-ray microscopy calcium silicate hydrate; tricalcium silicate; fly ash; hydration products; X-ray microscopy
►▼ Show Figures 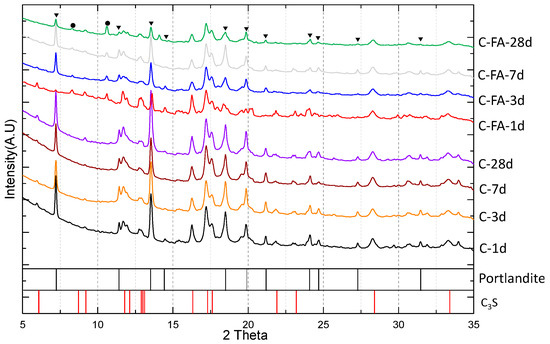