Red pottery clay (RPC) was modified using a silane coupling agent, and the modified RPC (mRPC) was then used to enhance the performance of high-density polyethylene-based wood-plastic composites. The effect of the mRPC content on the performances of the composites was investigated through Fourier transform infrared spectrometry, differential mechanical analysis (DMA) and ultraviolet (UV)-accelerated aging tests. After adding the mRPC, a moisture adsorption hysteresis was observed. The DMA results indicated that the mRPC effectively enhanced the rigidity and elasticity of the composites. The mRPC affected the thermal gravimetric, leading to a reduction of the thermal degradation rate and a right-shift of the thermal degradation peak; the initial thermal degradation temperature was increased. After 3000 h of UV-accelerated aging, the flexural strength and impact strength both declined. For aging time between 0 and 1000 h, the increase in amplitude of ΔL* (luminescence) and ΔE* (color) reached a maximum; the surface fading did not became obvious. ΔL* and ΔE* increased more significantly between 1000 and 2000 h. These characterization results indicate that the chromophores of the mRPC became briefly active. However, when the aging times were higher than 2000 h, the photo-degradation reaction was effectively prevented by adding the mRPC. The best overall enhancement was observed for an mRPC mass percentage of 5%, with a storage modulus of 3264 MPa and an increase in loss modulus by 16.8%, the best anti-aging performance and the lowest degree of color fading. View Full-Text
Keywords: silane coupling agent; red pottery clay; chemical modification; thermo-gravimetric analysis; UV-accelerated aging silane coupling agent; red pottery clay; chemical modification; thermo-gravimetric analysis; UV-accelerated aging
►▼ Show Figures 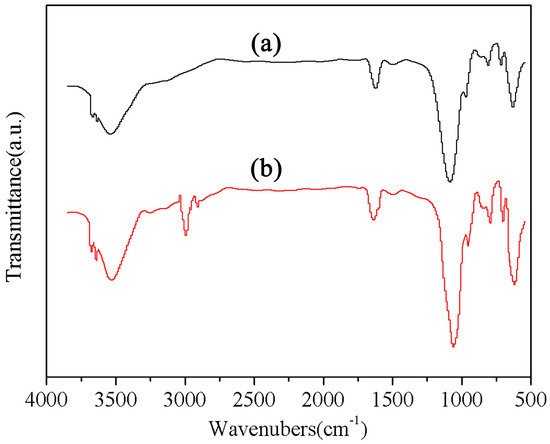