The Many Faces of Graphene as Protection Barrier. Performance under Microbial Corrosion and Ni Allergy Conditions
Previous Article in Journal

Edible Scaffolds Based on Non-Mammalian Biopolymers for Myoblast Growth

In vitro meat has recently emerged as a new concept in food biotechnology. Methods to produce in vitro meat generally involve the growth of muscle cells that are cultured on scaffolds using bioreactors. Suitable scaffold design and manufacture are critical to downstream culture and meat production. Most current scaffolds are based on mammalian-derived biomaterials, the use of which is counter to the desire to obviate mammal slaughter in artificial meat production. Consequently, most of the knowledge is related to the design and control of scaffold properties based on these mammalian-sourced materials. To address this, four different scaffold materials were formulated using non-mammalian sources, namely, salmon gelatin, alginate, and additives including gelling agents and plasticizers. The scaffolds were produced using a freeze-drying process, and the physical, mechanical, and biological properties of the scaffolds were evaluated. The most promising scaffolds were produced from salmon gelatin, alginate, agarose, and glycerol, which exhibited relatively large pore sizes (~200 μm diameter) and biocompatibility, permitting myoblast cell adhesion (~40%) and growth (~24 h duplication time). The biodegradation profiles of the scaffolds were followed, and were observed to be less than 25% after 4 weeks. The scaffolds enabled suitable myogenic response, with high cell proliferation, viability, and adequate cell distribution throughout. This system composed of non-mammalian edible scaffold material and muscle-cells is promising for the production of in vitro meat. View Full-Text
Keywords: biopolymer; edible material; in vitro meat; scaffold biopolymer; edible material; in vitro meat; scaffold
►▼ Show Figures 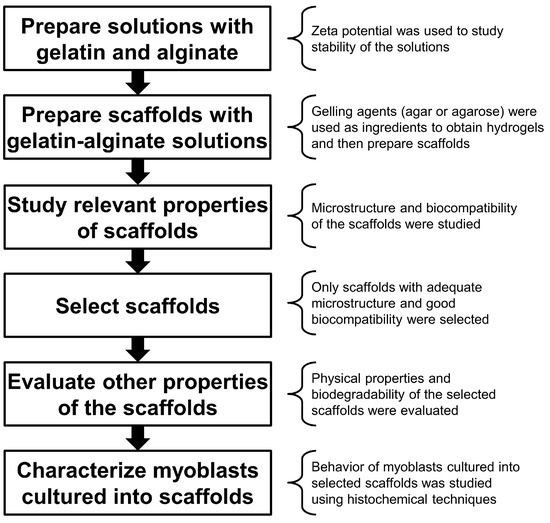