A novel polyethoxysilsesquiazane ([EtOSi(NH)1.5]n, EtOSZ) was synthesized by ammonolysis at −78 °C of ethoxytrichlorosilane (EtOSiCl3), which was isolated by distillation as a reaction product of SiCl4 and EtOH. Attenuated total reflection-infra red (ATR-IR), 13C-, and 29Si-nuclear magnetic resonance (NMR) spectroscopic analyses of the ammonolysis product resulted in the detection of Si–NH–Si linkage and EtO group. The simultaneous thermogravimetric and mass spectrometry analyses of the EtOSZ under helium revealed cleavage of oxygen-carbon bond of the EtO group to evolve ethylene as a main gaseous species formed in-situ, which lead to the formation at 800 °C of quaternary amorphous Si–C–N with an extremely low carbon content (1.1 wt %) when compared to the theoretical EtOSZ (25.1 wt %). Subsequent heat treatment up to 1400 °C in N2 lead to the formation of X-ray amorphous ternary Si–O–N. Further heating to 1600 °C in N2 promoted crystallization and phase partitioning to afford Si2N2O nanocrystallites identified by the XRD and TEM analyses. The thermal stability up to 1400 °C of the amorphous state achieved for the ternary Si-O-N was further studied by chemical composition analysis, as well as X-ray photoelectron spectroscopy (XPS) and 29Si-NMR spectroscopic analyses, and the results were discussed aiming to develop a novel polymeric precursor for ternary amorphous Si–O–N ceramics with an enhanced thermal stability. View Full-Text
Keywords: silicon oxynitride; amorphous state; thermal stability; Polymer-Derived Ceramics (PDCs) silicon oxynitride; amorphous state; thermal stability; Polymer-Derived Ceramics (PDCs)
►▼ Show Figures 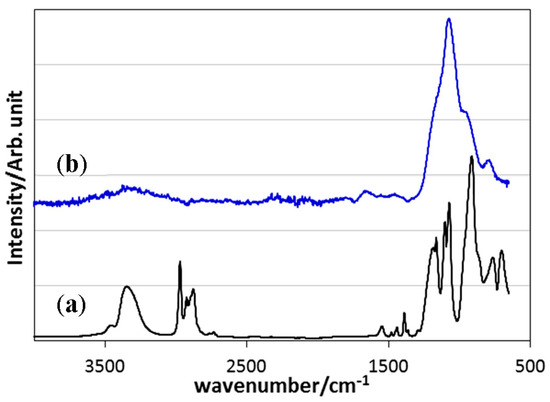