Preparation of Al/Fe-Pillared Clays: Effect of the Starting Mineral

Three-dimensional nitrogen-doped carbon (3D-NCN) has been synthesized via the ionothermal carbonization method using waste soybean dregs (SD) as the precursor. N2 adsorption/desorption isotherms show that the as-prepared 3D-NCN formed a hierarchically porous structure with a specific BET surface area of 1093.4 m2 g−1 and a total pore volume of 1.77 cm3 g−1. The TEM images clearly show that graphene-like carbon sheets were formed on the edge of the networks. The characterization of the samples collected at different temperature indicated that salt melt plays the key role in the formation of the network structure and rich pores. When 3D-NCN is as electrocatalyst for ORR, it shows an onset potential of 0.945 V with a more positive half-wave potential (0.846 V), which is comparable to that of commercial Pt/C. In addition, the long-term cycle results show that the onset potential and half-wave potential only negatively shifted by 6 mV and 8 mV after 10,000 cycles respectively, which are smaller than those values of commercial Pt/C. Due to its high ORR activity, durability, and low-cost, producing 3D-NCN from SD in molten salt medium provides a promising approach to replace the Pt-based catalysts for use in fuel cells. View Full-Text
Keywords: ionothermal carbonization; biomass; N-doped carbon network; non-noble metal catalysts; oxygen reduction reaction ionothermal carbonization; biomass; N-doped carbon network; non-noble metal catalysts; oxygen reduction reaction
►▼ Show Figures 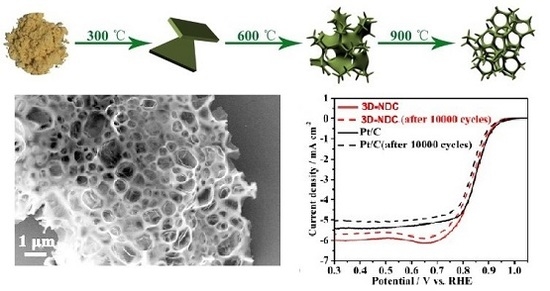