2. Formulation of the Problem

Consider a thin FG-CNTRC truncated conical shells surrounded by elastic foundations, with a thickness of shell , and radii , length and the semi-vertex angle of the cone . The meridional, circumferential, and normal directions of the shell are denoted by and , respectively. A schematic of the shell with the assigned coordinate system and geometric characteristics is shown in Figure 1.

In the present study, the FG-CNTRC material is made of poly(methyl methacrylate), referred to as PMMA, reinforced by (10,10) single-walled carbon nanotubes (SWCNT). The SWCNT reinforcement is either uniformly distributed (UD) or functionally graded (FG) in the thickness direction [11,12]. FG-V, FG-X, and FG-O CNTRC (Figure 2) are the functionally graded distribution of CNTs through the thickness direction of the composite truncated conical shell.
The elastic modules of the FG-CNTRC material are determined as follows [11]:
In the above equations, are the Young’s and shear modulus of the CNT, respectively; are mechanical properties of the matrix, are the CNT efficiency parameters and are the volume fractions of the CNT and the matrix, respectively. The volume fractions of the CNT and the matrix are assumed to change according to the linear functions of the shell thickness. Specifically, the volume fractions of the CNT are expressed as follows:
The effective Poisson’s ratio and mass destiny may be written as [11,28]: where and are Poisson’s ratio and mass destiny of the CNT and the matrix, respectively.
The CNT efficiency parameters used in Equation (1) are estimated by matching Young’s modulus and and the shear modulus of FG-CNTRC material obtained by the extended rule of mixture to molecular simulation results. For various volume fraction of CNTs, these parameters are [11,28,33]: for the case of ; for the case of and for the case of .

The FG-CNTRC truncated conical shell is surrounded by an elastic medium. The reaction–deflection relation of Pasternak foundation is given by [54,55]: where , , is the deflection of the shell, is the Winkler foundation modulus and is the shear layer foundation stiffness of the Pasternak model.

The classical shell theory is used to obtain the motion and compatibility equations of thin FG-CNTRC truncated conical shell in this study.
The strains across the shell thickness at a distance from the mid-plane are:
The strains at the middle surface and the change of curvatures and twist are related to the displacement components in the coordinate directions, respectively [54,55,57]: where and are the normal strains in the curvilinear coordinate directions S and on the reference surface respectively, is the shear strain at the middle surface of the shell, and are the changes of curvatures and twist.
The geometrical compatibility equation of the shells is written as [54,55]:
The stress—strain relations of the shell within the classical shell theory are given as: where the quantities are functions of non-dimensional thickness coordinates and are expressed as:
The force and moment resultants of FG-CNTRC shells are given by:
Integrating the above stress–strain equations, the force and moment resultants of the shell are expressed in terms of the stress components through the thickness as: where the coefficients are calculated by:
The motion equations of a truncated conical shell are based on the classical shell theory [54,55]: where is a parameter of density and is given by:
The first two equations of the system of Equation (12) are identically satisfied by introducing an Airy stress function as follows [54,55,57]:
The reverse relations are obtained from Equation (10); one can write: where:
Substituting Equation (15) into Equations (7) and (10), and the third equation of the system of Equation (12), resulted in two new equations for F and w. For the simplicity of the mathematical operations, the variable is included and is taken into account instead of After lengthy computations, the system of partial differential equations for and can be written in the form with given in Appendix A.
Equation (16) is the basic equation used to investigate the dynamic response of FG-CNTRC truncated conical shells. It is in terms of two dependent unknowns, and .

2.4. The Solution of Basic Equations

In this section, an analytical approach is used to investigate the dynamic response of shells resting on an elastic foundation. The shell is assumed to be simply supported at both edges of the shell.
The boundary conditions can be satisfied when the deflection is approximated as follows [54,55,58]: in which , and is time dependent unknown function of the deflection, is the number of half waves along a generatrix, and is the number of full waves along a parallel circle.
By introducing Equation (18) into Equation (16) and solving the obtained equation by applying the superposition principle, the stress function can be obtained as where the following definitions apply: in which the remaining constants are given in Appendix B.
Applying the Galerkin method with the limits of integral is given by the formula:
After substituting Equations (18) and (19) into Equation (16) and applying the Galerkin method as shown in Equation (20), we obtain the following equation: where the constants are given in Appendix C.

In order to validate the reliability of the method used in the paper, a comparison of the non-dimensional frequency is made with the results of other studies [59,60].
Table 1 shows the comparison of the non-dimensional frequency of the isotropic truncated conical shells with the same geometrical parameters
In this table, the present results are compared with those of Li et al. [59] showing the calculations of natural frequencies and the forced vibration responses of conical shells using the Rayleigh–Ritz method. Lam and Hua presented the influence of boundary conditions on the frequency characteristics of a rotating truncated circular conical shell [60]. From this table, as can be seen, a good agreement is obtained in this comparison. A similar comparison is shown in [33].

3.2. The Natural Frequency and Dynamic Response

This paper studies the dynamic response and vibration of FG-CNTRC truncated conical shells resting on elastic foundations based on the classical shell theory. The following conclusions are obtained from this study:

This research is funded by Vietnam National Foundation for Science and Technology Development (NAFOSTED) under grant number 107.02-2015.03. The authors are grateful for this support.

All authors have been collaborating with each other to obtain a high-quality research output. 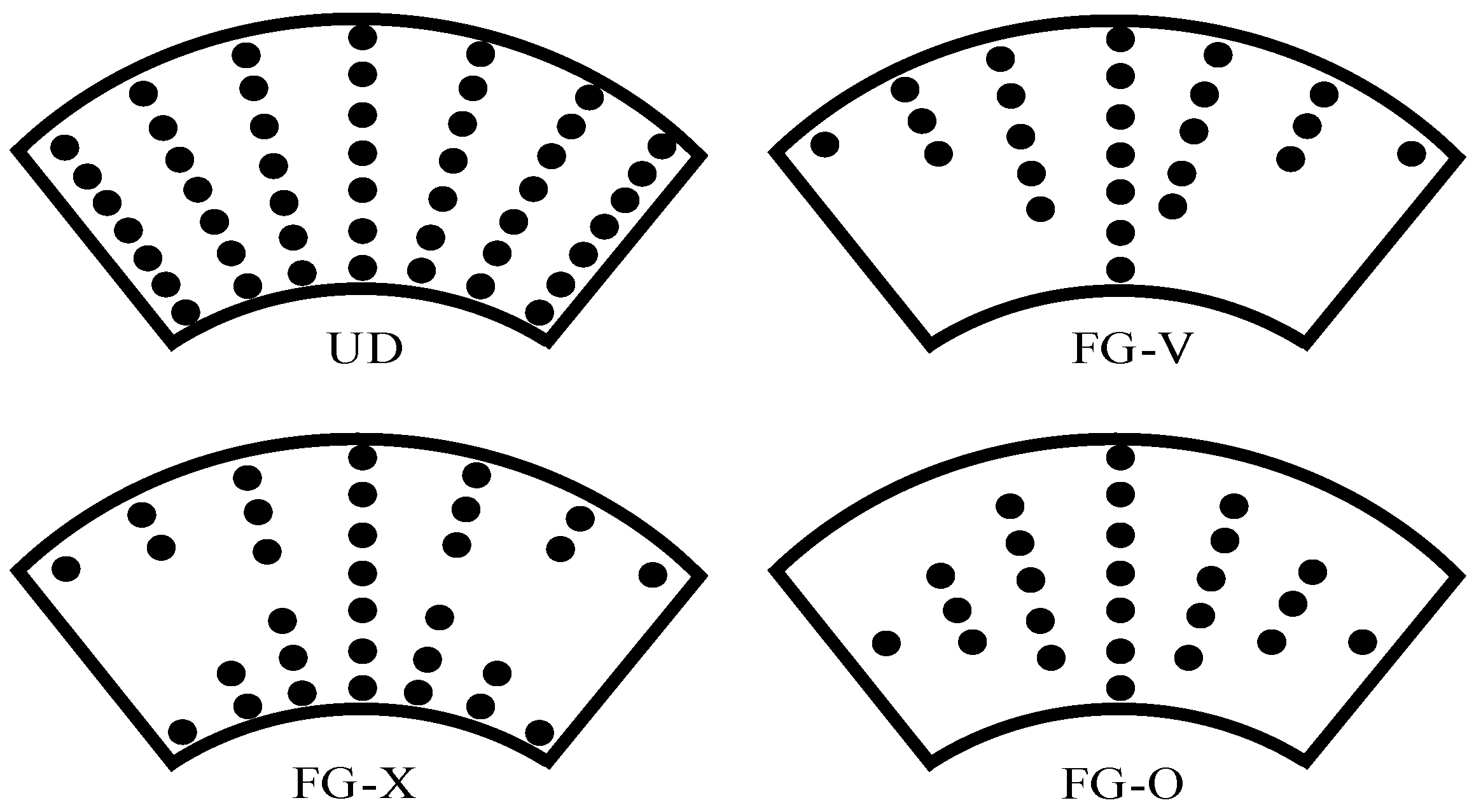 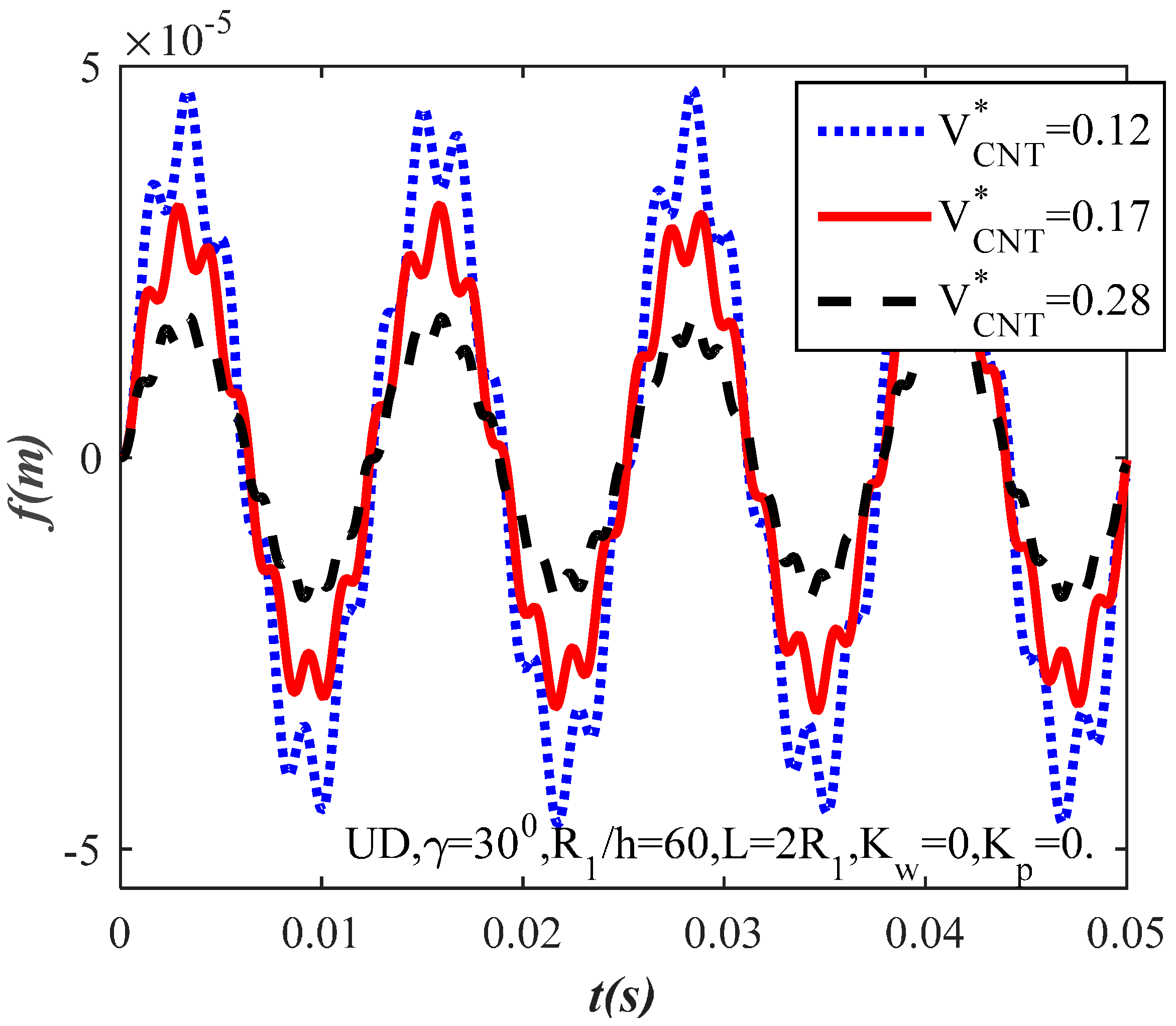 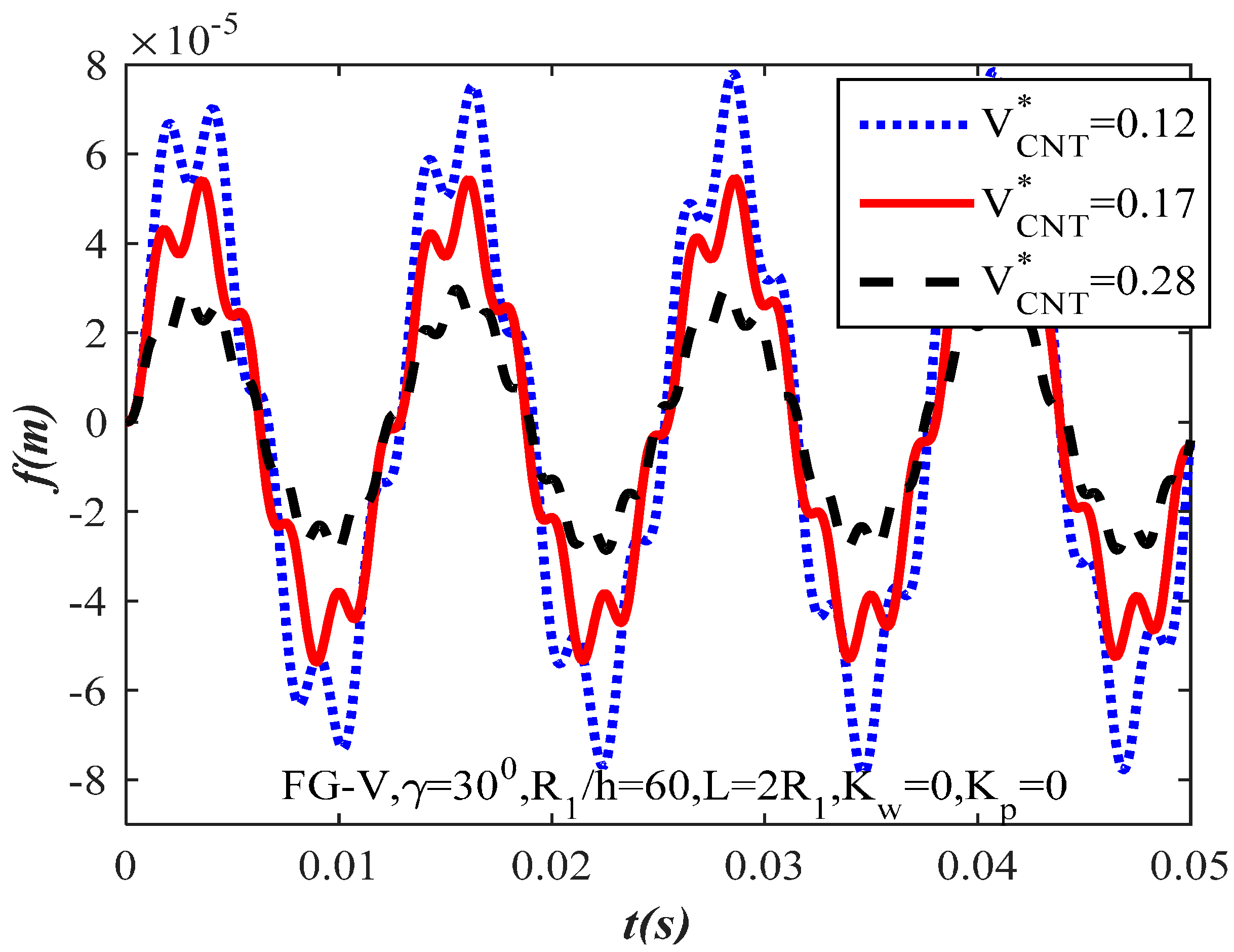