Biomaterials and Tissue Biomechanics: A Match Made in Heaven?
Previous Article in Journal

Finite element modeling has been widely used to simulate the mechanical behavior of the intervertebral disc. Previous models have been generally limited to the prediction of the disc behavior under simple loading conditions, thus neglecting its response to complex loads, which may induce its failure. The aim of this study was to generate a finite element model of the ovine lumbar intervertebral disc, in which the annulus was characterized by an anisotropic hyperelastic formulation, and to use it to define which mechanical condition was unsafe for the disc. Based on published in vitro results, numerical analyses under combined flexion, lateral bending, and axial rotation with a magnitude double that of the physiological ones were performed. The simulations showed that flexion was the most unsafe load and an axial tensile stress greater than 10 MPa can cause disc failure. The numerical model here presented can be used to predict the failure of the disc under all loading conditions, which may support indications about the degree of safety of specific motions and daily activities, such as weight lifting. View Full-Text
Keywords: finite element analysis; intervertebral disc; ovine model; herniation; annulus fibrosus; anisotropic hyperelastic finite element analysis; intervertebral disc; ovine model; herniation; annulus fibrosus; anisotropic hyperelastic
►▼ Show Figures 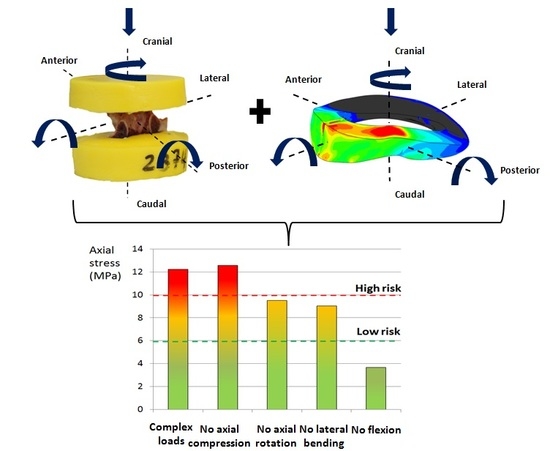