Heavy-oil resources represent a large percentage of global oil and gas reserves, however, owing to the high viscosity, enhanced oil recovery (EOR) techniques are critical issues for extracting this type of crude oil from the reservoir. According to the survey data in Oil & Gas Journal, thermal methods are the most widely utilized in EOR projects in heavy oil fields in the US and Canada, and there are not many successful chemical flooding projects for heavy oil reported elsewhere in the world. However, thermal methods such as steam injection might be restricted in cases of thin formations, overlying permafrost, or reservoir depths over 4500 ft, for which chemical flooding becomes a better option for recovering crude oil. Moreover, owing to the considerable fluctuations in the oil price, chemical injection plans should be employed consistently in terms of either technical or economic viewpoints. The numerical studies in this work aim to clarify the predominant chemical injection schemes among the various combinations of chemical agents involving alkali (A), surfactant (S) and polymer (P) for specific heavy-oil reservoir conditions. The feasibilities of all potential injection sequences are evaluated in the pre-evaluation stage in order to select the most efficient injection scheme according to the variation in the oil price which is based on practical market values. Finally, optimization procedures in the post-evaluation stage are carried out for the most economic injection plan by an effective mathematic tool with the purpose of gaining highest Net Present Value (NPV) of the project. In technical terms, the numerical studies confirm the predominant performances of sequences in which alkali-surfactant-polymer (ASP) solution is injected after the first preflushing water whereby the recovery factor can be higher than 47%. In particular, the oil production performances are improved by injecting a buffering viscous fluid right after the first chemical slug rather than using a water slug in between. The results of the pre-evaluation show that two sequences of the ASP group have the highest NPV corresponding to the dissimilar applied oil prices. In the post-evaluation, the successful use of response surface methodology (RSM) in the estimation and optimization procedures with coefficients of determination R2 greater than 0.97 shows that the project can possibly gain 4.47 $MM at a mean oil price of 46.5 $/bbl with the field scale of a quarter five-spot pattern. Further, with the novel assumption of normal distribution for the oil price variation, the chemical flooding sequence of concurrent alkali-surfactant-polymer injection with a buffering polymer solution is evaluated as the most feasible scheme owing to the achievement of the highest NPV at the highly possible oil price of 40–55 $/bbl compared to the other scheme. View Full-Text
Keywords: chemical flooding; heavy oil; alkaline-surfactant-polymer flooding; response surface methodology; optimization; EOR chemical flooding; heavy oil; alkaline-surfactant-polymer flooding; response surface methodology; optimization; EOR
►▼ Show Figures 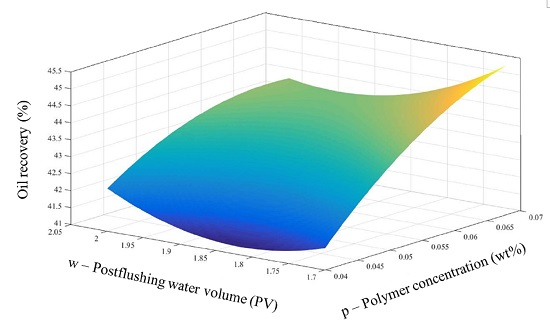