In this paper, a reconfigurable mesh-tree with a disjoint hierarchical routing protocol for the Bluetooth sensor network is proposed. First, a designated root constructs a tree-shaped subnet and propagates parameters k and c in its downstream direction to determine new roots. Each new root asks its upstream master to start a return connection to convert the first tree-shaped subnet into a mesh-shaped subnet. At the same time, each new root repeats the same procedure as the designated root to build its own tree-shaped subnet, until the whole scatternet is formed. As a result, the reconfigurable mesh-tree constructs a mesh-shaped topology in one densely covered area that is extended by tree-shaped topology to other sparsely covered areas. To locate the optimum k layer for various sizes of networks, a peak-search method is introduced in the designated root to determine the optimum mesh-tree configuration. In addition, the reconfigurable mesh-tree can dynamically compute the optimum layer k when the size of the network changes in the topology maintenance phase. In order to deliver packets over the mesh-tree networks, a disjoint hierarchical routing protocol is designed during the scatternet formation phase to efficiently forward packets in-between the mesh-subnet and the tree-subnet. To achieve the energy balance design, two equal disjoint paths are generated, allowing each node to alleviate network congestion, since most traffic occurs at the mesh-subnet. Simulation results show that the joint reconfigurable method and routing algorithm generate an efficient scatternet configuration by achieving better scatternet and routing performance than BlueHRT (bluetooth hybrid ring tree). Furthermore, the disjoint routing with rechargeable battery strategy effectively improves network lifetime and demonstrates better energy efficiency than conventional routing methods. View Full-Text
Keywords: bluetooth; scatternet formation; topology configuration; routing; energy harvesting bluetooth; scatternet formation; topology configuration; routing; energy harvesting
►▼ Show Figures 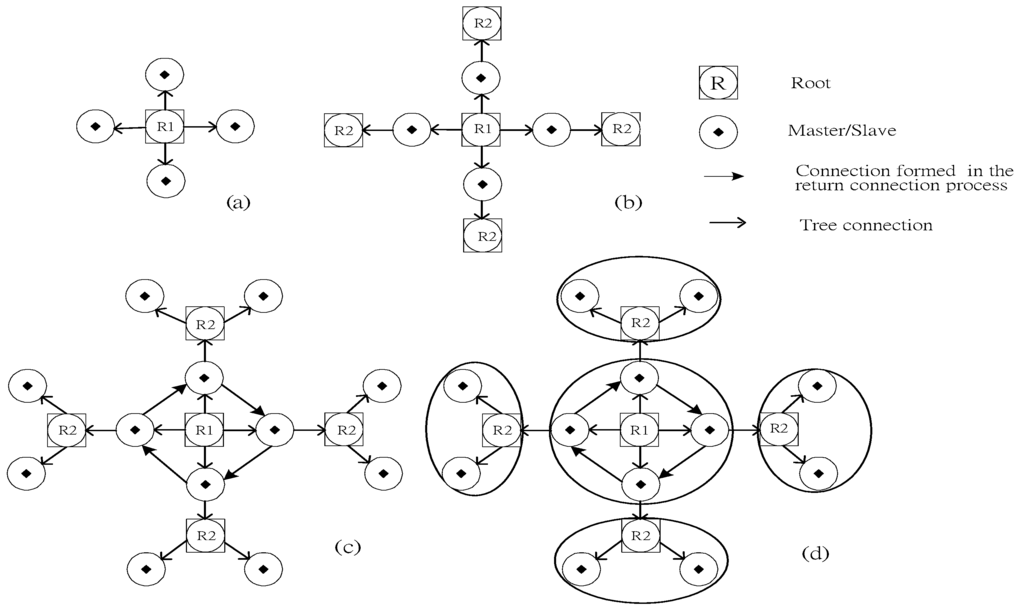