Continuous Bioethanol Production by Fungi and Yeast Working in Tandem

Biofuel is considered one of the most viable alternatives to fossil fuels derived from the dwindling petroleum resources that damage the environment. Bioethanol could be manufactured from agricultural wastes, thus providing inexpensive natural resources. Several strategies have been utilized to convert lignocellulosic hydrolysate to bioethanol with various suspended microorganisms. In this study, we alternatively propose to encapsulate these microorganisms in bioreactor setups. An immobilized cell system can provide resistance to the inhibitors present in hydrolysates, enhance productivity, facilitate the separation process, and improve microorganism recycling. Herein, we developed a continuous bioethanol production process by encapsulating three types of micro-organisms: T. reesei, S. cerevisiae, and P. stipitis. These microorganisms were encapsulated in SBP (“Small Bioreactor Platform”) capsules and tested for their viability post encapsulation, biological activity, and bioethanol production. Encapsulating microorganisms in SBP capsules provided a confined protective environment for the microorganisms, facilitated their acclimation, and ensured their long-term prosperity and activity. An additional significant benefit of utilizing SBP capsules was the simultaneous availability of saccharification and fermentation over a very long time—about 2.5–3 months—with no need to renew the cells or encapsulating matrices. Two different configurations were tested. The first one consisted of columns packed with fungal cells and specific yeast cells together. In the second configuration, the fungal cells were separated from the yeast cells into two columns in series. The presented systems achieved an efficiency of 60–70%, suggesting the long-term prosperity and uninterrupted metabolic activity of the microorganisms. View Full-Text
Keywords: bioethanol; T. reesei; S. cerevisiae; P. stipitis; small bioreactor platform capsules bioethanol; T. reesei; S. cerevisiae; P. stipitis; small bioreactor platform capsules
►▼ Show Figures 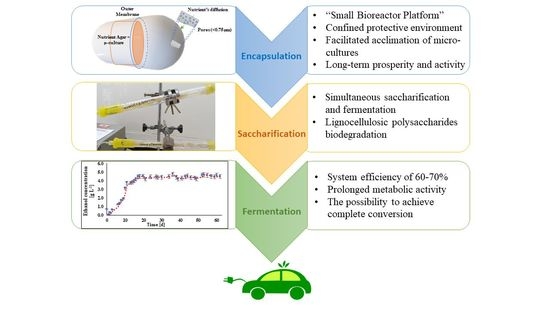