The RES in the Countries of the Commonwealth of Independent States: Potential and Production from 2015 to 2019

Amidst the changes and adjustments of the international energy situation, the leading trend is to shift from fossil fuels to low-carbon fuels, and ultimately, to enter the era of sustainable energy, based mainly on renewable energy. The ongoing changes in global security of energy supply and the high volatility of fossil energy prices also stimulate investment in alternative energy sources, making renewable energy sources (RES) one of the rapidly growing elements in the global energy system. This article fills the research gap by analyzing the potential of using renewable energy in the countries of the Commonwealth of Independent States (CIS) in the years 2015–2018. The authors address the energy potential in the years 2015–2019, and energy consumption in the years 2015–2018 as the potential of RES in the CIS countries was not researched after 2014. Please note that the study covers the CIS countries, along with Georgia and Ukraine, which are no longer formal members of the Community, but have been included for cognitive and comparative purposes. Upon comparing the increase in energy production in the CIS countries to the average increase for the European Union (EU) countries, the value of this increase is observably higher than the average for the EU countries only in Ukraine. However, the average for the entire CIS is much lower than the EU average, therefore in CIS countries, the changes in the volume of RES energy production are varied. In some countries, there is a significant increase in the production of this type of energy (e.g., Ukraine, Kyrgyzstan, Belarus, Kazakhstan, Georgia). However, there are also countries in which the changes are negligible, or which noted significant drops in RES energy production (Uzbekistan, Moldova, Russia, Armenia). The findings contribute to the RES market debate and the international relations theory by comparing political factors with territorial and economic factors. View Full-Text
Keywords: renewable energy source (RES); international cooperation; effectiveness; management; Commonwealth of Independent States renewable energy source (RES); international cooperation; effectiveness; management; Commonwealth of Independent States
►▼ Show Figures 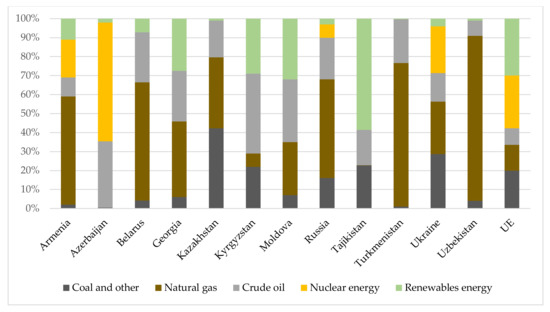