Economics of Grid-Tied Solar Photovoltaic Systems Coupled to Heat Pumps: The Case of Northern Climates of the U.S. and Canada

A systems diagram of the building energy system is shown in Figure 2, with electricity flows in green and thermal flows in red/blue. It is a typical grid connected PV system, where PV generation (Epv) is used first to service loads in the building (Eapp, Ehp) and excess is sold to the grid (Egrid,out). During times of no PV generation, building loads are serviced with grid electricity (Egrid,in). As the systems are net-zero energy, where the annual PV generation matches the annual demand, Egrid,in and Egrid,out are equal and opposite over the year. The configuration shown in Figure 2, which includes the heat pump, specifically maps to systems v/vi. Removing the PV system and relying only on electric grid supply represents systems iii/iv. Systems i/ii keep the PV but replacing the heat pump with gas heating supply, leading to smaller PV capacities to maintain net-zero energy.

The average Michigan residential annual energy consumption is 123 million BTUs (1.3 × 1011 J) [46]. Space heating makes up 55% of this amount, meaning the average Michigan resident uses 67.65 million BTUs (7.1 × 1010 J) for space heating [46]. Using the ten-year average monthly heating degree data for the eastern UP, the monthly space heating demand is approximated [47]. Then, the monthly fuel cost for a natural gas furnace of typical new modern high efficiency [48] is calculated. It should be noted that this is a conservative estimate for most home owners with 95% being on the high end, AFUE ratings still overpredicts real-world performance and the population in the region being economically depressed are likely to favor 80% efficiency non-condensing furnaces because of their lower capital costs [49]. For a regionally appropriate heat pump efficiency, the method determined by Fairey et al. (2004) [50] for calculating a local HSPF using the ASHRAE 1% design temperature for Sault Ste. Marie [51] and a nameplate HSPF of 10 was used. Thus, the required electricity demand (Ehp in kWhs per month) given the required thermal demand (BTUs per month) was calculated. This additional electric load is then added and normalized to U.S. National Renewable Energy Lab’s (NREL) load profile for Sault Ste. Marie, MI (Eapp) to determine monthly and annual cost for the three utility rate structures [52]. Finally, from personal communication with local pluming contractors, the cost to replace a natural gas furnace with air source heat pump for a typical 2000 square foot (186 m2) home was estimated to be USD$6000–7000.

The costs to electrify heating with a heat pump are summarized in Table 2. In Table 2, the weighted unit price for PUC Tiered is based on the proportion of electricity in each price bin for each month. Weighted unit for Union is the proportion gas in each price bin for each month. Cloverland and DTE are flat unit prices. Cost per year assumes 67.65 million British Thermal Units (BTU) (7.1 × 1010 J) consumed in space heating in a year. BTU is the standard unit of thermal energy used in the U.S. Heating load by month determined by two-year average of heating degree days for Sault Ste. Marie. Cost per year for heat pumps does not include monthly customer charge as residents would be paying for this already. Cost per year for furnaces does include monthly customer charge as replacing a furnace with a heat pump could mean discontinuing natural gas service. The heating seasonal performance factor (HSPF) is used as a measure of the efficiency of air source heat pumps and is defined as the ratio of heat output (measured in BTUs as is standard in the industry in North America) over the heating season to electricity used (measured in watt-hours). In parenthesis with HSPF is the same metric considering heat output and electricity used both in kilowatt-hours. For the furnaces, the thermal efficiency used was the annual fuel utilization efficiency (AFUE) that represents the actual, season-long, average efficiency of the furnace and is the ratio of useful energy output to energy input.

PV generation and economic analysis was conducted with the National Renewable Energy Lab’s open source System Advisor Model (SAM) software [53] using the input parameters found in Table 3. The region is relatively flat and all systems were assumed to be on level ground and unshaded. All systems were ground mounted, fixed tilt, and grid tied to eliminate complexities of roof suitability and nuances. Similarly, all heat pumps (HP) were air source so that local conditions would not play a factor in the installation of a ground source heat pump. The six systems simulated include:
For each PV system the total cost is calculated. Then, economics for a home owner in all six scenarios are determined for systems (1) without PV, (2) those with PV, (3) homes without PV and gas without a heat pump (HP), (4) homes with combined utilities with PV and without a heat pump, (5) homes with combined utilities without PV and without a heat pump, and finally (6) homes with combined utilities with PV and a heat pump. The solar resources are acquired from the National Solar Radiation Database (NSRDB) [54].
Finally, the net savings, year one return on investment (ROI), simple payback calculated in years, and the internal rate of return (IRR) are determined. Simple payback for the PV+HP is calculated in comparison to the no PV and no HP case, based on the annual value of the PV generation minus the cost difference between heating with gas and a HP.

This study has shown that residents of both northern Michigan and Southern Ontario can profitably install residential solar to provide for all of their electric needs. PV systems to meet average loads were 6.9 kW without a HP and more than tripled to 20.6 kW to provide the needed electricity for the HP. Annually, these PV systems would produce 9130 kWh for the PV system alone and 20,611 kWh for the PV system to cover the HP additional load. The costs of PV and HP have been reduced enough that they now positive economic investments that yield a net savings and year one return on investments that are all in the single digits and range from 2.9% to 5.1%. In the current policy regime and current costs, an American installing a PV+HP would enjoy an internal rate of return of 3.4% and in Canada a PV+HP system would earn 0.6%. The IRR is higher for the PV alone, but the PV+HP systems provides not only a positive IRR and reduce the risk of natural gas price escalations in the future, but also eliminate all carbon emissions from heating. The current U.S. ITC has a large impact on the economics of PV systems, where alone the inclusion of the ITC in the U.S. increases the IRR by more than 1.7% and decreases the payback time by 3.8 years. Maintaining this ITC reduces the costs of the PV+HP systems by ten thousand dollars, which is approximately enough to be invested by the average American savings. In Ontario, the PV+HP systems IRR goes from marginally positive to economically attractive when the electricity savings are substantially enhanced with TOU pricing instead of the tiered rates. Converting from tiered to TOU will encourage load shifting that will decrease electric costs as well as PV+HP investing that has the potentially to radically reduce GHG emissions. Thus, policies encouraging TOU pricing would be expected to be both economically and environmentally beneficial as well as accelerate the electrification of the heating system.
The results of this study clearly show that for the first-time consumers can both electrify their heating loads using a heat pump and still profitably power their homes with solar energy in North America. This gives northern homeowners a clear and simple method to reduce their GHG emissions by making an investment that pays for itself over time. The current economics of these systems are not only positive, they are higher than what consumers can earn on their savings accounts and potentially CDs or GICs. It is time to stop emphasizing renewable energy costs, but rather start considering both residential PV and solar-powered heat pumps as 25-year investments in financial security and environmental sustainability.

This research was supported by the Witte Endowment.

The authors would like to acknowledge technical support from D. Cramer, helpful conversations with A. Kantamneni. 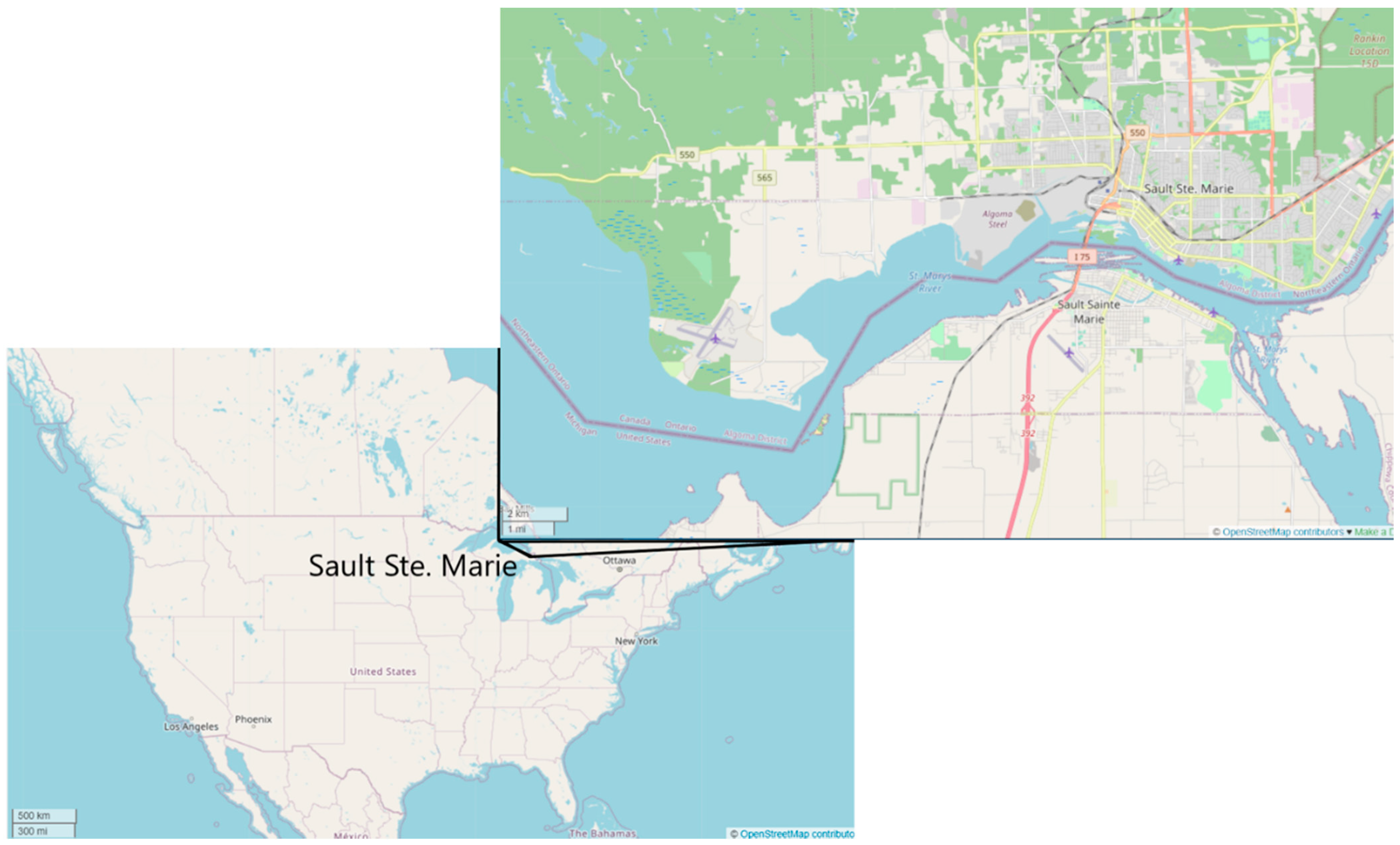 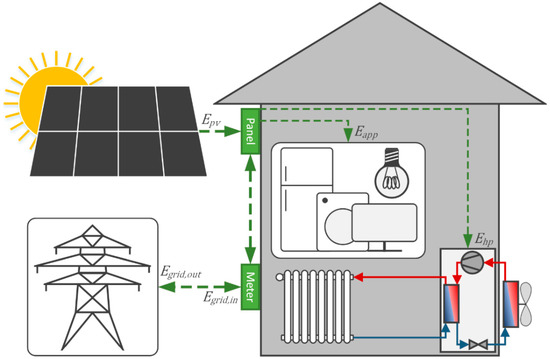 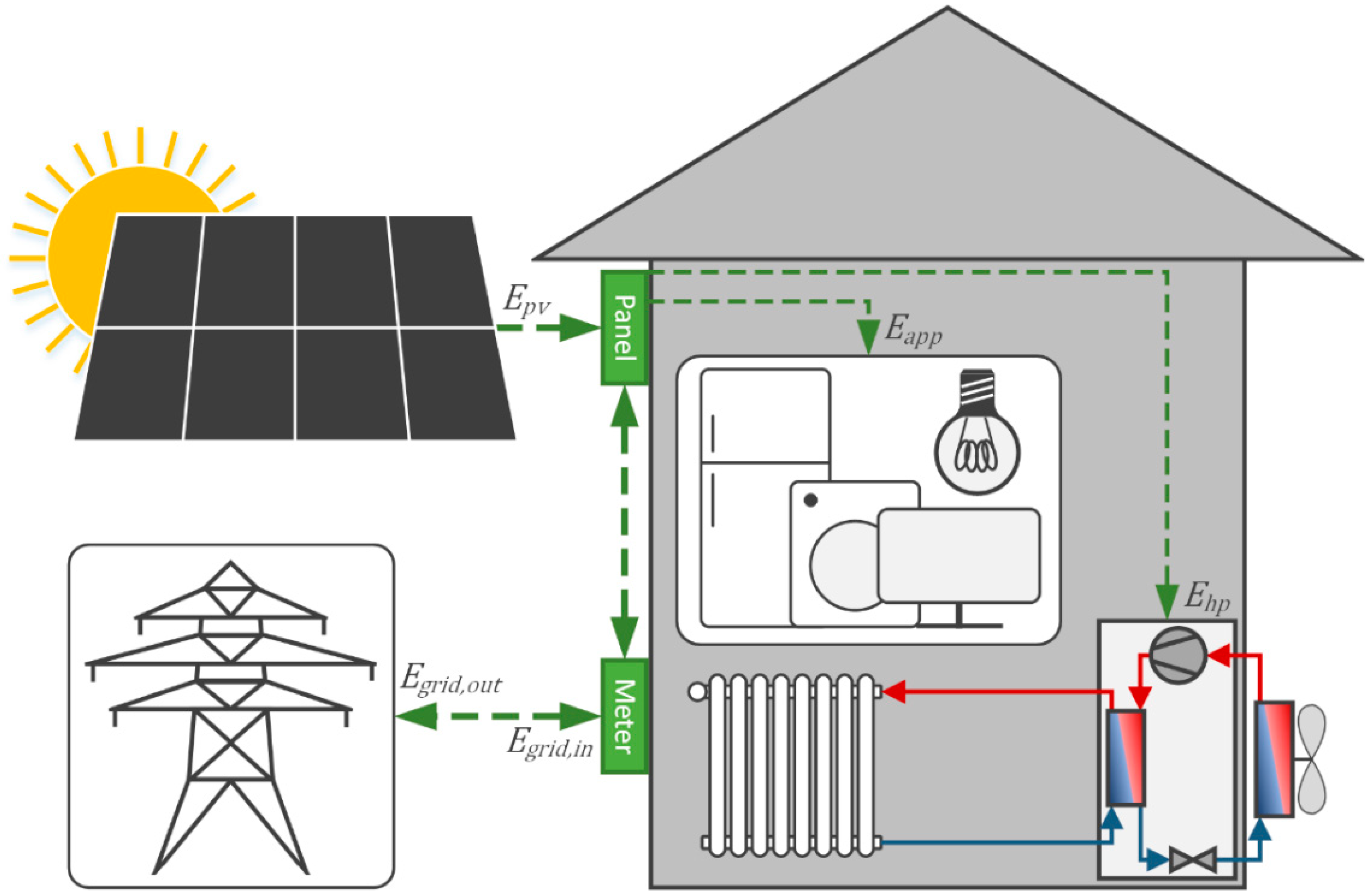 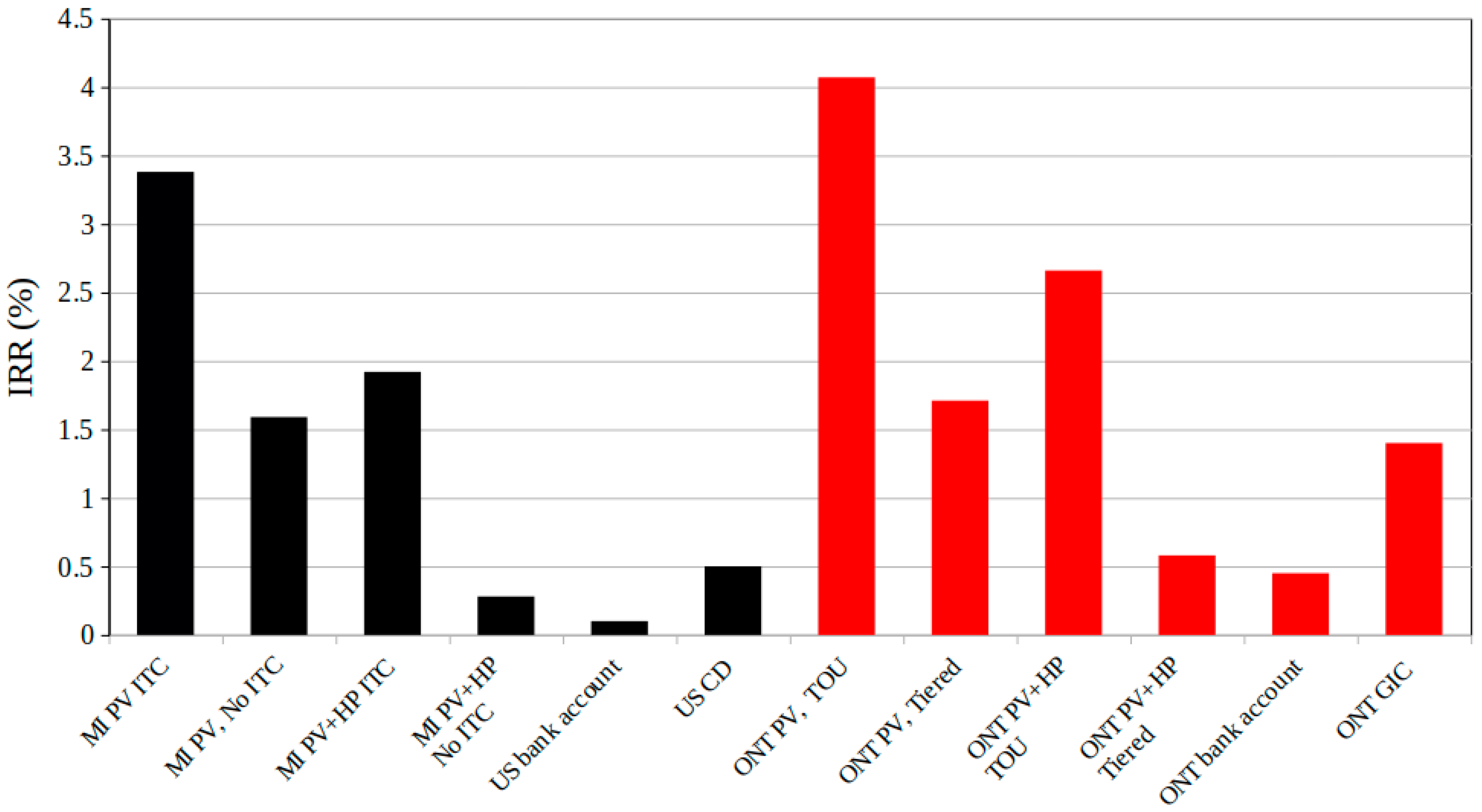