This paper focuses on the influence of ramp locations upstream of a strut-based scramjet combustor under reacting flow conditions that are numerically investigated. In contrast, a computational study is adopted using Reynolds Averaged Navier Stokes (RANS) equations with the Shear Stress Transport (SST) k-ω turbulence model. The numerical results of the Deutsches Zentrum für Luft- und Raumfahrt or German Aerospace Centre (DLR) scramjet model are validated with the reported experimental values that show compliance within the range, indicating that the adopted simulation method can be extended for other investigations as well. The performance of the ramps in the strut-based scramjet combustor is analyzed based on parameters such as wall pressures, combustion efficiency and total pressure loss at various axial locations of the combustor. From the numerical shadowgraph, more shock interactions are observed upstream of the strut injection region for the ramp cases, which decelerates the flow downstream, and additional shock reflections with less intensity are also noticed when compared with the DLR scramjet model. The shock reflection due to the ramps enhances the hydrogen distribution in the spatial direction. The ignition delay is noticed for ramp combustors due to the deceleration of flow compared to the baseline strut only scramjet combustor. However, a higher flame temperature is observed with the ramp combustor. Because more shock interactions arise from the ramps, a marginal increase in the total pressure loss is observed for ramp combustors when compared to the baseline model. View Full-Text
Keywords: strut injection; ramp; hydrogen jet; computational fluid dynamics (CFD); scramjet; combustion efficiency strut injection; ramp; hydrogen jet; computational fluid dynamics (CFD); scramjet; combustion efficiency
►▼ Show Figures 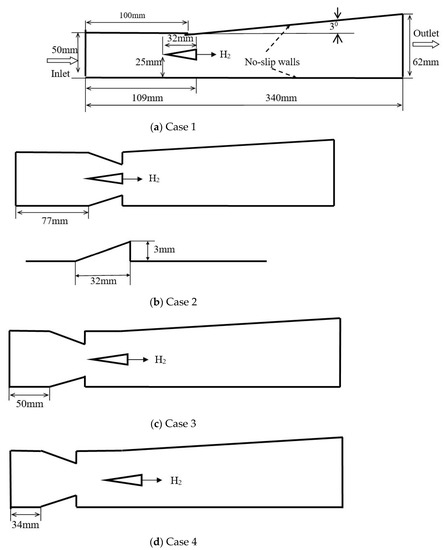