Diamond mining (as all manners of mining) can be divided into three stages: exploring, mining, and processing. The last two stages are responsible for enormous resource consumption (gasoline, electricity, water, etc.).
Diamond mining is also a highly technological process and one intimately related to ecology. It is no wonder that the indicator of its ecological impact is one of the most important figures in annual reports of diamond mining companies. Our analysis of the energy and water consumption per carat of mined diamonds is based on the data sourced from ALROSA [17,18] and is presented in Table 1.
Table 1 shows that the average energy consumption between 2014 and 2020 was 96 kWh/ct. Furthermore, there was an improvement in the water intake over these seven years: according to the report, water intake decreased by more than five times, from 0.676 m3/ct to 0.125 m3/ct (ALROSA Group). We will use the figures from 2018 as the most appropriate reference point for comparison with other diamond-production methods, as it is not foreseen that water intake will return to previous levels but will remain at the 2018 level of 0.077 m3/ct.
The working paper of Ali [6] provides an energy usage value, taken from a DeBeers report, of 0.289 GJ/ct (80.28 kWh/ct), however, the values stated in the official DeBeers report are different (Table 2).
The DeBeers average energy usage between 2015 and 2018 was about 150 kWh/ct, which is almost twice as high as the value stated by Ali [6].
We need to mention that we did not analyze the water intake of DeBeers. Our water consumption values for diamond mining are therefore estimated from ALROSA reporting alone.
Considering that more than half of the global mined-diamonds market is controlled by ALROSA and DeBeers (Table 3), we decided to focus on the data from these two companies. However, because there is a substantial gap between the energy usage values stated in the official reports of ALROSA and DeBeers (96 kWh/ct and 150 kWh/ct, respectively), we use these data separately, without averaging them. Moreover, it is important to mention that the climate of eastern Siberia (where the main ALROSA fields are) and that of southern Africa (the home territory of DeBeers) are very different. This is an additional factor against the averaging of data.

This paper focuses on diamond-producing methods in the context of energy usage and water intake. Table 4 summarizes all our findings.
Table 4 shows the energy usage and water intake required per carat to obtain diamonds by three different methods–mining, HPHT, and 2.45-GHz M-CVD. The water intake of the world’s second-largest diamond maker was not analyzed. Furthermore, the energy usage of lab-grown diamonds is highly dependent on the technical specifications mentioned in the table.
The HPHT method is generally more efficient in terms of energy use and water intake. Energy consumption of the popular lab-growth method, 2.45-GHz M-CVD, can significantly vary from 77 to 215, as you see in Table 4. Such differences can be explained by choosing some technological parameters, for example, cooling system, time synthesis, reactor capacity, etc. Our M-CVD process demands more energy per carat than both HPHT and mining, and it also requires clean water for synthesis.
Of the three methods, the mining conducted by ALROSA and DeBeers is second-most efficient in energy savings (see Table 4 or Figure 5)–mining operations of these companies are 2.3 and 1.4 times more efficient than our 2.45-GHz M-CVD method, though they require massive amounts of water (about 0.077 m3/ct according to ALROSA reports), which is incomparably higher than all lab-growth processes. In M-CVD methods, it is possible to achieve energy efficiency similar to or even higher than mining using optimal technological conditions as confirmed by Ekati Mine and IIa Technology companies.
In addition, we have compared the number of various components required to start obtaining diamonds via the three methods (Table 5).
Table 5 shows that each method has its advantages and disadvantages; however, the attractiveness of 2.45-GHz MP CVD technologies is based on economic reasons, not ecological. As mentioned above, chemical vapor deposition provides a rare opportunity for business people and researchers to synthesize diamonds without enormous capital expenditures. Furthermore, all lab-growing methods are flexible in terms of location–they do not need fresh water sources or significant industrial areas.
It should be mentioned that the use of methane as a source of carbon in CVD reactors creates additional risks due to its explosive nature. Although not directly related to energy or water consumption, this attribute of CVD must be noted. The usage of graphite as a carbon source in the HPHT process is safe, which is an additional plus of this technology.
Nevertheless, hydrogen is more dangerous the CH4, because the molecule is light and small, therefore easily prone to leakage.

Even though diamond mining consumes much water, it does not contaminate the water used in the mining process. Diamond factories mostly use water to wash away clay and expose the diamonds–the vast majority of water-based stages do not involve any chemical reagents. Gold miners, by comparison, use cyanides to chemically extract gold from ore, while diamond miners never use cyanides. However, small amounts of strong acids are always applied in the chemical extraction of diamonds, in its final stage; after all, water-based processes have been carried out.
Furthermore, the vast majority of electricity consumed by ALROSA is created through Clean Energy–86% of it is generated in hydroelectric stations, including the Joint Stocks Company “Vilyuiskaya Hydro Power Plant-3” and “Hidrochicapa” S.A.R.L that is a part of the ALROSA Group in eastern Siberia (Yakutia) and southern Africa (Angola), respectively. This should be mentioned to emphasize the complexity of the ecological impacts of mining companies. However, we analyzed only direct energy usage, regardless of whether it is sourced from fossil fuels or hydroelectric stations (clean energy).
In addition, we did not analyze the use of acids in the three diamond processes, although acids are indeed essential for both HPHTand mining. Acids are sometimes used in CVD methods but in relatively smaller amounts. After CVD synthesis, acids or laser cutting are helpful in debilitating parasitic polycrystalline jackets (see Figure 6) that form on CVD diamonds. This constitutes a preparation stage for further operations.
However, as mentioned above, strong acids in the final stages of all three methods do not significantly impact energy or water consumption.

It is important to note that our energy and water consumption estimations for lab-growing technologies are based on many assumptions related to each described method’s technical parameters. For instance, we assumed an open cooling circuit for the HPHT estimations, but if we changed this to a closed-cooling circuit, the figures would be closer to those provided by ALROSA. Moreover, if we added nitrogen to either the HPHT or CVD processes, the energy indicators would drop significantly. Moreover, only 2.45-GHz M-CVD reactors were investigated, which differ significantly from 915-MHz analogs. Therefore, we hope that our paper will be taken into account the authors’ observations, not as a set of imperatives.
We consciously avoided the commercial aspects of diamond manufacturing, such as the price ratio between mined and lab-grown diamonds or the price divergence between a 300-kg M-CVD reactor and 68-ton modern HPHT 850 mm-press, the commercial aspect was beyond the scope of this paper.

This article summarizes our observations and clarifies some of the differences between mined and lab-grown diamonds. According to our estimations based on open-source data, using the HPHT method to fabricate medium-sized (near-) colorless diamonds, with the help of an open cooling circuit, is ~2.6 and ~4.2 times more energy efficient (36 kWh/ct) than mining and processing methods used by ALROSA (96 kWh/ct) and DeBeers (150 kWh/ct), respectively. Our M-CVD reactor, which uses a 2.45-GHz magnetron and water as a refrigerant, is 2.3 and 1.4 times less energy efficient than the figures reported by ALROSA and DeBeers, respectively (215 kWh/ct vs. 96 kWh/ct and 150 kWh/ct). However, this estimation only applies to single-crystal M-CVD synthesis and would be different for multi-growths or polycrystalline synthesis. Also, energy consumption will depend on the type of machine used and the conditions chosen. M-CVD method of individual synthetic company IIa Technology is 1.3 and 2.0 times more energy-efficient than the figures reported by ALROSA and DeBeers, respectively (77 kWh/ct vs. 96 kWh/ct and 150 kWh/ct). M-CVD method of Ekati Mine company is 1.5 times less energy efficient than ALROSA (143 kWh/ct vs. 96 kWh/ct) and is 1.05 times more energy efficient than reported by DeBeers (143 kWh/ct vs. 150 kWh/ct).
The HPHT and CVD methods are essentially water-less (0 and 0.002 m3/ct, respectively), with mined diamonds being responsible for greater resource consumption: slightly less than 0.077 m3/ct according to the ALROSA report of 2018.
We cannot say that all lab-grown diamonds should be inherently preferable over mined ones because energy and water consumption are different for various deposits and climates conditions. Furthermore, the described 2.45-GHz M-CVD method is less energy-efficient than mining operations. It is undeniable that all lab-grown diamonds are more water-friendly than mined ones, although, according to ALROSA reports, there is a positive dynamic in mining toward reducing water intake per carat.

We would like to thank Vladimir Blank, Mikhail Glyavin, Fedor Jelezko, Roman Khmelnitckii, Oleg Kulagin, Nikolay Suetin, and Anatoly Vikharev, who have shifted our paradigm regarding plasma-based technologies. We would also like to express our sincere gratitude to Konstantin Mashinsky and his team for the invaluable support of our experimental research. Lastly, our research did not receive any specific grant from funding agencies in the public, commercial, or not-for-profit sectors.

The authors declare that they have no known competing financial interests or personal relationships that could appear to have influenced the work reported in this paper. 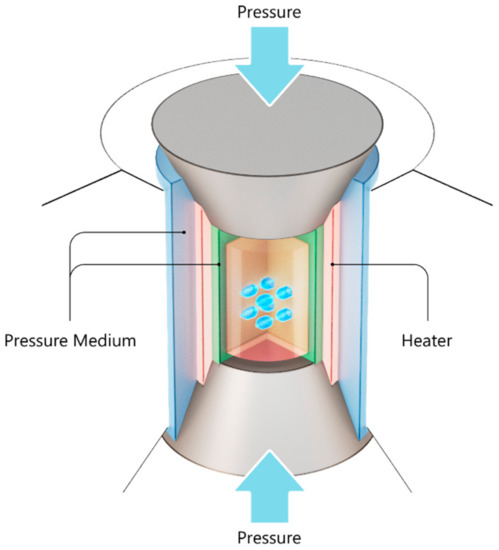 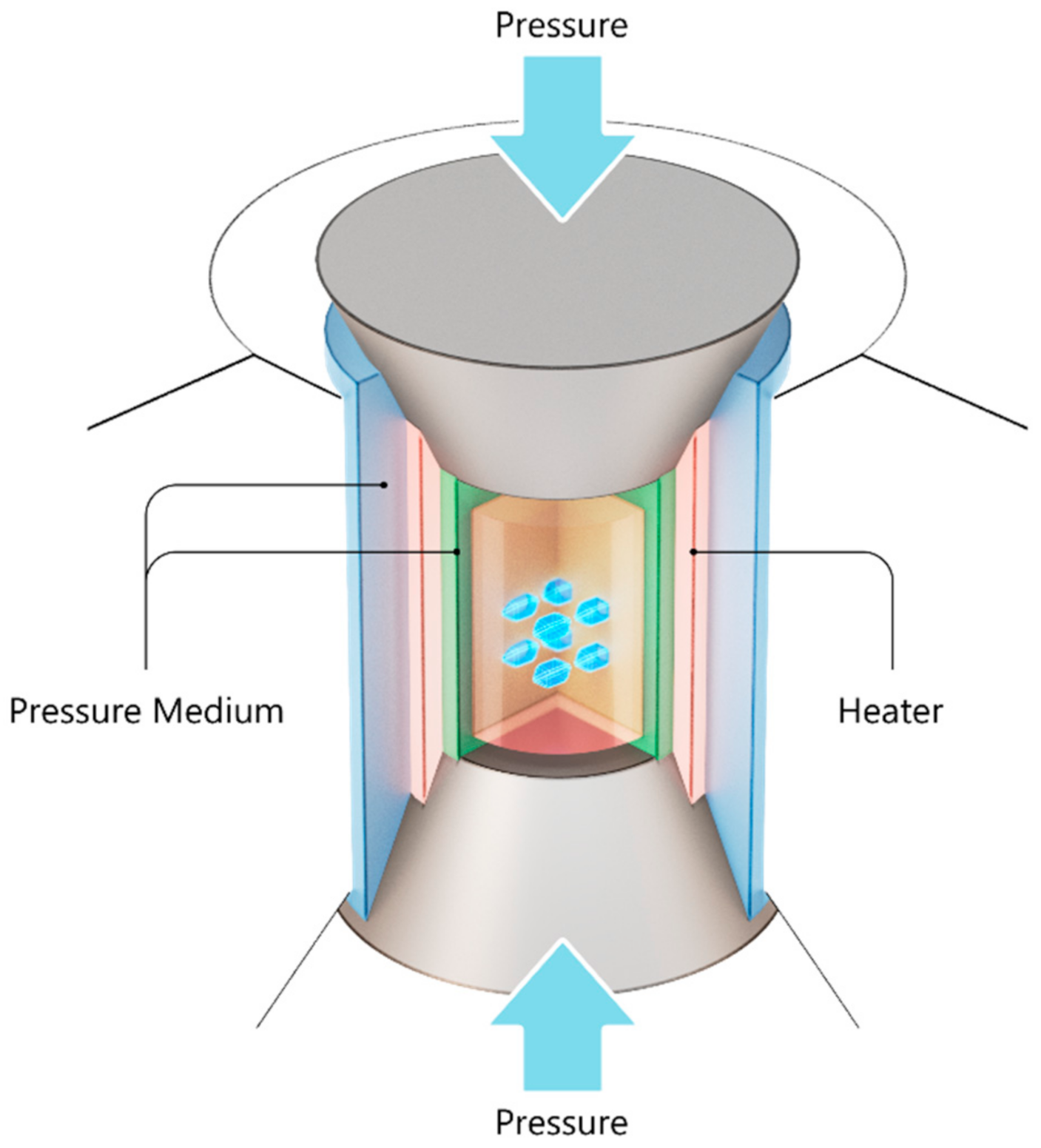