The constant growth of electricity demand, depleting resources of fossil fuels, and the advancing globalisation and climate change make renewable energy the fastest developing branch of energy supply. The share of biogas, photovoltaic, hydro, and wind power plants in the total balance of energy generators is continuously increasing. Wind farms in particular have become very popular. Modular design (unrestricted number of power turbines), no by-products in the process of power generation, relatively low cost of investment and operational costs when compared to conventional power plants, as well as environmental aspects, make wind power very attractive. Levelized cost of energy (LCOE) is based on the estimation of the average total cost of construction and operation of a given system over its entire operating time. It is estimated that in 2025, depending on a given region of the world, offshore wind farms may have LCOE lower by 50% than a conventional coal-fired power station and several percent lower than in the case of nuclear power plants [1]. Compared to the latter, the flexibility of wind farms is of particular importance. By adjusting the angle of the rotor blades and with the availability of stopping a single turbine in a few minutes, the amount of generated power can be easily controlled, which is impossible to achieve for nuclear power plants or even for traditional coal power plants in such a short time.
To reach out for new natural resources, such as wind, wind farms are now more often being installed at sea, at a distance of up to one hundred kilometres from the coast. In such places, winds blow with much greater force and more frequently than on land. In offshore areas, limitations regarding spatial development and environmental impact are much smaller than on land, which makes it possible to construct and install bigger wind turbines. Over the last ten years, the power and size of wind turbines have more than doubled. Currently, turbines capable of generating more than 12 MW are being tested [2]. Additionally, growing demand for floating wind turbines can be observed. The first farm of this type was commissioned off the coast of Scotland in 2017. The Hywind wind farm has paved the way for the next generation of wind farms that reach further into the sea [3]. Not so long ago, inter-array cables, in other words, cables connecting individual wind turbines, used to operate in the 33 kV AC voltage system, whereas currently it is already 66 kV AC with discussions now taking place regarding the possibility of transforming it to 132 kV or lower frequencies of less than 50 Hz [4,5,6]. It is worth mentioning that it is not only in wind where the potential of renewables in offshore and oceanic areas lies, but also water tides, sea currents, and differences in water temperatures at different depths (ocean thermal energy conversion). As the power of individual generators grows, so does the amount of transmitted energy. Intensive development of offshore power distribution also determines the necessity to make use of new, reliable, and innovative solutions for transmitting power from the turbines and offshore power plants to the land. Submarine cables are evolving in parallel with the development of offshore systems and power generators, and the constant attempts to improve their reliability and extreme operating conditions result in the necessity to use increasingly advanced materials with strictly defined functions that are dedicated to specific applications. In this article, the focus is placed on one of the key components of the subsea cables’ constructions, which is the radial water barrier. It also discusses currently used solutions, trends, and directions in the development of new innovative materials for this application.

2. Types and Construction of Submarine Cables

(a)
Inter-array: cables designed for direct connection of wind turbines with each other and transmission of power from the turbines to the transformer station located on the offshore wind farm. Inter-array cables currently used are designed for voltages of 66 kV and 33 kV with the latter becoming less common [7].
(b)
Export: cables for transmitting electricity from the offshore wind farm to the land, in other words, cables connecting transformer stations at sea with the connecting power station on land. Voltage level for export cables ranges from 132 kV, through the most popular 220 kV, up to 320 kV [8].
(c)
Interconnector: subsea cables for transmitting large amounts of electricity over long distances between various states and islands. These are mainly high voltage and extra high voltage cables, ranging from 220 to 800 kV [9].
Depending on the technology of transmission, subsea cables can be divided into:
(d)
AC cables (alternating current).
(e)
DC cables (direct current).

5. Directions of Development in the Field of Water Barrier in Submarine Cables

6. Thermoplastic Polyurethane (TPU) as a Potential Material for Applications in New Designs of Submarine Cables

The permeability of block copolymers has already been a focus of numerous researches since the 1960s. These studies revealed many interesting properties of these materials and opened a new perspective on the phenomenon of diffusion and permeability. Block copolymers represent a very wide range of materials with a great variety of properties. One of the best examples of block copolymers is thermoplastic polyurethanes (TPU), which can be synthesized from several types of substrates (e.g., polyether, polyester, or polycarbonate oligomers, aromatic or aliphatic diisocyanates, and chain extenders, etc.). Polymers obtained this way can have very different properties. Block copolymers consist of hard and soft segments. Depending on the kind of segments and their functionalities, these materials can also have various properties. High strength, resistance to hydrolysis, resilience, and the ability to maintain good properties at low temperatures, are only several of many properties that can be obtained by thermoplastic polyurethane. Thanks to these properties, TPU is now used in various types of measurement cables, supply cords, power cables, control wires used in opencast mining, and transmission cords for radio and television. As far as the water sorption property is concerned, it is believed that soft TPU chains play an important role in this regard. Hard blocks do not have such an influence on the water absorption properties of TPU. The chemical structure, polarity, and molecular weight of hard blocks, on the other hand, are very important concerning resistance to strong solvents. Hard blocks are usually impermeable to small molecules and can act as simple crosslinks, which reduce general permeability. Permeability of block copolymers in TPU depends on various factors, such as chemical structure, polarity, the weight ratio between soft and hard blocks, phase separation, and material morphology [36]. Block copolymers are materials that could be widely used in new designs of submarine cables. Research regarding their water permeability, absorption, and diffusion may lead to the introduction of new and innovative designs of submarine cables. The possibility to modify and select an appropriate combination of materials together with the development of optimal designs could be a solution for more demanding applications, such as submarine dynamic cables.

The submarine cables manufacturing industry is growing very rapidly. Solutions used so far, usually adapted from designs of land cables, do not fulfil the new, more demanding requirements. The phenomenon of water ingress into insulation and its absorption are basic factors determining the service life of submarine cables. The radial water barrier is the only effective component of cable design that may guarantee the required minimum 30-year longevity of submarine cables. However, finding the appropriate solution for an effective radial water barrier that could be used in dynamic cables is very difficult. Required resistance to constant bending results in growing interest and development of technology with the use of longitudinally welded and corrugated copper or aluminium tape. There are also studies conducted on the possibility of using multilayer polymer materials consisting of a layer with low permeability and another one with a high rate of absorption. Great potential in this regard has been discovered in block copolymers. A new approach to designing submarine cables in connection with mathematical models used for the prediction of service life as well as studies on mechanisms of diffusion, absorption, and water penetration could revolutionise the submarine cable industry.

This research was funded by the Ministry of Education and Science within the 3rd edition of the “Implementation doctorate” program.

The data presented in this study are available on request from the corresponding author. The data are not publicly available due to the fact that these are data on the research work carried out in the project, which lasts until July 2021. Additionally, at the moment the selected data for this project is only kept in open repositories. 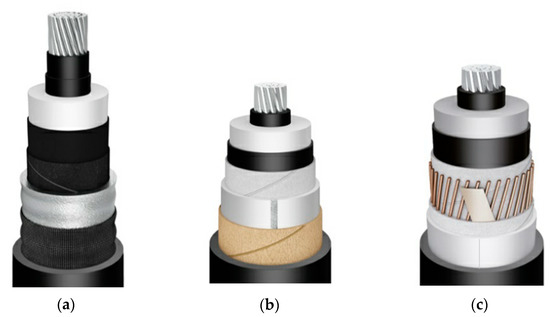