Household Sharing for Carbon and Energy Reductions: The Case of EU Countries
Previous Article in Journal

An Integrated Energy and Environmental Audit Process for Historic Buildings

European Cities in the Energy Transition: A Preliminary Analysis of 27 Cities

Nowadays, there is a wide scientific consensus about the unsustainability of the current energy system and at the same time, social awareness about climate change and the IPCC’s goals is increasing in Europe. Amongst the different pathways towards them, one alternative is the radical transition to a democratic low-carbon energy system where the local scale has a key leading role. Under this scope, this research is framed within the mPOWER project, financed by the European Commission’s H2020 programme, which promotes collaboration among different European municipalities in order to boost the transition to a renewable-based participatory energy system. This paper presents the starting point of the mPOWER project, where the main energy features of 27 selected European municipalities are collected and analysed for the year 2016. An open public tender and selection process was carried out among European cities in order to choose the candidates to participate in mPOWER project. A view of this situation will be taken by the mPOWER project as a diagnostic baseline for the following steps: a peer-to-peer knowledge-sharing process among these European municipalities, and subsequently, among a more extensive group. The first finding of the paper is that, even if those municipalities are trying to reduce their greenhouse gas emissions, they are highly dependent on fossil fuels, even in cases where renewable energies have significant presence. Second, their energy consumption is logarithmically related to the human development index and gross domestic product but not to the size of the cities and their climate characteristics. Finally, despite the work that these cities are making towards energy transition in general and within the mPOWER project in particular, the paper shows a high difficulty mapping their energy systems. The lack of accurate and unified data by the municipalities is a sign of disempowerment at a local and public level in the energy sphere and makes difficult any strategy to advance towards a bottom-up energy transition. Among other goals, the mPOWER project aims to reveal these kinds of difficulties and help local authorities in managing their transition paths. View Full-Text
Keywords: energy transition; sustainable cities; transition roadmaps; renewable energies; policymaking; energy democracy; energy mapping energy transition; sustainable cities; transition roadmaps; renewable energies; policymaking; energy democracy; energy mapping
►▼ Show Figures 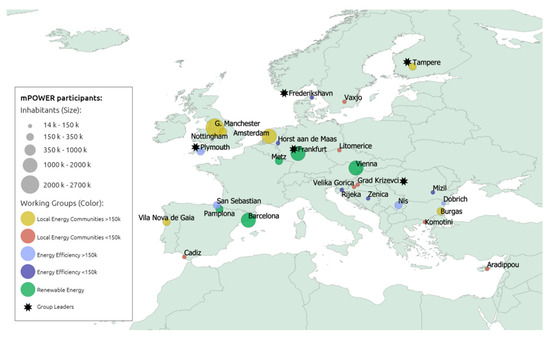