In power systems, flow allocation (FA) methods enable to allocate the usage and costs of the transmission grid to each single market participant. Based on predefined assumptions, the power flow is split into isolated generator-specific or producer-specific sub-flows. Two prominent FA methods, Marginal Participation (MP) and Equivalent Bilateral Exchanges (EBEs), build upon the linearized power flow and thus on the Power Transfer Distribution Factors (PTDFs). Despite their intuitive and computationally efficient concepts, they are restricted to networks with passive transmission elements only. As soon as a significant number of controllable transmission elements, such as high-voltage direct current (HVDC) lines, operate in the system, they lose their applicability. This work reformulates the two methods in terms of Virtual Injection Patterns (VIPs), which allows one to efficiently introduce a shift parameter q to tune contributions of net sources and net sinks in the network. In this work, major properties and differences in the methods are pointed out, and it is shown how the MP and EBE algorithms can be applied to generic meshed AC-DC electricity grids: by introducing a pseudo-impedance , which reflects the operational state of controllable elements and allows one to extend the PTDF matrix under the assumption of knowing the current flow in the system. Basic properties from graph theory are used to solve for the pseudo-impedance in dependence of the position within the network. This directly enables, e.g., HVDC lines to be considered in the MP and EBE algorithms. The extended methods are applied to a low-carbon European network model (PyPSA-EUR) with a spatial resolution of 181 nodes and an 18% transmission expansion compared to today’s total transmission capacity volume. The allocations of MP and EBE show that countries with high wind potentials profit most from the transmission grid expansion. Based on the average usage of transmission system expansion, a method of distributing operational and capital expenditures is proposed. In addition, it is shown how injections from renewable resources strongly drive country-to-country allocations and thus cross-border electricity flows. View Full-Text
Keywords: power system analysis; flow allocation; transmission cost allocation; European electricity grid power system analysis; flow allocation; transmission cost allocation; European electricity grid
►▼ Show Figures 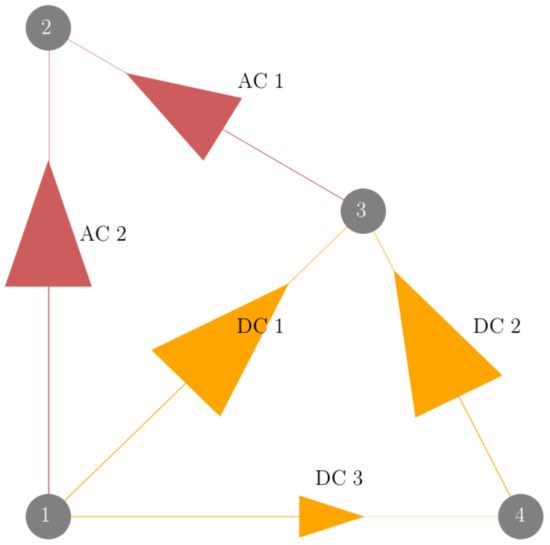