:
Geothermal heat exchangers (GHEs) represent a buried pipe system, which can be utilised to harness renewable thermal energy stored in the ground to improve the efficiency of heating and cooling systems. Two basic arrangements of GHEs have been widely used: vertical and horizontal. Vertical GHEs generally have a better performance in comparison with the horizontal arrangement, and these systems are particularly suitable for confined spaces. Nevertheless, the main technical challenge associated with GHEs, for either the vertical or the horizontal arrangement, is the performance deterioration associated with an increase in the operation times during summer or winter seasons. In this paper, a combined horizontal-vertical GHE arrangement is proposed to address the current challenges. The combined GHE arrangement can be operated in five different modes, corresponding to different thermal loading conditions. These five operation modes of the combined GHE are analysed based on the transient finite difference models previously developed for the horizontal and vertical arrangements. The simulation results reveal that for the single operation mode (horizontal or vertical only), the vertical GHE performs better than the horizontal GHE due to relatively stable ground temperature deep down. While, for the combined operation mode, the series operations (horizontal to vertical or vertical to horizontal) of the GHE are superior to the split mode. It is found that the effect of the fluid mass flow rate ratio is trivial on the heat dissipation of the split mode GHE. The highest heat transfer rate in the split flow operational mode is rendered by the ratio of the mass flow rate of 40% horizontal and 60% vertical. In addition, the climate condition has more effect on GHE’s performance and the increase of the fluid flow rate it can enhance the amount of energy released by the GHE.
Keywords:
geothermal heat exchangers; combined arrangement; operation analysis 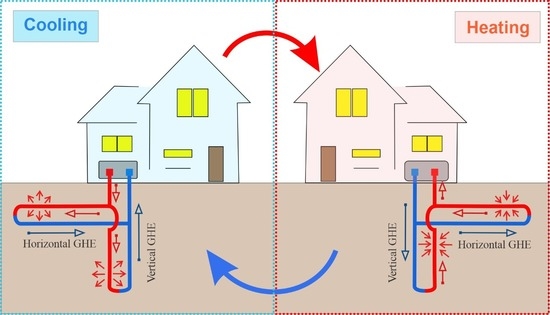 The physical model is described first including a number of simplifications, which are usually needed for quantitative analysis of complex systems or phenomena. A horizontal GHE, as shown in Figure 1a, represents a multi-U-shaped pipe buried in a trench at a specific depth h close to the ground surface. A horizontal GHE has a total length L, diameter d, wall thickness t, and pipe spacing . The heat transfer process at the horizontal GHE occurs when the fluid at a temperature Tfi enters the GHE and exchanges the heat energy with the pipe’s inner surface by convection. The heat then conducts through the pipe wall to the surrounding soil. The ground exchanges the heat at the ground surface with the atmosphere through diverse heat transfer mechanisms including reflection, convection, radiation, and evaporation. A vertical GHE, as shown in Figure 1b, could be modelled as a single U-shaped pipe, which is buried inside a borehole having a diameter Db and depth z. The pipe is described by diameter d, length L, thickness t, and shank spacing . The borehole is usually filled with a material, which has a relatively higher thermal conductivity than the surrounding soil, in order to enhance the GHE’s thermal performance. The borehole could be confined by different types of soil/rock layers that have different thermal conductivities. The heat transfer at GHE occurs when the fluid is operating at a temperature of Tfi and the mass flow rate m is circulated through a U-shaped pipe, exchanges its heat with the pipe’s wall by convection. The heat then flows through the pipe’s wall, grout, and surrounding soil by conduction sequentially. The convection occurs when the soil surface exchanges the heat with the atmosphere. As mentioned above, a vertical GHE is appropriate for installation in areas with limited land access. It may benefit from the relatively stable ground temperature at the deeper ground depth, and it leads to an improvement in performance. However, this performance decreases with the increase in the operation time, and it may take a season to recover fully. The poor soil conductivity and relatively deep depth of burring are the main reasons for the slow recovery of the soil temperature.
To take advantage of different arrangements and negate their disadvantages, a combined, structured, horizontal–vertical GHE was proposed, see Figure 2. This figure represents a schematic diagram of the proposed combined horizontal–vertical GHE, coupled with a heat pump. The hybrid horizontal vertical GHE can be operated in five different modes through the adjustment of the valves, namely (1) the horizontal GHE only, (2) the vertical GHE only, (3) the horizontal to the vertical GHE, (4) the vertical to the horizontal GHE, and (5) both the horizontal and the vertical GHEs concurrently, by splitting the fluid flow.

The performance of the combined GHE was studied based on the previously developed mathematical models for the horizontal [21] and vertical [22] GHE, respectively. The key equations in these models are briefly summarised below.

2.2.1. Governing Equation of the Soil

2.2.2. Governing Equation of the Temperature Exchange in the Grout for the Vertical GHE

The governing equation of the grout is given by a similar equation to the one above:

2.2.3. Governing Equation of the Pipe

The energy balance equation for the pipe is
The area of the pipe for the vertical GHE was determined based on an equivalent pipe diameter, which is given later by Equation (8).

2.2.4. Governing Equation of the Fluid

2.2.5. The Initial and Boundary Conditions

The system of differential Equations (1), (2), and (4)–(6) were solved by using an explicit finite difference scheme, which provided the accurate solution for the temperature distribution in the soil, grout, pipe, and fluid. As an example, Figure 4 shows the computational domain of the vertical GHE. The working fluid exchanges the heat energy with the pipe’s surface, which then flows through the pipe wall in a 1D way. The heat is then transferred through the grout and surrounding soil in a 2D manner. Two different boundary conditions are applied at the boundary of the soil domain. The convection heat transfer is considered at the ground surface, while the adiabatic conditions are applied at the bottom and lateral edges of soil domain boundaries.
To achieve the stability of the explicit numerical calculations, the time step must be within the Courant–Friedrichs–Lewy stability range [26], which is given by:
Total of heat exchange by the GHE was calculated in accordance with the following equation:
For the split flow mode, the final temperature of mixed fluid from both the horizontal and the vertical GHE was found as:
The described GHE’s models were validated against the experimental data [21,22,23] and will be used to simulate the performance of a combined GHE.

This section shows the simulation outcomes of the GHE subjected to five operational modes, as described above. The analysis and discussion on continuous operation, intermittent operation, split flow operation, climate condition, and variations of the fluid mass flow rate will be discussed in the following section.

The performance of the GHE installed in a temperate climate corresponding to Adelaide was compared with that installed in a subtropical climate, such as near Brisbane. Figure 14 summarises the performance of the GHE, which was installed in two different regions, with different climate conditions. It was found that during 72 h (3 days: 10–12 January) of the continuous operation, the GHE installed in Adelaide’s temperate climate could release 34.3% and 26.9% more energy compared with that installed in Brisbane, for the horizontal and vertical mode, respectively. While for the combined modes including horizontal to vertical, vertical to horizontal, and split flow were 31.7%, 31.8%, and 31% higher, respectively. It is observed that operating the vertical GHE only, in the temperate climate, Adelaide, could release an amount of energy that was almost the same as that released by the combined operation mode, in the subtropical climate. This tendency occurred because the climate condition influenced the initial soil temperature in both regions. The initial soil temperature in Adelaide was lower than that in Brisbane, as seen in Figure 5. In addition, the difference in soil types in both locations contributed to the heat transfer capacity of the GHE. As a result, the GHE installed in a temperate climate, Adelaide, produced a lower outlet fluid temperature as demonstrated in Figure 15.

In this paper, a combined GHE was proposed and its performance in five operational modes was analysed by using the validated models previously developed for horizontal and vertical arrangements of GHEs. The main conclusions, which followed from the calculations, are summarised as follows:

Conceptualization, methodology, and results and were initiated and wrote by S.E.S., E.H. and A.K.; S.E.S. contributed to the experiment and writing—original draft preparation; Writing—review and editing, T.M.I.R., R.T.; Supervision by E.H. and A.K. All authors have read and agreed to the published version of the manuscript.

The authors graciously acknowledge the support provided by the School of Mechanical Engineering, the University of Adelaide. 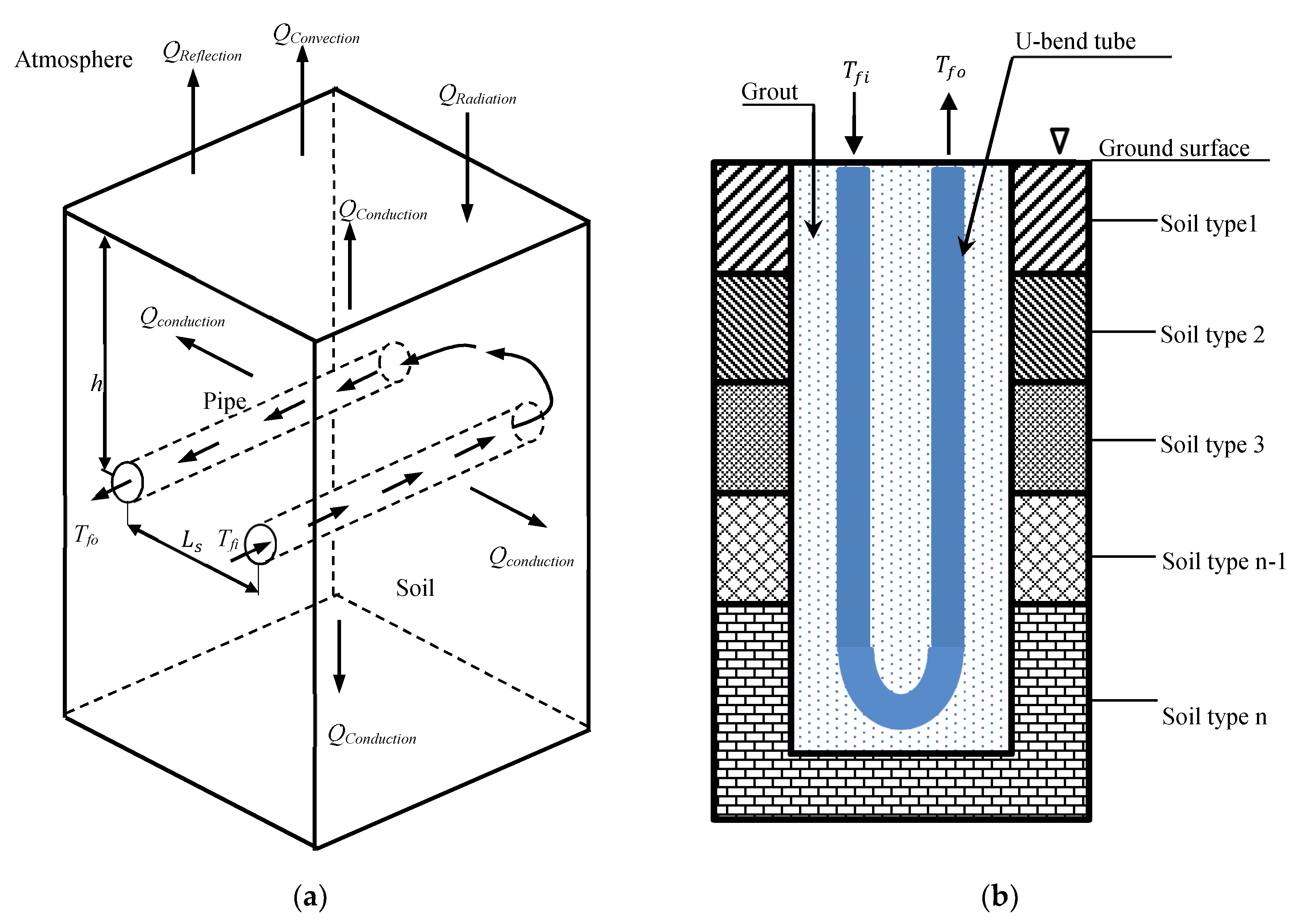 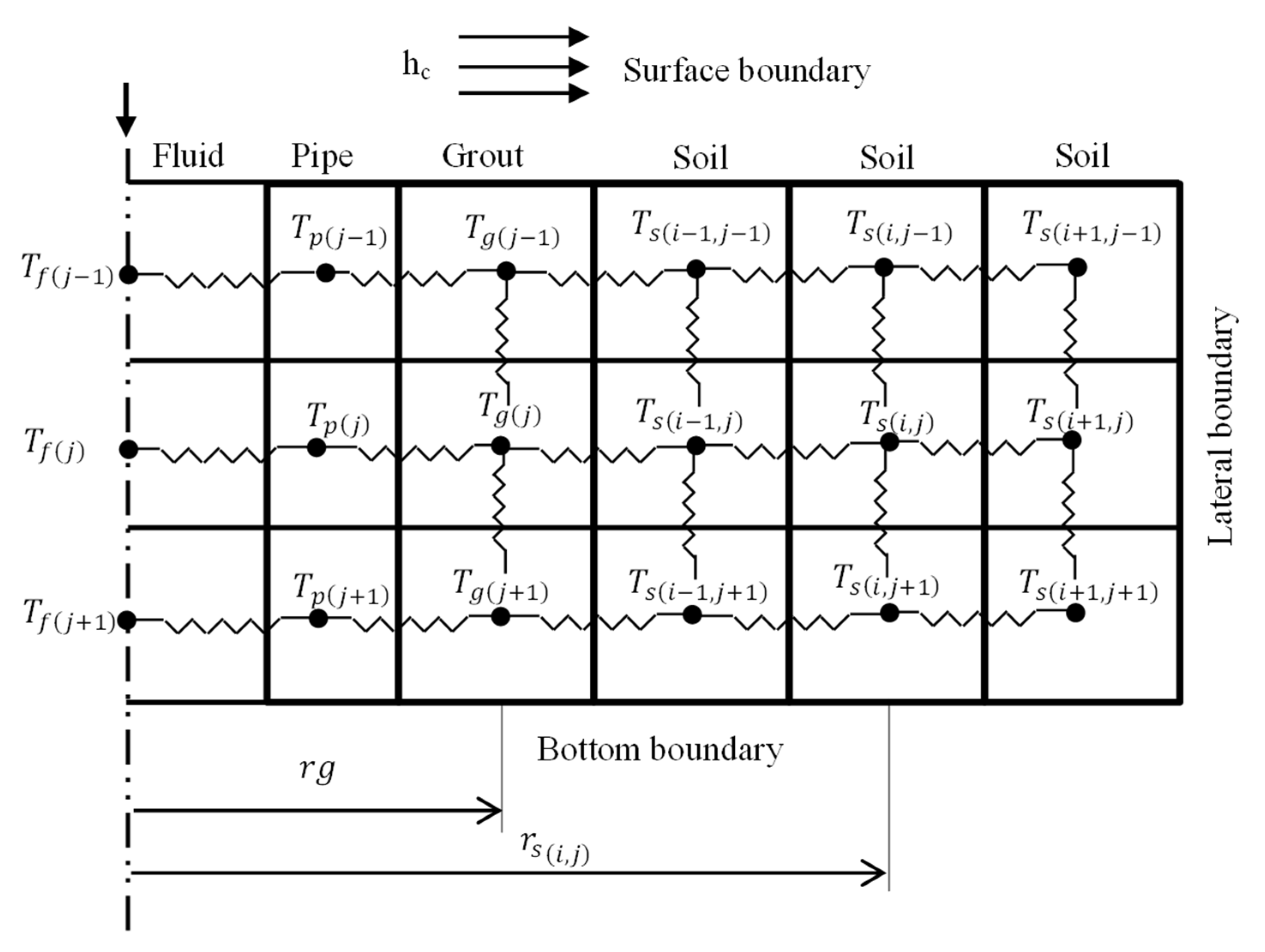 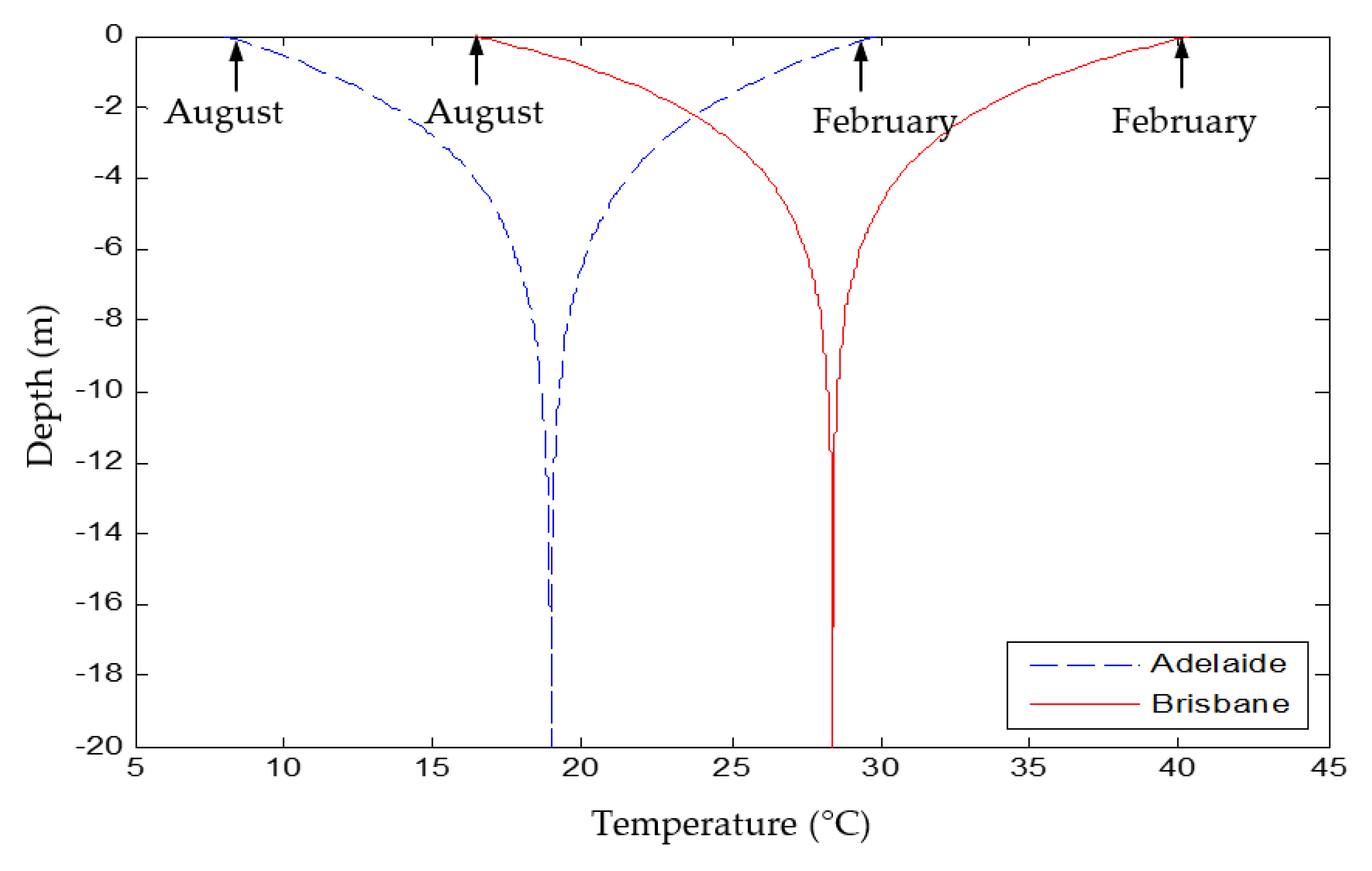 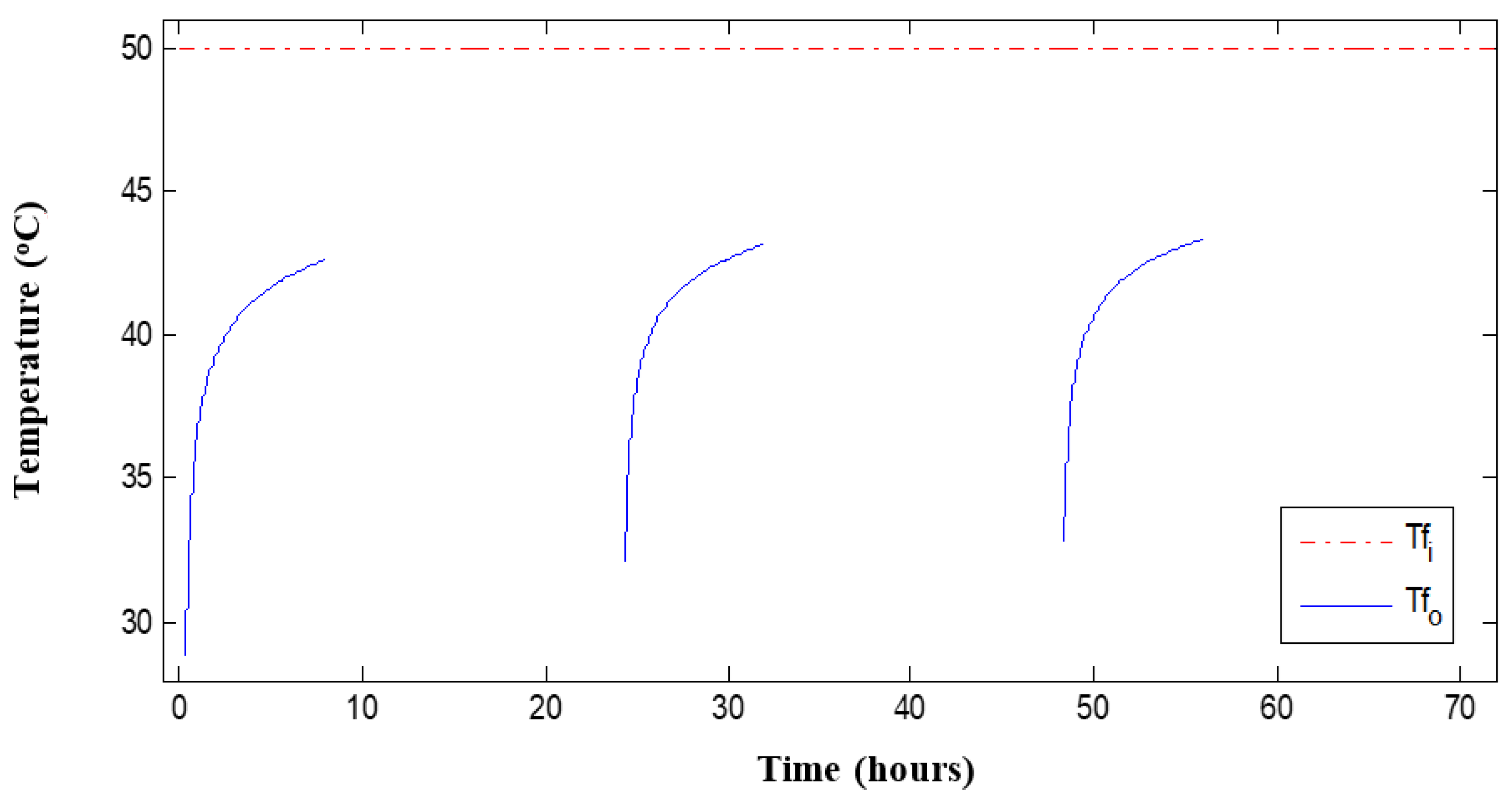