A Data-Driven Approach to Extend Failure Analysis: A Framework Development and a Case Study on a Hydroelectric Power Plant

In this paper, we have analysed the level of advancement in circular economy (CE) in the EU-28 countries. First, we used a synthetic measure to examine CE advancement in EU countries in each of the Eurostat CE distinguished areas, i.e., production and consumption, waste management, secondary raw materials, and competitiveness and innovation. For the empirical analysis, we applied 17 Eurostat indicators to the CE areas. To find the synthetic measure in 2010, 2012, 2014 and 2016, we used multidimensional comparative analysis, i.e., a zero unitarisation method. Second, based on the synthetic measures of the CE areas, we created a general synthetic measure of the CE advancement of the EU-28 countries as well as the countries’ rankings. Third, we classified the countries into groups according to their level of advancement in CE, i.e., high level, medium–high level, medium–low level and low level groups. Finally, we applied a similarity measure to evaluate the correlation between obtained rankings in two most extreme moments in the period of analysis (2010, 2016). Our analysis covers all EU member states, as well as “old” and “new” EU countries separately. Our results confirm that highly developed Benelux countries, i.e., Luxembourg, the Netherlands and Belgium, have the highest CE advancement level. Malta, Cyprus, Estonia and Greece are the least advanced in CE practice. Apart from that, on average, there is some progress in CE implementation, significant disproportions between the EU countries were observed, especially among the “new” member states. View Full-Text
Keywords: circular economy; sustainable development; EU countries; ranking; classification circular economy; sustainable development; EU countries; ranking; classification
►▼ Show Figures 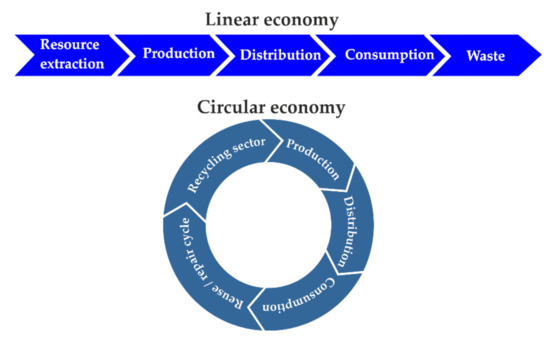