Local driving cycles (LDCs) capture local traffic characteristics, while standard driving cycles (SDCs) compare vehicles in distinct regions. There is a plethora of LDCs, raising the question as to how distinct they are. To quantify it, we first organized a collection of 77 LDCs. From the speed—time images, it was possible to extract numerical vectors of 40 cycles in a standardized way. Comparing the LDCs developed for cars, we found that their parameters fluctuate significantly: the average speed varies from 14.7 to 44.7 km/h, and the fuel economy varies from 10.8 to 20.5 km/L. Comparing the LDCs with FTP-75 cycle, the difference in speed is 7 km/h, and in fuel economy is 1.5 km/L. For WLTC, the difference is 19.4 km/h and 3 km/L, respectively. Thus, given the deviations found between the analyzed LDCs, and between LDCs and SDCs, the numerical results reinforce the relevance of using LDCs for each region. View Full-Text
Keywords: fuel economy; characteristic parameters; driving cycles; energy consumption; average speed fuel economy; characteristic parameters; driving cycles; energy consumption; average speed
►▼ Show Figures 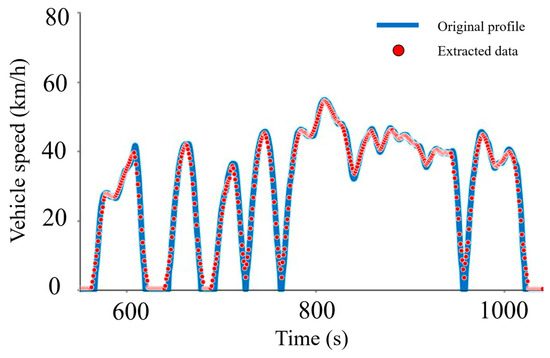