Vertical axis Darrieus turbine is the key component for ocean energy conversion and utilization. In the present work, the energy performance, flow pattern, and radial force for a vertical axis Darrieus turbine were investigated. The experimental measurements and numerical simulations were in good agreement, which validates the accuracy and reliability of the numerical method. The results showed that the power coefficient gradually increased with the increase of tip speed ratio λ, and the power coefficient had three peaks in a revolution of runner due to three blades. The complex vortex induced by the turbine revolution mainly includes the blade tip vortex and blade surface vortex, which are related to the turbine rotation and flow separation on blade surface. The vorticity transport equation was first introduced to analyze the mechanism and evolution of vortex in a vertical axis Darrieus turbine, and the results revealed that the relative vortex elongation term is the main driving force for the formation and development of the blade surface vortex. The radial force of the Darrieus turbine gradually increases with the increase in tip speed ratio, and it is symmetrical with three humps due to three blades.
Keywords: Darrieus; vertical axis turbine; energy performance; vortex; radial force Darrieus; vertical axis turbine; energy performance; vortex; radial force

In the present work, the vertical axis Darrieus turbine with a straight blade was tested in the French LEGI laboratory [23,24]. The turbine included three straight blades, which were NACA0018 hydrofoils with height H = 175 mm and diameter D = 175 mm, the blade chord length was c = 32 mm, and the shaft diameter was 22 mm. The computational domain of the turbine model are shown in Figure 1. The computation domain of turbine consists of the fixed and rotating domains. The water tunnel in the LEGI laboratory was set at a length of 1000 mm, width of 700 mm, and height of 250 mm. The turbine was located downstream 350 mm from the tunnel inlet and symmetrical to sidewalls.

In the vertical axis turbine, the operation condition is mainly expressed by tip speed ratio λ, which can be expressed as: where ω is the turbine rotational rate and r denotes the turbine radius.
The power coefficients Cp to evaluate the turbine energy characteristics is defined as follows: where P is the output power of turbine; ρ is the water density; and S is the turbine frontal area. The blade attack angle α decreases with the increase of λ, and it can be defined as: where θ is the blade phase angle.

In the present work, CFX 17.0 was employed for the numerical simulation of the turbine. The Unsteady Reynolds-averaged Navier-Stokes (URANS)-based k-ω shear stress transport turbulence (SST) model was used to solve the second-order difference calculation based on the finite element finite volume method. It has the advantages of fast solution speed, high accuracy, and strong convergence. Therefore, it is suitable for the numerical simulation of flow field in rotating machinery.
For the discrete processing of pressure gradient terms, the second-order upwind style was adopted to ensure its simulation accuracy. The transient rotor-stator model was utilized to simulate rotation at each time step. The rotation interface model was set as a general grid interface (GGI), which connects the fixed domain and rotation domain.
The boundary conditions were set according to the experimental results in the LEGI laboratory. The inlet velocity was set as 2.3 m/s, and the outlet pressure was set as 1 atm, and the wall was set as a no slip wall condition.

In the present work, four sets of grids were used to test the mesh number independence. The results under different grid numbers are shown in Figure 2. When the number of grids reached 8.01 million, the difference in energy capture coefficient Cp for the maximum two cases was below 0.04%. Therefore, the mesh with 8.01 million elements was chosen in the following calculation.

In the ocean, the complex flow conditions greatly influence the efficiency and stability of Darrieus turbines, especially for the induced vortex. Figure 7 shows the typical vortex induced by the turbine, mainly including the blade tip vortex and blade surface vortex at Q-criterion of 130,000 [s−2]. The blade tip vortex is due to the turbine rotation, and the blade surface vortex is induced by the flow separation on the blade surface, which is closely related to the blade phase angle and begins to form at 150° in the upstream region.

Figure 8 shows the blade tip vortex under different λ at a phase angle of 0°. The vortex starts from the leading edge of the blade tip, and then develops along the blade hydrofoil to the trailing edge. As the tip speed ratio increases, the trailing edge length of the tip vortex gradually increases, which will influence the flow pattern of the downstream blade.
Figure 9 shows the development of the blade tip vortex in a runner revolution. The tip vortex develops, collapses, and shrinks in a runner revolution. It was found that the tip vorticity reached the maximum at 120°, and decreased with the further movement of the blade, and the tip vorticity began to break at 180°. Finally, when the blade moved to 210°, the tip vortex collapsed.
A plane at a 101% blade height was selected to analyze the distribution of the tip vorticity, as shown in Figure 10. As the turbine rotation speed increased, the vortex volume increased and its intensity also increased. When λ is greater than 1.5, the tip vortex at a phase angle of 90° will reach the downstream blade and influence the flow field in this region. When λ exceeds 2.0, the rolling vortex falls from the main vortex and moves to the axis, and further rotates as the axis when λ increases.

In order to further analyze the mechanism and evolution of vortex, the vorticity transport equation is introduced as follows [31,32,33]: where represents the relative vorticity; is the relative velocity; and denotes the kinematic viscosity.
The first item on the right is the relative vortex elongation term (RVS), which is related to the relative velocity gradient. It was shown that the velocity gradient of the flow field causes the expansion and contraction of the vortex line, which leads to the change in the magnitude and direction of the vorticity. Generally, stretching narrows the scroll and correspondingly increases the vorticity, while bending changes the direction of vorticity. The second term represents the relative vortex expansion term (RVD), related to the relative velocity divergence. It shows that the change in the volume of fluid micelles causes the change of vorticity, which is due to the increase or decrease of rotational inertia. Considering that the angular momentum of micelles is conserved in inviscid fluid with a conservative force field, the increase or decrease of rotational inertia affects the change of vorticity. However, this term only changes the magnitude of vorticity, but does not change the direction. The third term represents the effect of Coriolis force (CORF), which is related to rotational motion. The fourth item is the baroclinic torque. The fifth term is the viscous diffusion term (VISD). As the current research is incompressible, the second and fourth items can be ignored.
In order to comprehensively obtain the flow pattern in the rear area of the blade, five planes: 55% Hb, 65% Hb, 75% Hb, 85% Hb, and 95% Hb were set at λ = 1.0. Figure 13a shows the dimensionless distribution of RVS, which had a strong correlation with the blade surface vortex, especially at 95% Hb. The value of RVS increased as the blade height increased because the stretching effect near the blade tip was obvious. The RVS is mainly concentrated at the blade suction side, which indicates that RVS is the main driving force for the formation and development of the blade surface vortex. Figure 13b shows the distribution of dimensionless CORF. In comparison to the vortex distribution in Figure 11, it is indicated that the CORF term mainly affects the direction of vortex motion. Coriolis force is inherent for the rotating machinery and can drive the blade surface vortex separate from the blade and develop downstream. Figure 13c shows the distribution of dimensionless VISD.
After the 120° phase angle shown in Figure 11, the distribution of the vorticity behind the blades was found to be gradually weakened as the height of the blades decreased.
Distributions of relative vortex stretching item, the effect of the Coriolis force item. and viscous diffusion item on different blade height at λ = 2.0 were also investigated. Figure 14a shows the dimensionless distribution of RVS, which is mainly consistent with the result of λ = 1.0, but the intensity of RVS was weaker than the result of λ = 1.0. Meanwhile, the blade tip vorticity at λ = 2.0 was stronger than that at λ = 1.0, as shown in Figure 8, which is related to the distribution of RVS at 95% blade height. Figure 14b shows the distribution of dimensionless CORF, and the CORF increases as λ increases. Figure 14c shows the distribution of dimensionless VISD, which decreases near the blade surface in comparison of that at λ = 1.0. This means that the vorticity distribution on the blade surface weakens and the vorticity distribution at the blade tip gradually increases.

In this paper, the energy performance, flow pattern, and radial force for a vertical axis Darrieus turbine were investigated. The main conclusions drawn are as follows: 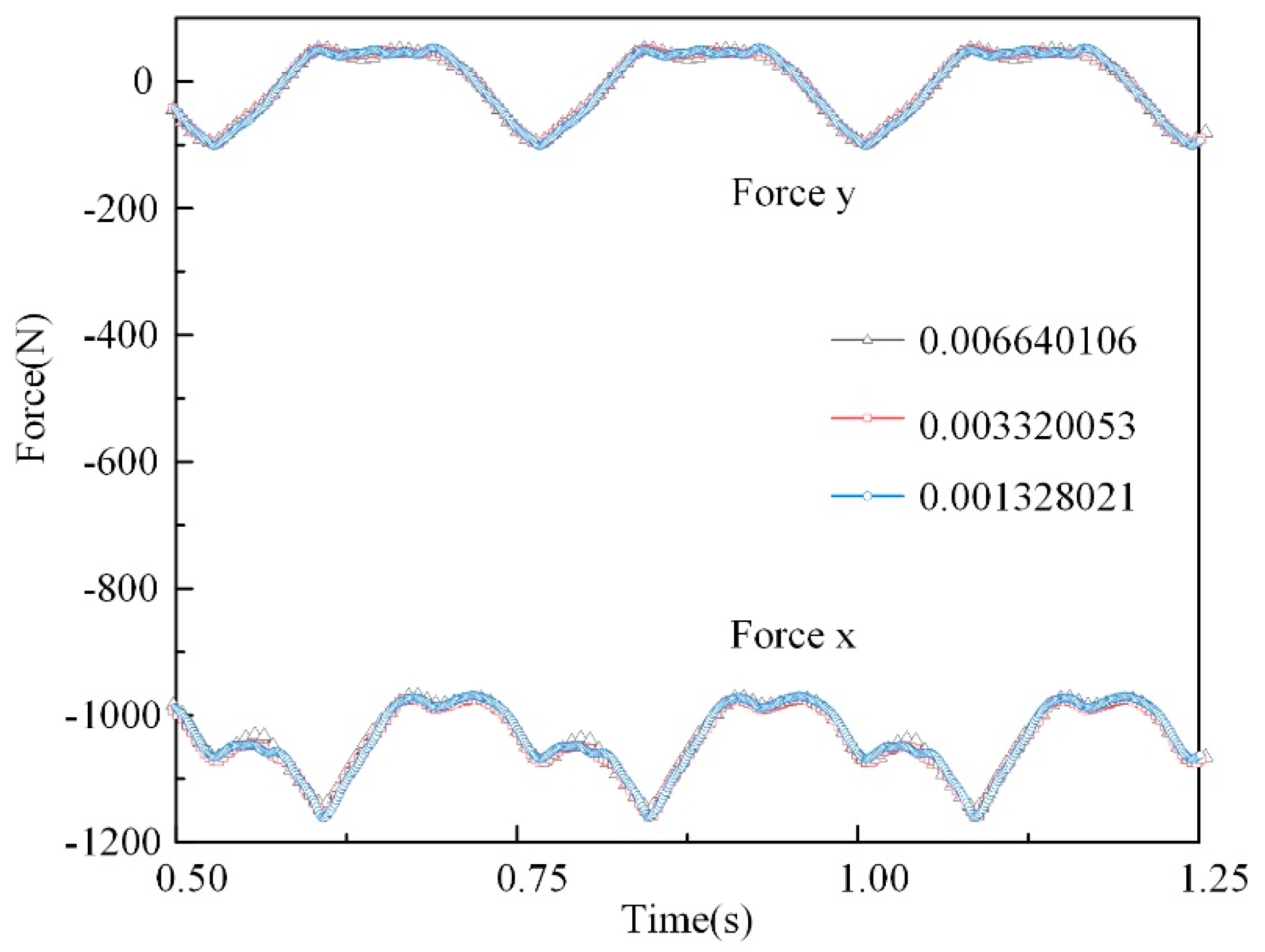 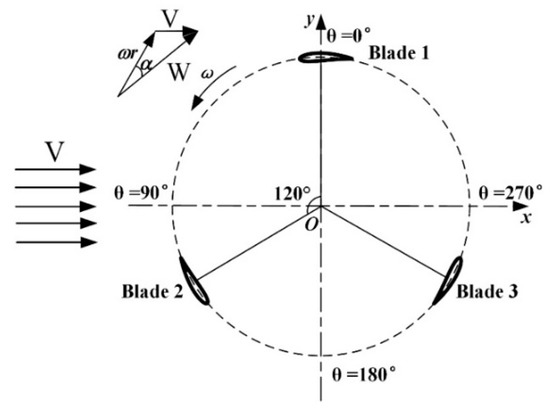 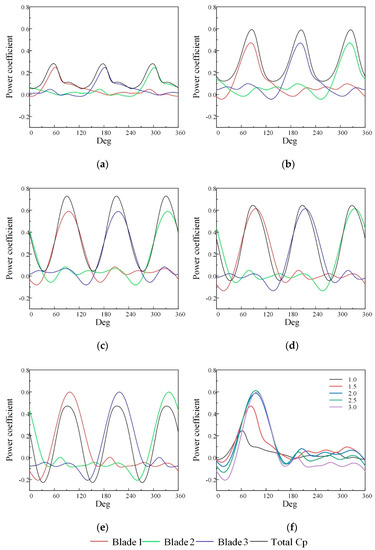 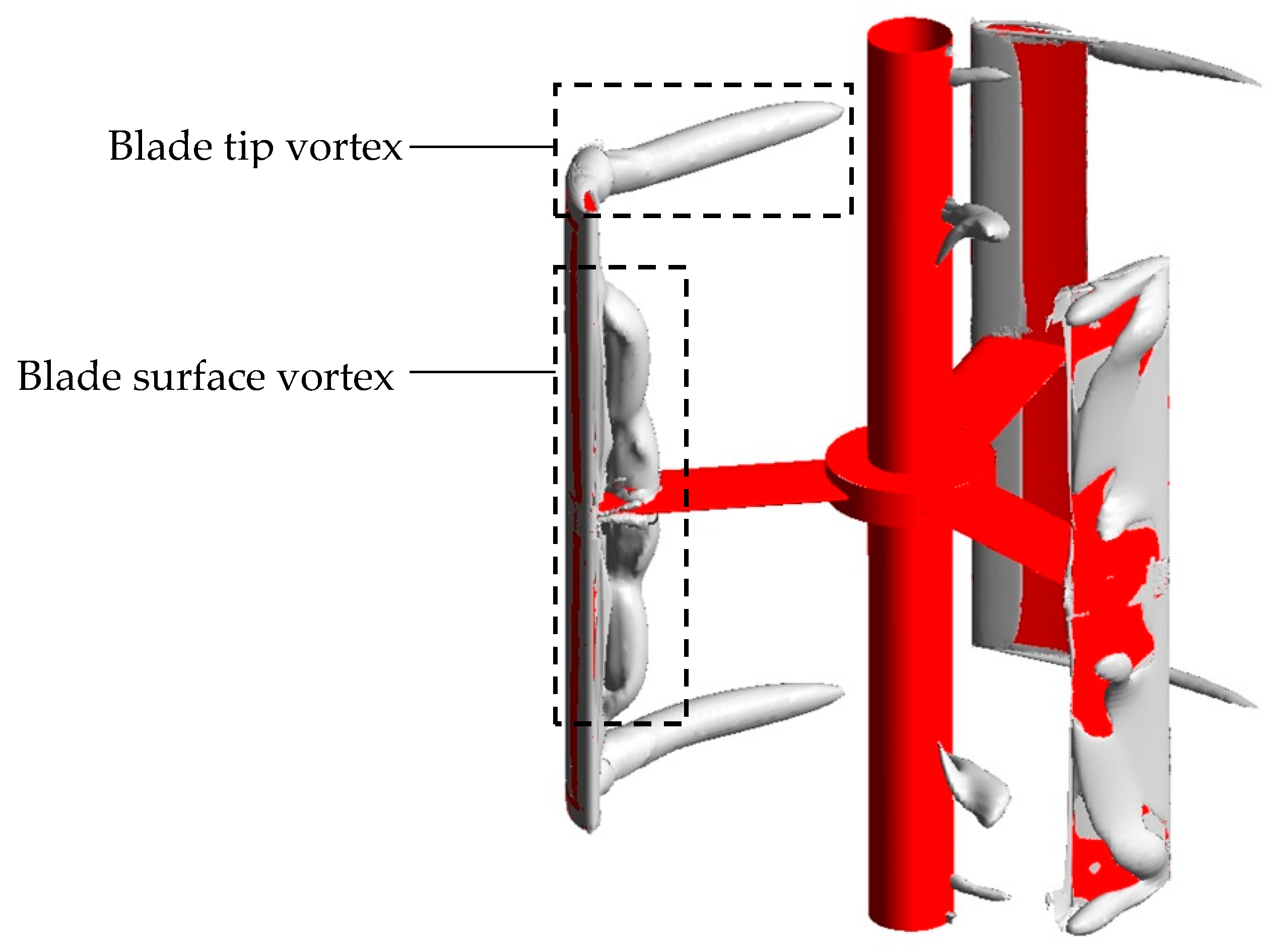 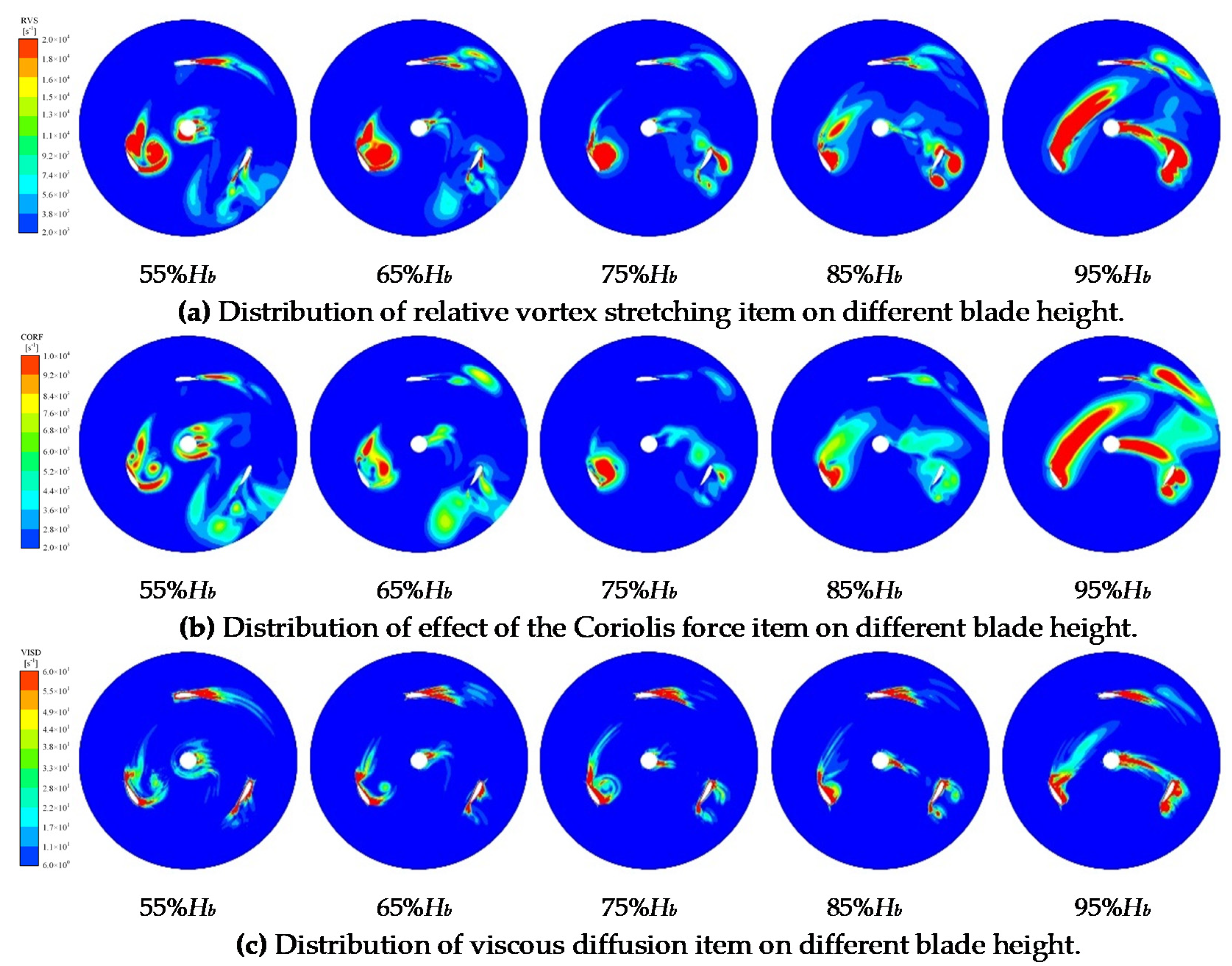