Vertical axis Darrieus turbine is the key component for ocean energy conversion and utilization. In the present work, the energy performance, flow pattern, and radial force for a vertical axis Darrieus turbine were investigated. The experimental measurements and numerical simulations were in good agreement, which validates the accuracy and reliability of the numerical method. The results showed that the power coefficient gradually increased with the increase of tip speed ratio λ, and the power coefficient had three peaks in a revolution of runner due to three blades. The complex vortex induced by the turbine revolution mainly includes the blade tip vortex and blade surface vortex, which are related to the turbine rotation and flow separation on blade surface. The vorticity transport equation was first introduced to analyze the mechanism and evolution of vortex in a vertical axis Darrieus turbine, and the results revealed that the relative vortex elongation term is the main driving force for the formation and development of the blade surface vortex. The radial force of the Darrieus turbine gradually increases with the increase in tip speed ratio, and it is symmetrical with three humps due to three blades. View Full-Text
Keywords: Darrieus; vertical axis turbine; energy performance; vortex; radial force Darrieus; vertical axis turbine; energy performance; vortex; radial force
►▼ Show Figures 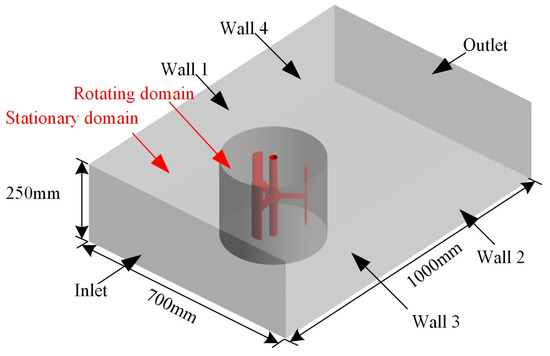