Microalgae (Spirulina) and primary sewage sludge are considerable feedstocks for future fuel-producing biorefinery. These feedstocks have either a high fuel production potential (algae) or a particularly high appearance as waste (sludge). Both feedstocks bring high loads of nutrients (P, N) that must be addressed in sound biorefinery concepts that primarily target specific hydrocarbons, such as liquid fuels. Hydrothermal liquefaction (HTL), which produces bio-crude oil that is ready for catalytic upgrading (e.g., for jet fuel), is a useful starting point for such an approach. As technology advances from small-scale batches to pilot-scale continuous operations, the aspect of nutrient recovery must be reconsidered. This research presents a full analysis of relevant nutrient flows between the product phases of HTL for the two aforementioned feedstocks on the basis of pilot-scale data. From a partial experimentally derived mass balance, initial strategies for recovering the most relevant nutrients (P, N) were developed and proofed in laboratory-scale. The experimental and theoretical data from the pilot and laboratory scales are combined to present the proof of concept and provide the first mass balances of an HTL-based biorefinery modular operation for producing fertilizer (struvite) as a value-added product. View Full-Text
Keywords: struvite; HTL; biorefinery; renewable fuel; HyFlexFuel struvite; HTL; biorefinery; renewable fuel; HyFlexFuel
►▼ Show Figures 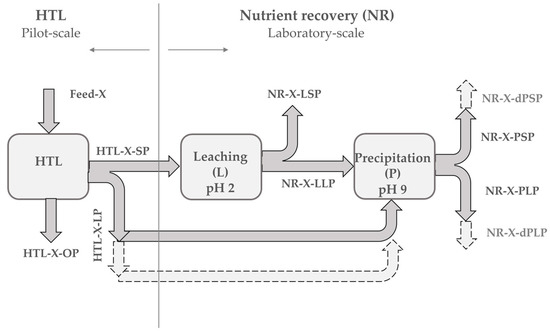