A promising heat storage technique is based on thermochemical materials (TCM). Such materials are often used in closed systems under vacuum conditions, which is demonstrated in several projects in the European H2020 R&D programs. In this type of systems, non-condensable gasses (NCG) may have a significant effect on the reactor performance. This paper considers the potential effects of NCG on vacuum TCM reactor performance in detail. Water is used as working material to study NCG. Both experiments and numerical simulations show that the effect of NCG cannot be neglected. A small amount of NCG in a vacuum setup will significantly reduce the evaporation/condensation rate. It will transform the transport process from convection-based into diffusion-based in case the pressure of NCG at the condenser surface is equal to the pressure difference between the evaporator/condenser. Designing a stable vacuum storage system, puts high demands on leak tightness of the reactors but also on avoiding NCG release originating from TCM and any used material in the reactor (like coatings and glue). Additional free volume in the reactor will help to reach the demands of stable performance over longer working periods but decreases system energy density, being a crucial KPI. With help of our model, the performance of a system can be determined. View Full-Text
Keywords: salt hydrates; heat storage; TCM; non-condensable gasses; vacuum reactor salt hydrates; heat storage; TCM; non-condensable gasses; vacuum reactor
►▼ Show Figures 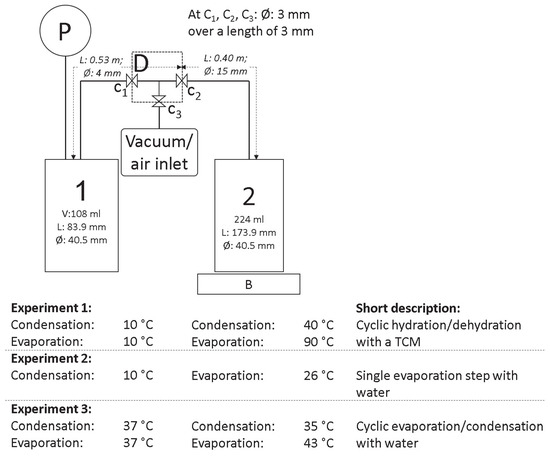