Falling film evaporators are used in applications where high heat transfer coefficients are required for low liquid load and temperature difference. One such application is the lithium bromide (LiBr)-based absorber and generator. The concentration of the aqueous LiBr solution changes within the absorber and generator because of evaporation and vapor absorption. This causes the thermophysical properties to differ and affects the film distribution, heat, and mass transfer mechanisms. For thermal performance improvement of LiBr-based falling film evaporators, in-depth analysis at the micro level is required for film distribution and hydrodynamics. In this work, a 2D numerical model was constructed using the commercial CFD software Ansys Fluent v18.0. The influence of the liquid load corresponding to droplet and jet mode, and the concentration, on film hydrodynamics was examined. It was found that the jet mode was more stable at a higher concentration of 0.65 with ±0.5% variation compared to lower concentrations. The recirculation was stronger at a low concentration of 0.45 and existed until the angular position (θ) = 10°, whereas at 0.65 concentration it diminished after θ = 5°. The improved heat transfer is expected at lower concentrations due to lower film thickness and thermal resistance, more recirculation, and a higher velocity field.
Keywords: falling film; film thickness; CFD; horizontal tube; lithium bromide; LiBr; transient analysis; VOF falling film; film thickness; CFD; horizontal tube; lithium bromide; LiBr; transient analysis; VOF

In order to characterize the film distribution, one 25.4-mm tube was selected with an impingement height hi of 5 mm, as shown in Figure 1. The domain was equipped with a 2-mm orifice at the top of the tube. The width of the domain was 33 mm; since the nature of the problem is symmetric, only half of the domain is selected for CFD calculations. The aqueous LiBr solution is in the liquid phase and water vapors are considered as the gaseous phase. Two LiBr concentrations are chosen as per the common working range, i.e., low concentration C = 0.45 and high concentration C = 0.65. The thermophysical properties of the liquid and gaseous phases were evaluated as per [32] at 30 °C (the lower working temperature of the absorber [33]), as shown in Table 1.

For numerical model simplification, it is assumed that the flow is laminar for all cases. There is no fluid spreading in the z-direction. The thermophysical properties are constant throughout the distribution. There is no heat and mass transfer (adiabatic condition). The flow is symmetric along the y-axis. There is no vapor flow, and the wall adhesion contact angle θw is 0° (purely hydrophilic) to ensure the complete wetting of the tube [34].

The mass and momentum balances can be found by continuity and Navier‒Stokes equations, as shown below: where V is the velocity, t is time, P is the pressure, τ is the tensor, and Fvol is the volumetric force.

In falling film evaporators, the liquid and gaseous phases are separated by distinct boundaries. Hirt and Nichols developed a multiphase model named the volume of fluid (VOF) model to accurately capture the liquid phase interface [35]. The VOF model has been widely implemented in many applications such as bubble dynamics, reactors, falling films, capillary flows, flashing, and splashing in tanks to numerically distinguish the liquid/gas interface [36,37,38,39,40]. They modified the continuity equation as in Equation (8) by introducing void fraction α to solve the mass balance for both phase separately.
The subscripts g and l represent gaseous and liquid phases, respectively. The density and viscosity are evaluated on the basis of the void fraction. where α is the void/volume fraction representing how much liquid is present in a liquid‒gas mixture. The liquid void fractions αg and αl are defined as follows:

For the boundary conditions, (a) a mass inlet for liquid entrance is selected at the top, (b) a velocity inlet with 0 m/s is provided for water vapors, (c) a wall is selected for a tube with a zero contact angle, (d) a pressure outlet is for the outlet at the bottom, and (e) a symmetric boundary condition is chosen for the rest, as shown in Figure 1. The mass flow inlet varied from 0.01 to 0.5 kg/(m·s), with 0.02 kg/(m·s) intervals for both C = 0.45 and 0.65 concentrations, corresponding to droplet, droplet-jet, and jet mode. The films Reynolds number Ref and flow modes for each case are listed in Table 2. The gravity is acting in the negative y-direction with a value of 9.81 m/s2.

The domain is meshed quadrilateral dominant elements, and fine boundary layers are provided along the y-axis and tube wall in order to accurately capture the film distribution, as shown in Figure 2. The minimum thickness of the boundary layer is 0.02 mm adjacent to the wall. The conservation of mass and momentum are discretized across each cell in a commercial CFD code, i.e., Ansys Fluent v18.0 (Ansys Inc., Canonsburg, [Pa], United States). A second-order upwind scheme is used for Equation (9), semi-implicit method for pressure linked equations (SIMPLE) algorithm is applied for pressure-velocity coupling and pressure staggering option (PRESTO) is employed for pressure approximation. For void fraction gradient, a piecewise linear interpolation method known as geo-reconstruct scheme is implemented. The gradients are evaluated at the center of cell using a Green‒Gauss cell-based approach. The deduced equations are solved for each cell in a first-order implicit routine for an unsteady solution.

To obtain better results with the least computational effort, a mesh dependency test was performed. Three different meshes with 21,800, 29,400, and 36,100 elements were chosen and solved for Γ1/2 = 0.01 kg/(m·s) and C = 0.65. Figure 3 shows the film thickness distribution when the film completely covers the tube surface, i.e., t = 2.79 s. As is evident from the film distribution, when the mesh size increased from 21,800 to 29,400 elements, the distribution changed. However, a further increase in the mesh size led to minimal deviation. Hence, to save computational time, a mesh with 29,400 elements was selected for the numerical calculations. In addition, a time step of 10 μs was selected after the time dependency test.

Figure 5 shows the volume fraction contours of the LiBr solution (blue region) with a liquid load of Γ1/2 = 0.01 kg/(m·s) and concentration of C = 0.65. At t = 0.4 s, the liquid falls freely with gravity as the driving force and is opposed by the surface tension, which attempts to form a droplet shape, as shown at t = 0.8 s. At t = 1.2 s, the liquid hits the top of the tube and starts spreading around the tube wall. The impact region is known as the stagnation point; as the liquid spreads it enters stagnation and then the developing region. At t = 1.6 s, the liquid continues to spread, forming a thin layer of LiBr solution. At this stage, the liquid film is in the developing region, as the velocity profiles within the film are not fully developed. From t = 2 s to 2.4 s, the tube surface is mostly covered by liquid film and the flow is fully developed. At t = 2.8 s, the tube is entirely covered with a thin layer of LiBr solution and the liquid starts gathering underneath the tube. The adhesion and surface tension forces hold the liquid at the bottom and prevent it from falling. The liquid keeps on gathering until the inertial force dominates and the liquid separates from the tube surface and falls freely.
Figure 6a,b shows the film thicknesses δins at an angular position ranging from 5° to 175° for different time instants under the operating conditions of Γ1/2 = 0.01 kg/(m·s) and C = 0.45/0.65. It is clear that the film thickness pattern is not fixed, but changes with respect to time. Therefore, for comparison and analysis, the time-averaged film thickness δ is considered in this work. The time-averaged film thickness profile is represented by the solid line in Figure 6a,b. The jet mode is usually considered steady with weak perturbations. Figure 7 displays the transient behavior of film thickness at θ = 90° for a liquid load corresponding to the jet mode with C = 0.45 and 0.65. For C = 0.45, the instantaneous film thickness varies over time after the tube is completely wet and becomes stable with an average thickness of 0.245 mm. However, there remain some fluctuations, with a maximum deviation of 14.1%. At C = 0.65, the density and viscosity are 24.8% and 384% higher than at C = 0.45. The dense, viscous fluid rapidly becomes stable, with very low fluctuations of +0.5%. The perturbations positively affect the heat and mass transfer, and are present for a low-density and viscous fluid such as C = 0.45.

The effect of liquid load on film thickness distribution is shown in Figure 8a,b. The film thickness decreases as the fluid moves from top to bottom, until it reaches to a minimum value, which is around θ = 90°. After that, the film thickness again begins to rise, sharply near the bottom of the tube, which is after θ = 150° due to the accumulation of liquid. As the liquid load is increased from 0.01 kg/(m·s) to 0.03 kg/(m·s), the film distribution shifts upwards for both C = 0.45 and C = 0.65. However, when the liquid load is raised from 0.03 kg/(m·s) to 0.05 kg/(m·s), the growth in film thickness is smaller than that of 0.01 kg/(m·s) to 0.03 kg/(m·s). This is because it follows the same trend as in Equation (7), which implies that the film thickness is directly proportional to the cubic root of liquid load, keeping the other parameters constant:
With the same liquid load value, the film thickness of C = 0.65 is higher than that of C = 0.45 because the density and viscosity vary with concentration. Figure 9a represents the time required for the tube surface to be completely covered by the liquid film. The higher film thickness for C = 0.65 with the same mass flux indicates a smaller fluid velocity field, which means a dense, viscous fluid needs more time for tube surface coverage. This indicates that the residence time for a higher concentration is more than that for a lower concentration, which means that more heat transfer is possible due to the higher residence time. On the other hand, the higher thickness results in increased thermal resistance, which is undesirable for heat transfer. At Γ1/2 = 0.01 kg/(m·s), the time needed for C = 0.65 and C = 0.45 is 2.79 s and 1.52 s, respectively. With the increase in liquid load, the fluid moves faster with a higher velocity field. Thus, the coverage time decreases to 0.88 s and 0.5 s for C = 0.65 and C = 0.45, respectively. The film thickness in the impingement and detachment zones, as shown in Figure 6a, is much greater than the in-between zone, i.e., θ = 20°–160°. Therefore, the average film thickness δavg is evaluated for θ = 20–160° and is presented in Figure 9b, with liquid load and concentration variation. The average thickness for C = 0.65 is 43.3% at 0.01 kg/(m·s) and 44% at 0.05 kg/(m·s), higher than that for C = 0.45. The higher average film thickness is due to a change in thermophysical properties with concentration.

The publication of this article was funded by the Qatar National Library (QNL).

The authors would like to acknowledge the resources and support provided by the College of Science and Engineering (CSE) and the Qatar Environment and Energy Research Institute (QEERI) of Hamad Bin Khalifa University (HBKU). The publication of this article was funded by the Qatar National Library. 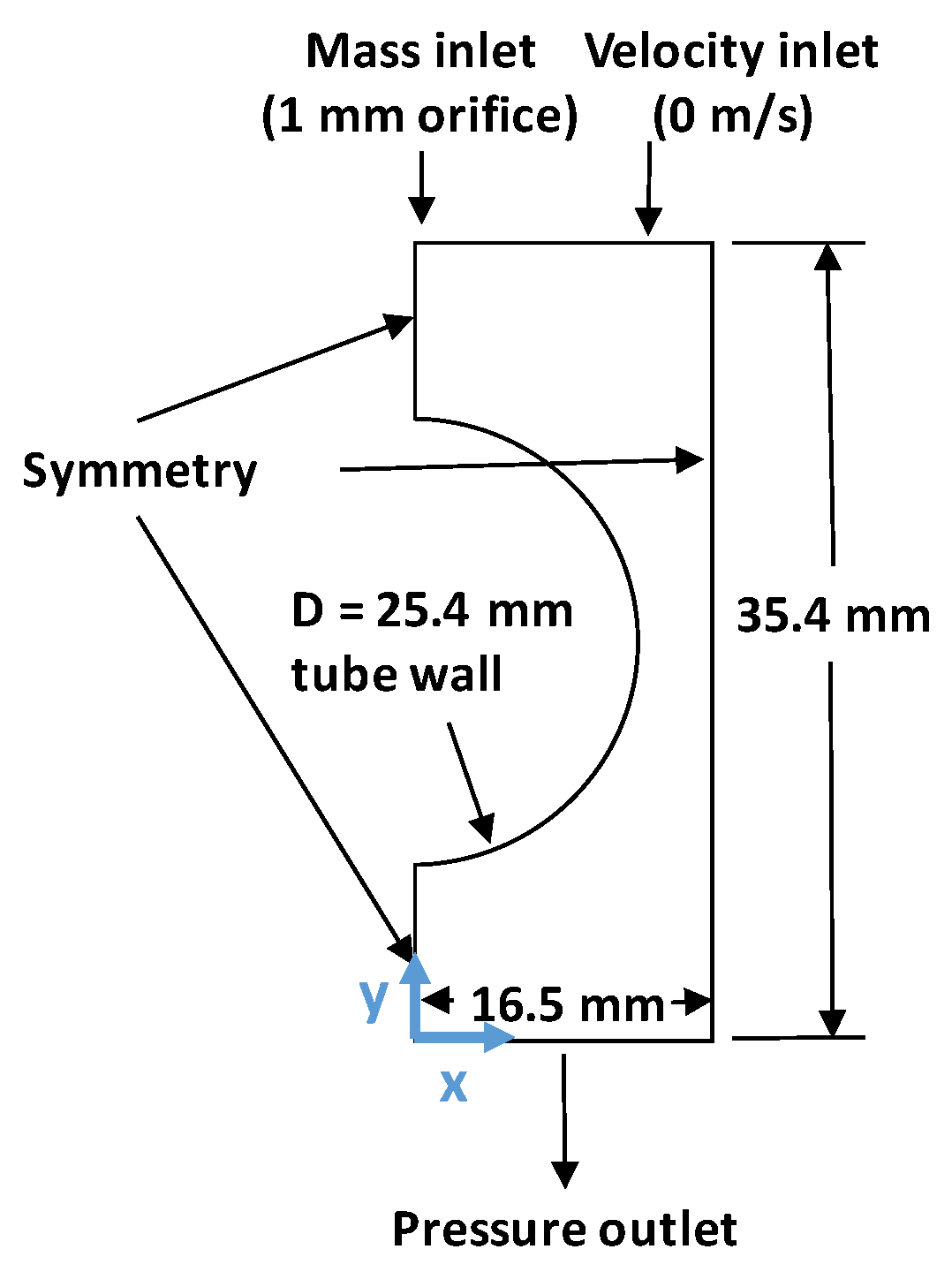 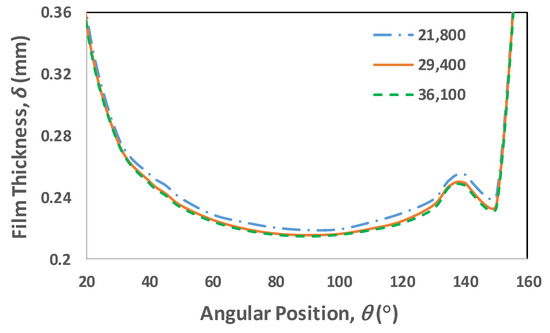 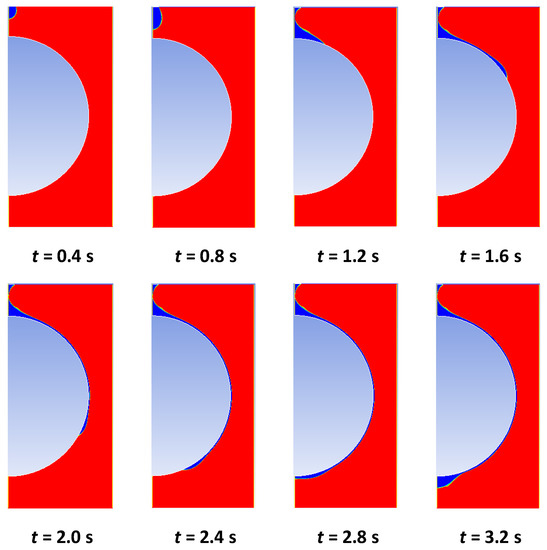 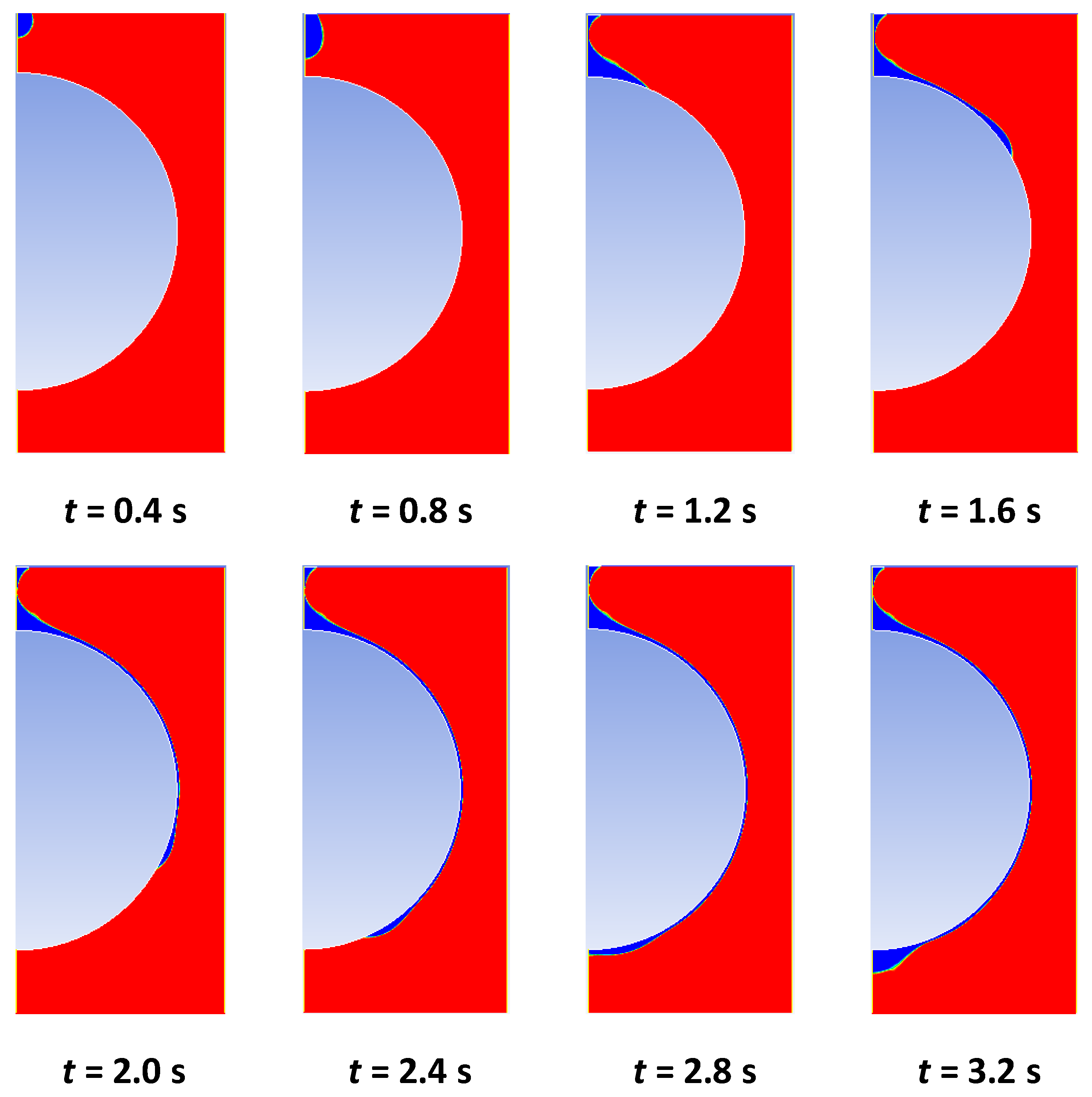 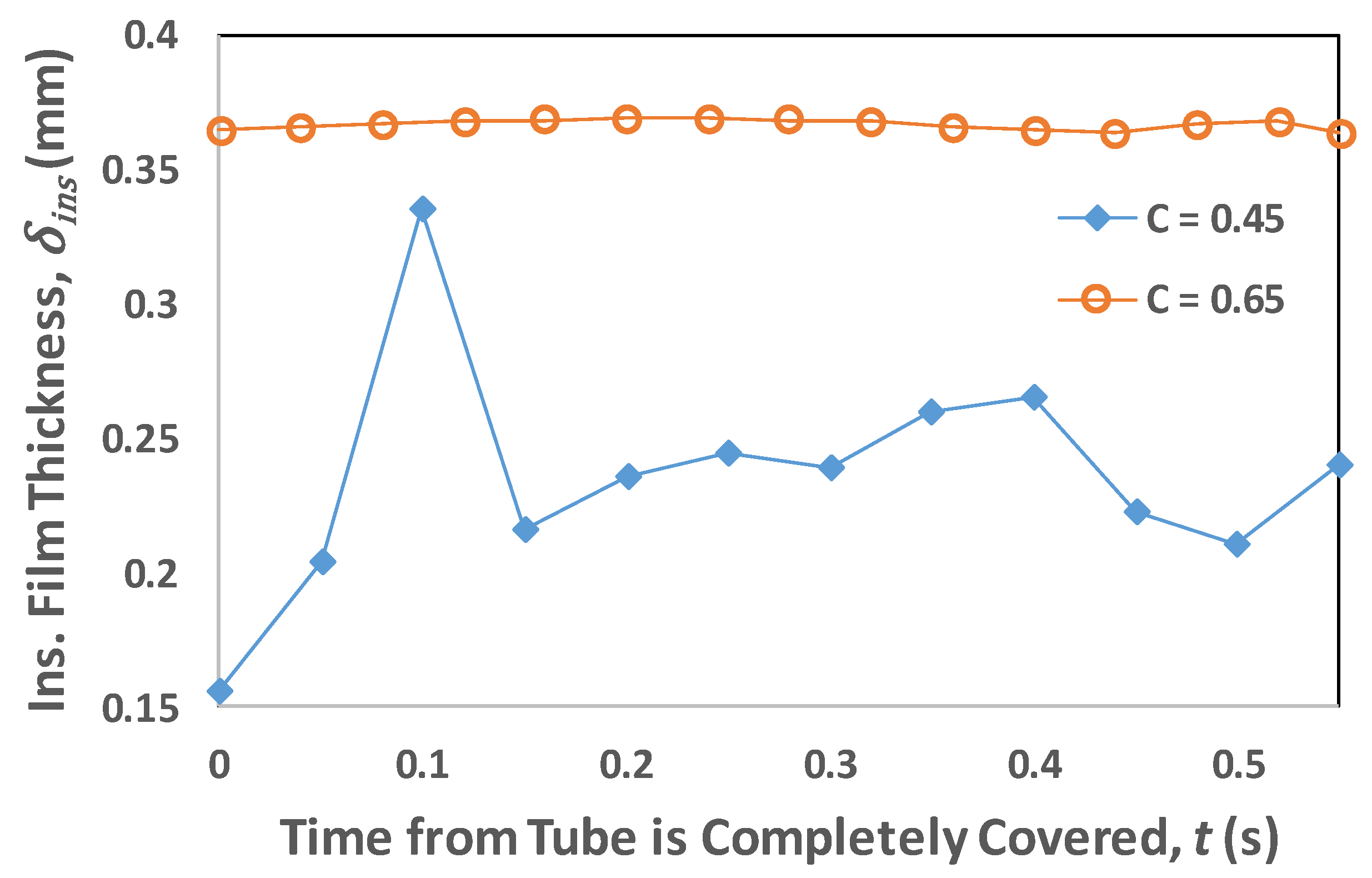 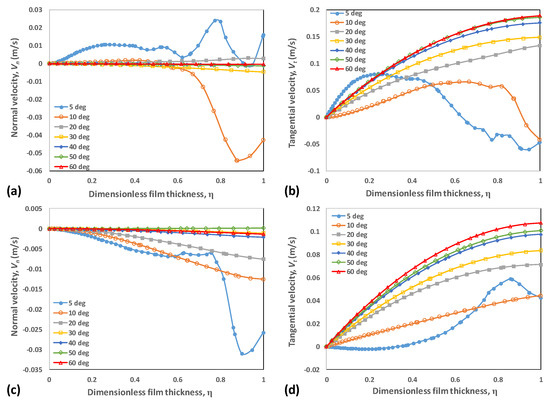 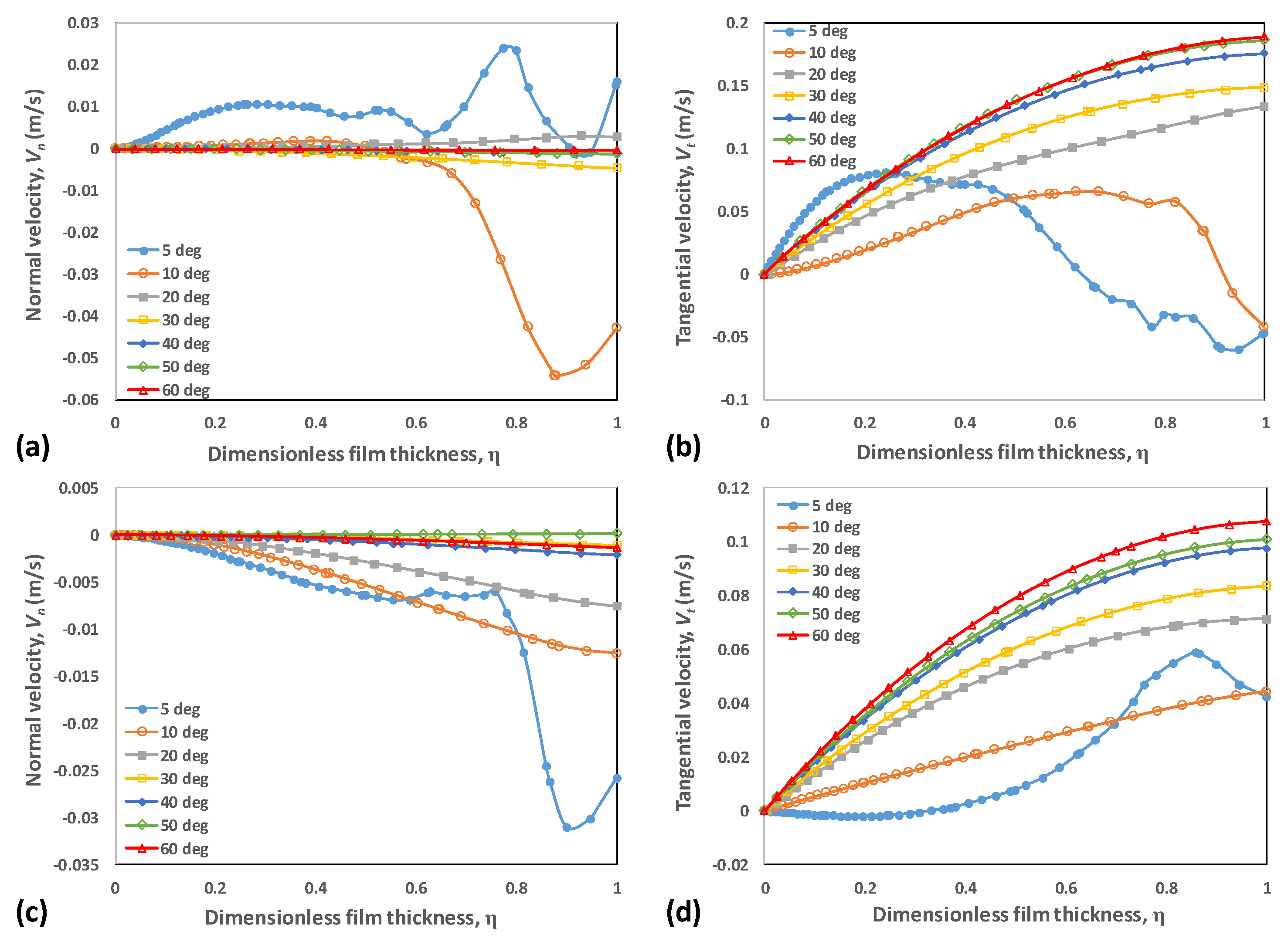 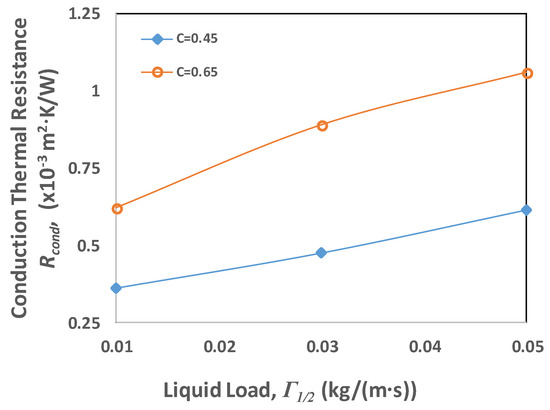 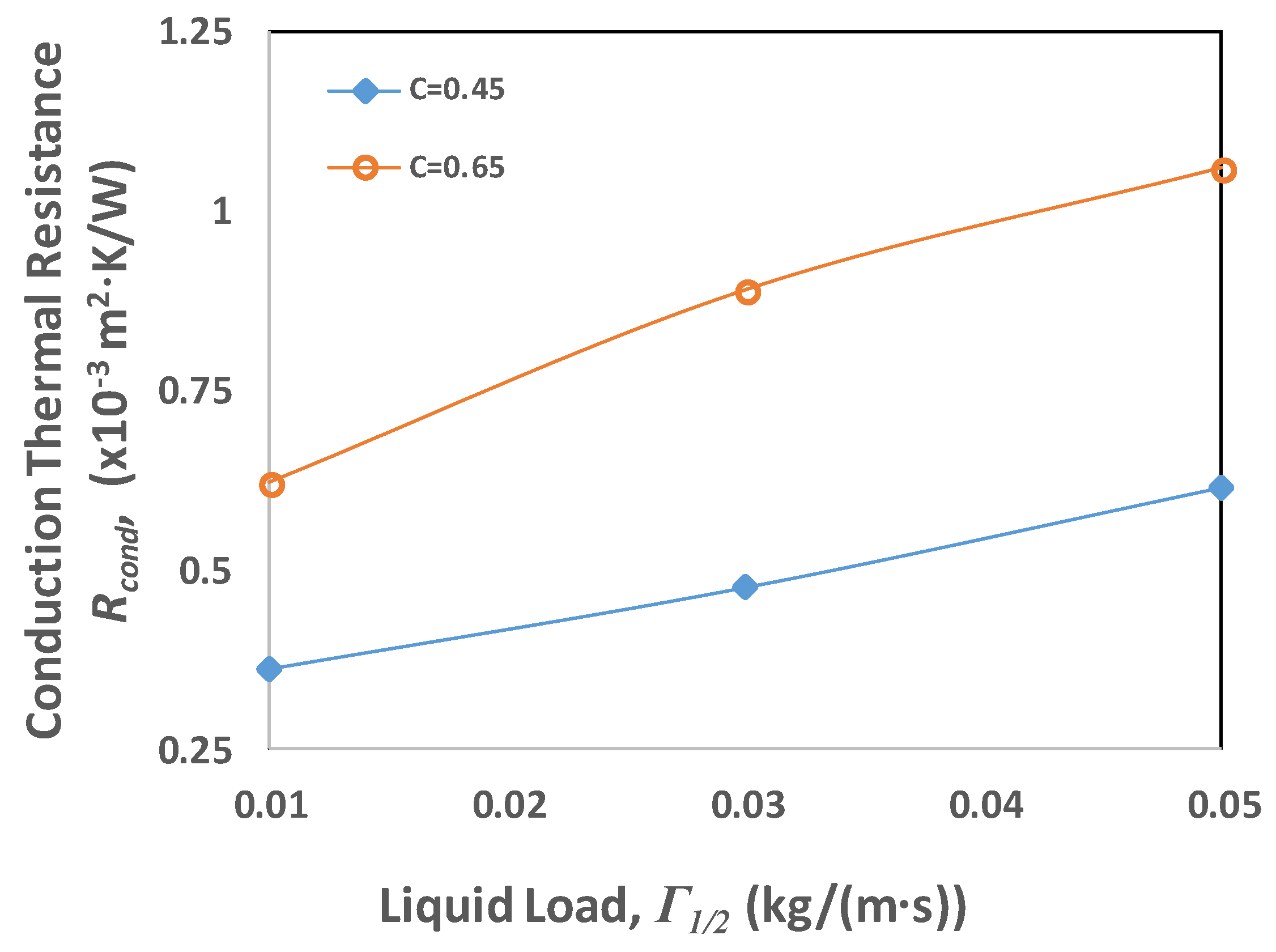