This paper analyses the effects of regional renewable electricity self-sufficiency targets on the power system in Germany. For this purpose, an interdisciplinary approach from social sciences and energy system modelling was chosen, which allows considering qualitative factors such as public acceptance or political stability. Following the concept of context scenarios, consistent raw scenarios are generated by a cross-impact balance analysis (CIB), and the scenarios are quantified by the unit commitment and expansion cost minimisation model ENTIGRIS considering power plants, storages, and the electricity grid. This approach enables an understanding of the system framework conditions and their relationships and allows the combination of qualitative and quantitative scenario descriptors. The most important factors for setting regional self-sufficiency targets were identified through interviews. The main system effects identified are: The regional distribution of generation capacities is strongly influenced by a more demand-oriented installation of generation capacities. This leads to less grid reinforcement, but higher rates of curtailment. In all scenarios, higher utilization of the PV roof potential instead of ground mounted could be observed. The total system costs are increasing only slightly with regional self-supply targets. In general, it was found that the influence of regional self-sufficiency targets is less pronounced in scenarios that already achieve high national RES shares than in scenarios that achieve lower shares, since technology, storage and grid expansion measures are necessary anyway to achieve high RES shares. Overall, the effects here are rather small and the regional objective is not associated with major disadvantages for the system. In a future characterised by stagnation, the system can benefit from regional targeting, as higher renewable shares and lower costs can result. The main conclusion therefore is that regional target setting seem to be beneficial for the overall power system, in terms of system cost, national RE share, acceptance and CO2-emissions. View Full-Text
Keywords: interdisciplinary; cross-impact-balance; autarky; context scenarios; power system optimization; decentralization; social science interdisciplinary; cross-impact-balance; autarky; context scenarios; power system optimization; decentralization; social science
►▼ Show Figures 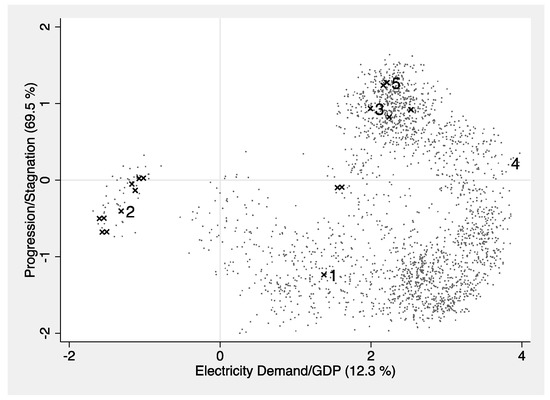