Rotor stator interaction (RSI) is an important phenomenon influencing performances in the pump, turbine, and compressor. In this paper, the correlation-based transition model is used to study the RSI phenomenon between a translational cascade of airfoils and a flat plat. A comparison was made between computational results and experimental results. The computational boundary layer velocity is in reasonable agreement with the experimental velocity. The thickness of boundary layer decreases as the RSI frequency increases and it increases as the fluid flows downstream. The spectral plots of velocity fluctuations at leading edge x/c = 2 under RSI partial flow condition f = 20 Hz and f = 30 Hz are dominated by a narrowband component. RSI frequency mainly affects the turbulence intensity in the freestream region. However, it has little influence on the turbulence intensity of boundary layer near the wall. A secondary vortex is induced by the wake–boundary layer interaction and it leads to the formation of a thickened laminar boundary layer. The negative-vorticity wake also facilitates the formation of a thickened boundary layer while the positive-vorticity wake has a similar effect, like a calmed region which makes the boundary layer thinner. View Full-Text
Keywords: rotor stator interaction; boundary layer; secondary vortex rotor stator interaction; boundary layer; secondary vortex
►▼ Show Figures 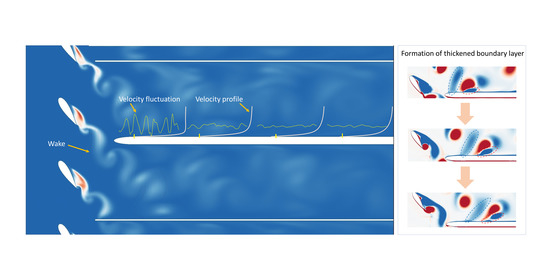