Machine Learning: A Useful Tool in Geomechanical Studies, a Case Study from an Offshore Gas Field
Next Article in Special Issue

The electrogenic biofilm and the bio-electrode interface are the key biocatalytic components in bioelectrochemical systems (BES) and can have a large impact on cell performance. This study used four different anodic carbons to investigate electrogenic biofilm development to determine the influence of charge accumulation and biofilm growth on system performance and how biofilm structure may mitigate against pH perturbations. Power production was highest (1.40 W/m3) using carbon felt, but significant power was also produced when felt carbon was open-circuit acclimated in a control reactor (0.95 W/m3). The influence of carbon material on electrogenic biofilm development was determined by measuring the level of biofilm growth, using sequencing to identify the microbial populations and confocal microscopy to understand the spatial locations of key microbial groups. Geobacter spp. were found to be enriched in closed-circuit operation and these were in close association with the carbon anode, but these were not observed in the open-circuit controls. Electrochemical analysis also demonstrated that the highest mid-point anode potentials were close to values reported for cytochromes from Geobacter sulfurreductans. Biofilm development was greatest in felt anodes (closed-circuit acclimated 1209 ng/μL DNA), and this facilitated the highest pseudo-capacitive values due to the presence of redox-active species, and this was associated with higher levels of power production and also served to mitigate against the effects of low-pH operation. Supporting carbon anode structures are key to electrogenic biofilm development and associated system performance and are also capable of protecting electrochemically active bacteria from the effects of environmental perturbations. View Full-Text
Keywords: biofilm; carbon material; charge accumulation; microbial fuel cells; pH biofilm; carbon material; charge accumulation; microbial fuel cells; pH
►▼ Show Figures 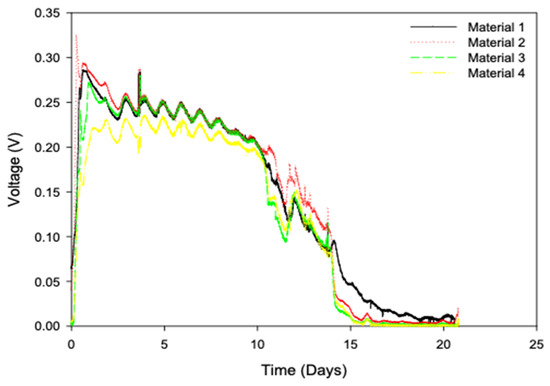