Although there are many studies available in literature about biomass pyrolysis or devolatilization using thermogravimetric analysis (TGA), the effects of important operating parameters have infrequently been investigated for pine wood particle combustion. Consequently, the present study investigates the influence of particle size (63 µm to 1 mm), heating rate (5 to 243 °C/min), and air flow rate (10 to 150 mL/min) on the mass loss of pine wood using TGA. Additionally, the kinetic parameters considering the different conditions were determined to be incorporated in a numerical model. The effect of the heating rate on the thermal decomposition behavior has shown that the thermogravimetric and derivative thermogravimetric curves were shifted to higher temperatures with the increase in the heating rate. In this way, the heating rate affects the temperature at which the highest mass loss rate occurs as well as its value. Furthermore, comparing the higher and lower heating rate, the time to complete the combustion and the release are around 22 times higher when a higher heating rate is applied. On the other hand, the effects of four different air flow rates were compared and similar results were obtained. Regarding the kinetic analysis, it was verified at various heating and air flow rates with different particle sizes that the highest activation energy was mostly obtained during char combustion (~131–229 kJ/mol). Furthermore, in the second stage higher heating rates had the highest reactivity, and in the third stage there were not too many changes. In terms of the effect of air flow rates, a maximum variation of 15 kJ/mol was obtained in the third stage and, therefore, no significant effect on the reactivity for all particles was found. View Full-Text
Keywords: pine wood; thermogravimetric analysis; heating rate; air flow rate; kinetics pine wood; thermogravimetric analysis; heating rate; air flow rate; kinetics
►▼ Show Figures 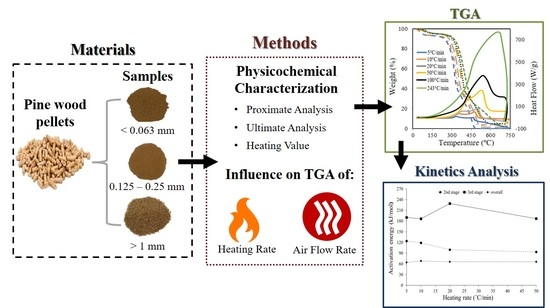