During the extraction of hard coal in Polish conditions, methane is emitted, which is referred to as ‘mine gas’. As a result of the desorption of methane, a greenhouse gas is released from coal seams. In order to reduce atmospheric emissions, methane from coal seams is captured by a methane drainage system. On the other hand, methane, which has been separated into underground mining excavations, is discharged into the atmosphere with a stream of ventilation air. For many years, Polish hard coal mines have been capturing methane to ensure the safety of the crew and the continuity of mining operations. As a greenhouse gas, methane has a significant potential, as it is more effective at absorbing and re-emitting radiation than carbon dioxide. The increase in the amount of methane in the atmosphere is a significant factor influencing global warming, however, it is not as strong as the increase in carbon dioxide. Therefore, in Polish mines, the methane–air mixture captured in the methane drainage system is not emitted to the atmosphere, but burned as fuel in systems, including cogeneration systems, to generate electricity, heat and cold. However, in order for such use to be possible, the methane–air mixture must meet appropriate quality and quantity requirements. The article presents an analysis of changes in selected parameters of the captured methane–air mixture from one of the hard coal mines in the Upper Silesian Coal Basin in Poland. The paper analyses the changes in concentration and size of the captured methane stream through the methane capturing system. The gas captured by the methane drainage system, as an energy source, can be used in cogeneration, when the methane concentration is greater than 40%. Considering the variability of CH4 concentration in the captured mixture, it was also indicated which pure methane stream must be added to the gas mixture in order for this gas to be used as a fuel for gas engines. The balance of power of produced electric energy in gas engines is presented. Possible solutions ensuring constant concentration of the captured methane–air mixture are also presented. View Full-Text
Keywords: methane emissions; coal seam mining; gas engines; greenhouse gas methane emissions; coal seam mining; gas engines; greenhouse gas
►▼ Show Figures 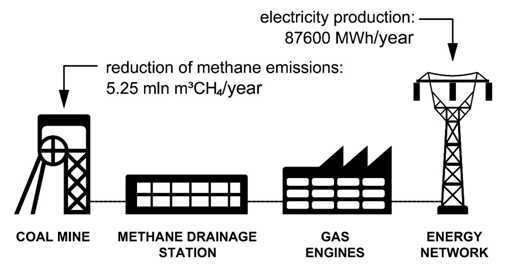