The ground current of a high-voltage direct current (HVDC) transmission system can cause DC bias in transformers near the grounding electrode during monopole operations, which affects the alternating current (AC) power system operation. Owing to multiple bias current flow paths, a capacitance blocking device installed at the neutral point of a transformer may increase the DC bias in adjacent transformers, while suppressing the DC current in that transformer. This paper introduces the use of an effective bias current indicator to describe the effect of the grounding current on transformers in a network, considering the wiring characteristics of the autotransformers and the power system topology. Additionally, a combination optimization method for the capacitance and resistance is applied in order to determine the minimum number of installed devices that restrict the maximum effective bias current throughout the network to a permissible range. A genetic algorithm based on an improved roulette selection method is adopted to solve the optimal configuration problem. The method is validated by using a test case based on the Xizhe HVDC transmission receiving-end grid near the Jinsi grounding electrode. The configuration of the capacitance and resistance was optimized by the improved genetic algorithm. This method can achieve the desired level of DC bias management with fewer devices than the conventional method, which verifies the feasibility and superiority of the proposed optimization method.
Keywords: capacitance blocking device; DC bias; optimal configuration; resistance current limiting device capacitance blocking device; DC bias; optimal configuration; resistance current limiting device

The ground current will flow into the Earth when an HVDC transmission system operates in monopole mode, which forms a closed loop through the Earth. This ground current will impose a potential on the substation grounding system near the electrode because of the different soil resistivities. The calculation method of the Earth potential near the HVDC grounding electrode has been thoroughly discussed in previous works (e.g., [2,12]). The potential distribution satisfies the following Laplace equation according to the inferences of Maxwell’s Equations: where V represents the potential. The DC grounding electrode is generally regarded as a point current source when considering a large-scale geoelectric potential distribution. At the interface of adjacent soil i and j with different conductivities, the boundary conditions are given by the following: where Vi and Vj are the soil potentials, ρi and ρj are the soil conductivities, and n is the outer normal direction pointing toward the air side. The grounding electrode is used as a boundary for solving the field, considering it is a good conductor and its surface is an equipotential. After determining the field equations and boundary conditions, the ground potential distribution around the DC grounding electrode can be solved by numerical calculations using advanced commercial numerical calculation software.

When suppressing the DC bias by installing CBD and RCLD devices at the neutral points of the transformers, the priority is to ensure that the effective bias current of all of the transformers in the power system does not exceed a set limit. On this basis, the minimum number of devices necessary that must be installed in the entire network can be determined. The objective function is given by the following: where S represents the number of installed CBDs or RCLDs, Alim is the set limit, and Ti is the blocking device. The constraint is defined as follows:
An exhaustive method can be used to solve the above optimal configuration problem when only a few substations exist in the target system. In other words, according to the constraints, all of the configuration schemes can be exhausted to find the global optimal solution. However, the computational cost of the exhaustive method increases rapidly with the increasing number of substations, eventually making the problem impossible to solve. Thus, the problem should be solved using a discrete optimization to rationally select the substation where the device should be installed, considering that numerous substations exist in the equivalent model. In this case, an artificial intelligence method can be adopted, such as genetic [22,23,24], particle swarm [25,26], or simulated annealing algorithms [27,28]. After researching various model algorithms, we found that a genetic algorithm is particularly suitable for this discrete optimization problem, because it can effectively manage any form of objective function and constraint. A genetic algorithm can also effectively search global information with probabilistic meaning. In this paper, the resistance continuity problem is neglected when selecting the RCLD, and a resistance value of 3 Ω is directly selected and optimized together with the CBD, to illustrate that combination optimization is better than single optimization.
Genetic algorithms evolve better approximate solutions from generation to generation, according to the principle of survival of the fittest after the initial population emerges. In each generation, individuals are selected according to their fitness in the problem domain. The population representing the new solution set is generated by combining crossovers and mutations with genetic operators of natural genetics, and the individual of the new population is closer to the optimal solution. This paper also amends the traditional roulette selection method (Figure 3) to improve the selecting ability of the selection operator. The population size is set as N, and the probability of each individual being selected is P1, P2,…,PN, where the sum of the selected probabilities is 1. Each round of selections produces a uniform random number between [0, 1] as the selection pointer, and an individual is selected based on where the pointer falls. After n rounds of selection, the probability of individual selection in round p (0 < p < n) is compared, and the individual with the greatest probability is selected. The p value can be adjusted freely according to the actual situation during the selection operator process. This improved roulette selection method not only reduces the errors caused by the randomness, but also maintains the diversity of the population. The overall process is described in Figure 4. First, a random matrix is generated, which is uniformly distributed between [0, 1] and mutually identical to the population matrix. Each element value in the population matrix is determined by each corresponding element value in the random matrix. The elements on each chromosome in the population matrix represent whether the corresponding substation installs a device, as well as what kind of device to install. The initial population size is 80, and the maximum number of iterations is set to 200. Moreover, the crossover probability and mutation probability are 0.9 and 0.2, respectively, where the crossover probability determines whether a crossover operation is performed, and the mutation probability determines whether a mutation occurs in the child. This variation is directly reflected in the transition from the original installation to the other two installations. The new individuals are generated by crossover and mutation, according to the rule that, if the number of installations cannot decrease, the experienced crossover and mutation will be invalid.

To determine the minimum number of installed devices, the maximum effective bias current of all substations being less than the limit is taken as the constraint condition. The improved genetic algorithm is applied to configure the number of CBDs installed under different limit currents, and the results are shown in Figure 9, with the non-optimal configuration for comparison. Note that the non-optimal method is a commonly used straightforward solution. Specifically, the non-optimal method decides the priority for installing CBDs by considering the magnitude of the effective bias current. The larger the current is, the higher the priority is.
Our optimization method determines that significantly fewer CBDs are required than the non-optimal method. Thus, the optimization configuration method can remarkably reduce the number of CBDs to achieve the same expected level of management, thereby reducing the cost of managing the transformer DC bias. Furthermore, the number of devices determined by the combination optimization, a single RCLD optimization, and a single CBD optimization are compared, in Figure 10, to illustrate the superiority of the combination optimization.
Figure 10 clearly demonstrates that RCLD optimization cannot always restrict the substation maximum effective bias current to a permissible range. Furthermore, installing an excessive number of RCLDs can seriously change the system operation status, thus changing the overall system structure and redistributing the power flow. In that case, the configuration scheme would require further optimization, whereas the CBD optimization does not have such a limitation. However, the single management device optimization methods require more devices to achieve the same management effect compared with the combination optimization, which is economically unfavourable. Our combination optimization method is applicable to any type of AC system, and scalable to other relevant systems, such as geomagnetically induced current (GIC).

This paper proposed a method for optimizing the configuration of devices for suppressing DC bias in substations. The outcomes were as follows:
The transformer effective bias current is verified to be a more reasonable indicator for describing the influence of the grounding current on transformers, considering that the DC bias current in the autotransformer series winding cannot be ignored when installing a management device at the neutral point. Additionally, this method is applicable to homologous DC bias management issues.
Our optimization method based on the improved genetic algorithm is validated to configure management devices to suppress transformer DC bias in the overall network. Thus, it is essential to optimize the device configuration instead of only treating the nodes with a bias current exceeding the limit. We revealed that the conventional method will increase the bias current of the adjacent transformers.
We demonstrate that the RCLD optimization method does not reduce the effective bias current of the overall system to below the allowable limits. Additionally, the proposed combination optimization method can achieve the ideal management effect with fewer devices than single CBD optimization, which significantly reduces the management costs.
For future work, we could probe the continuity of the resistance value, which can be optimized using the proposed method. In addition, the impact of slight changes in the system structure on the original combination optimization scheme can be analysed. 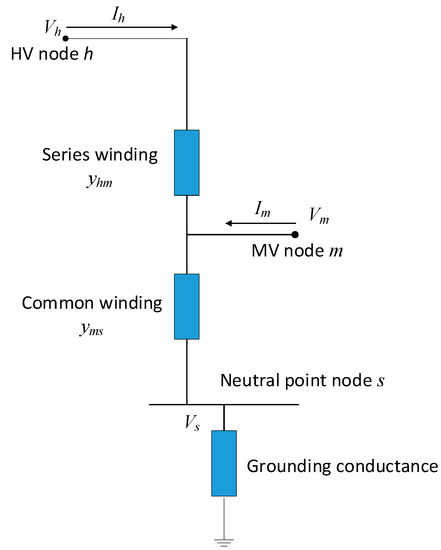 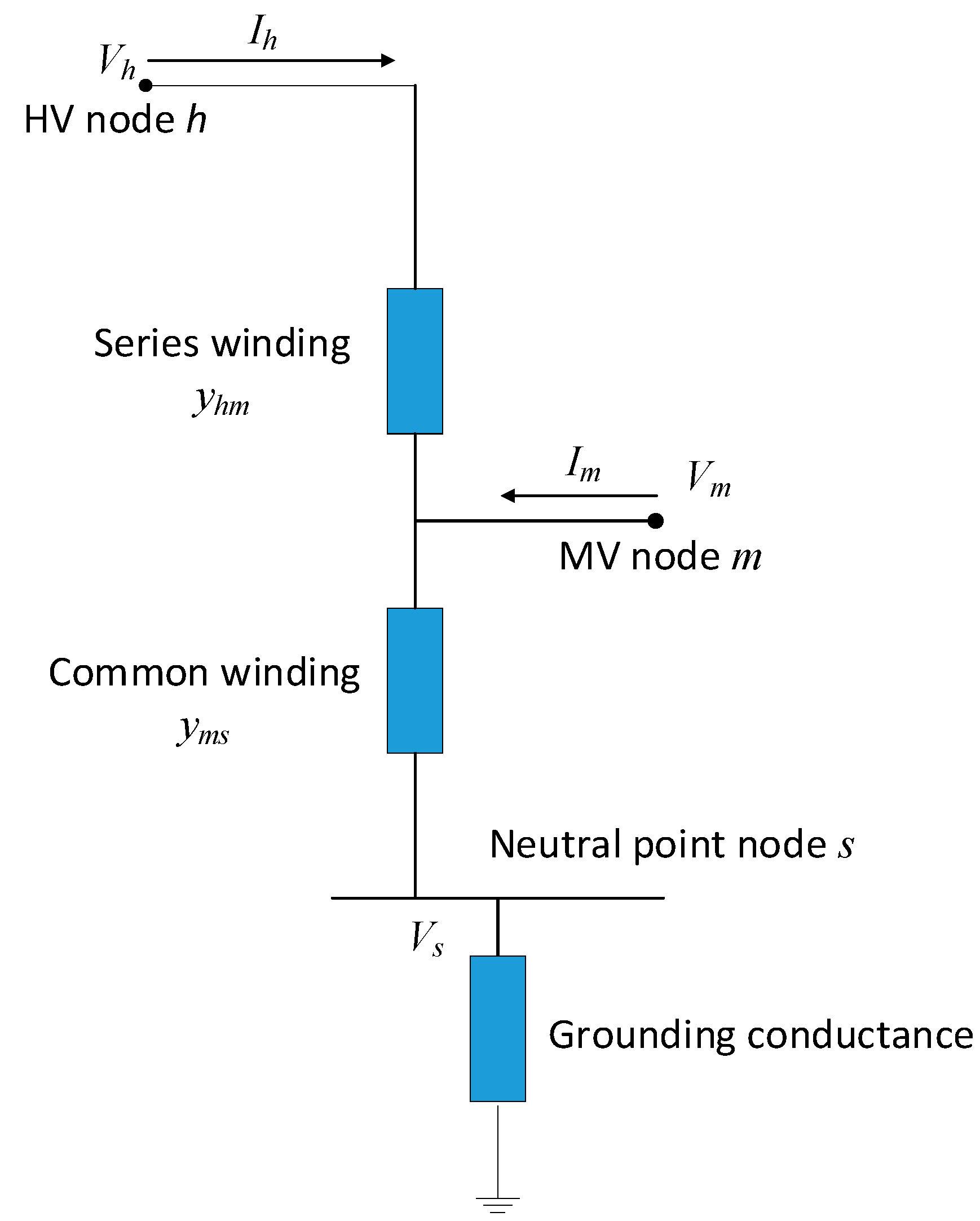 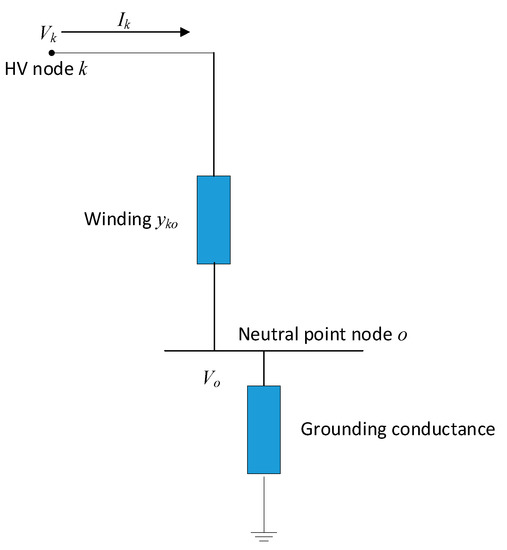 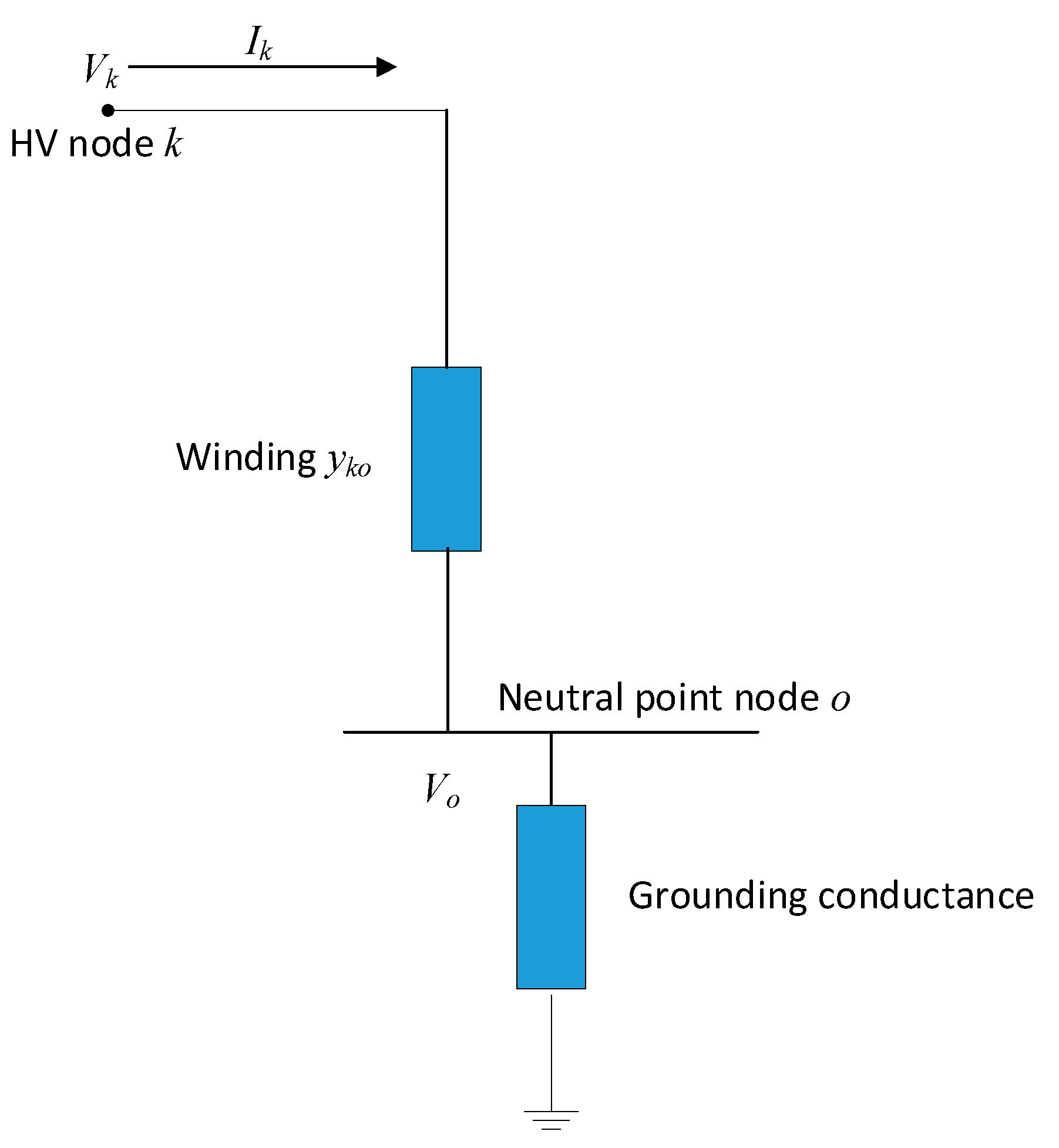 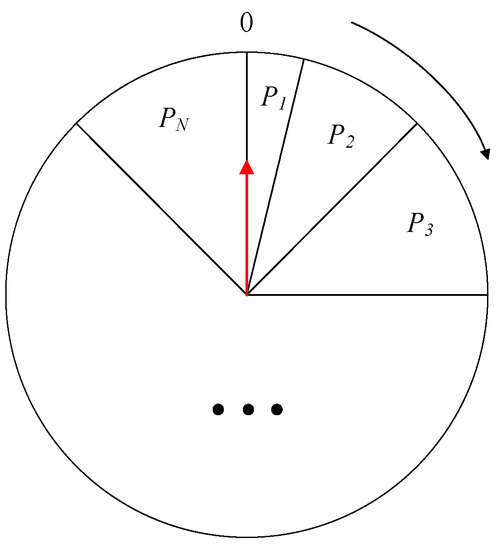 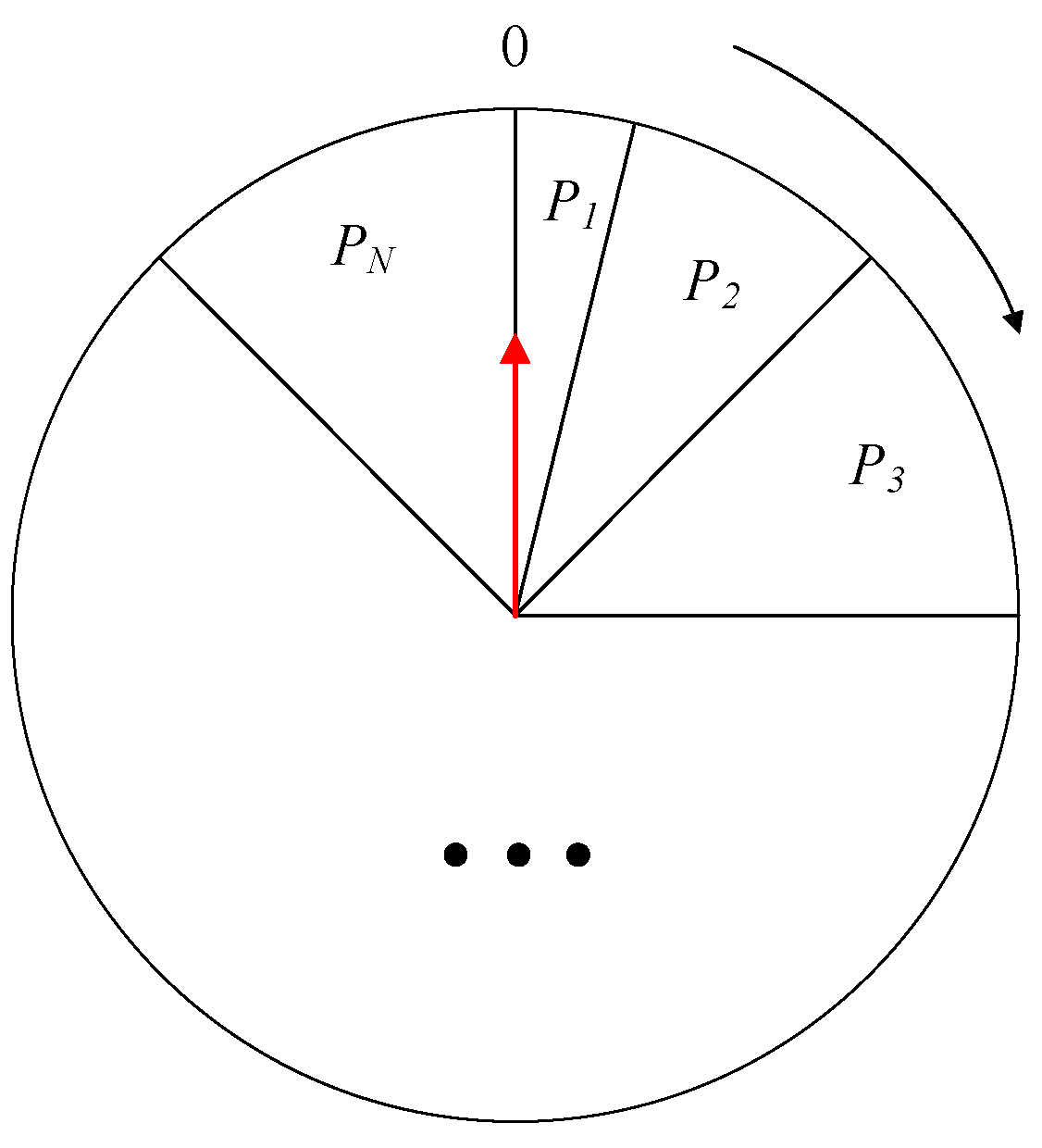 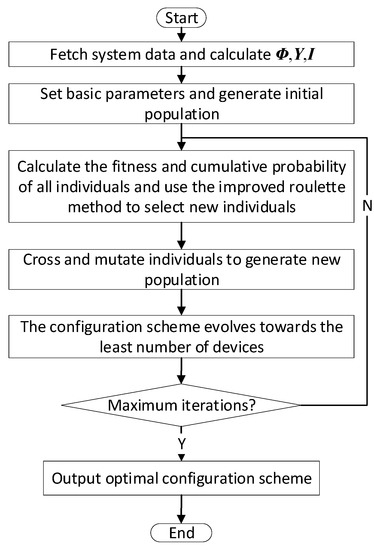 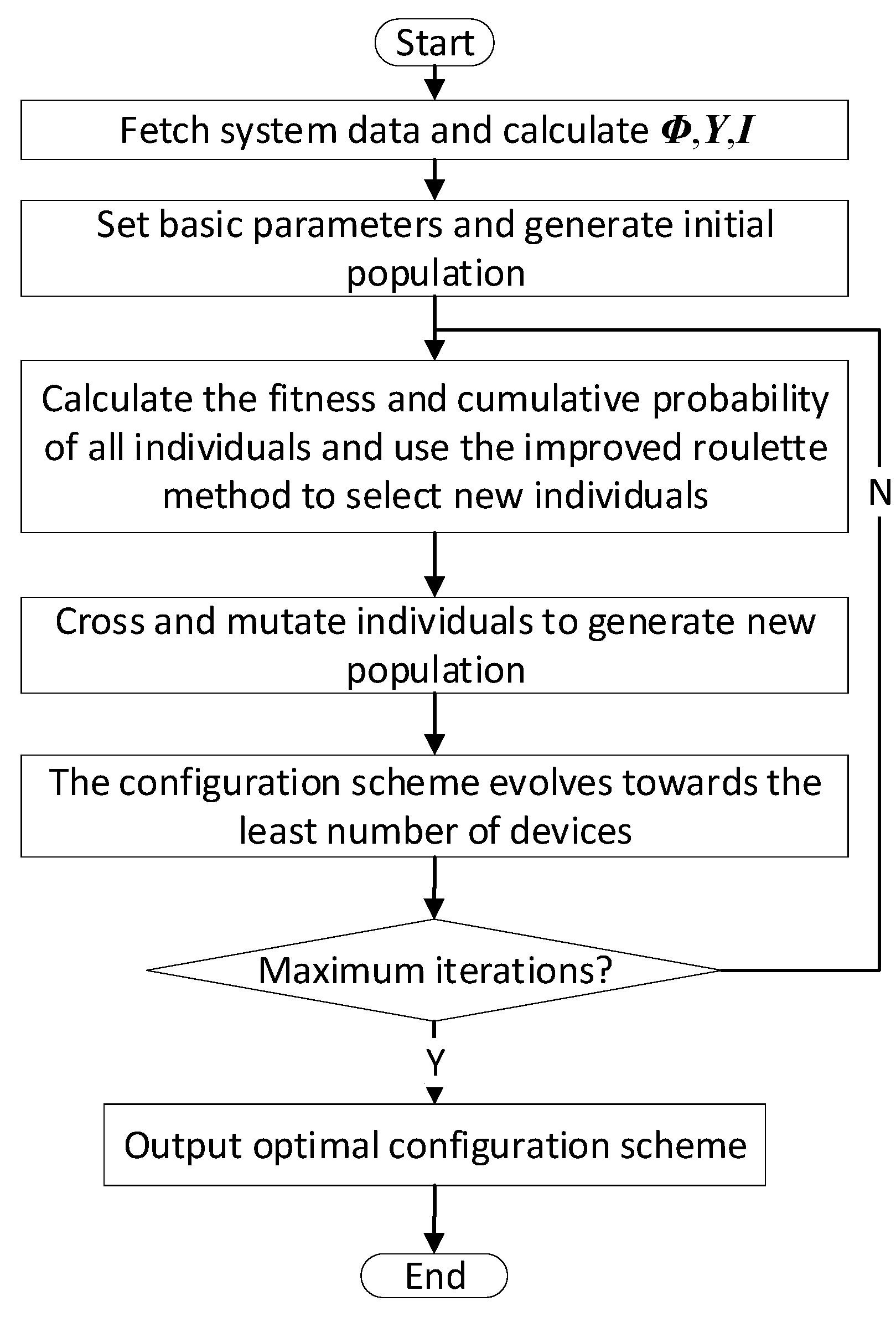 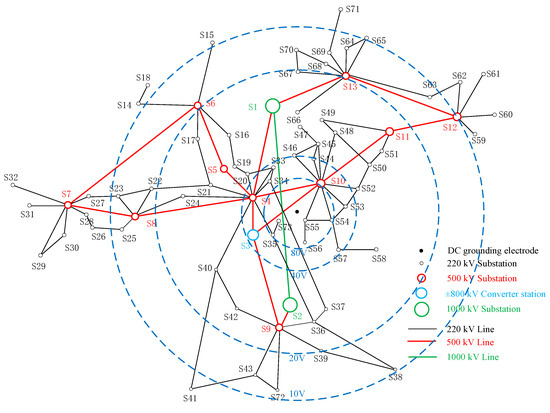 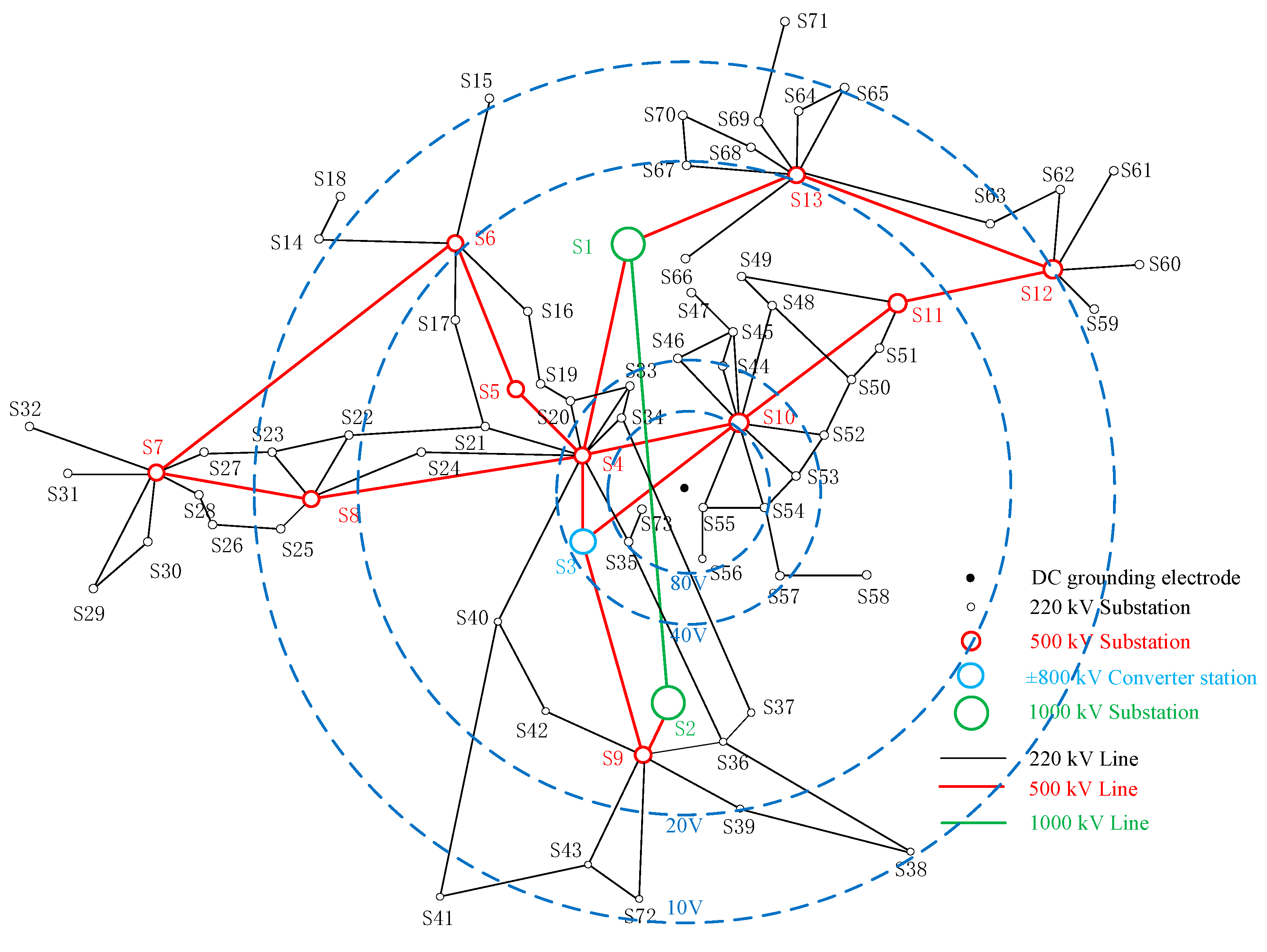 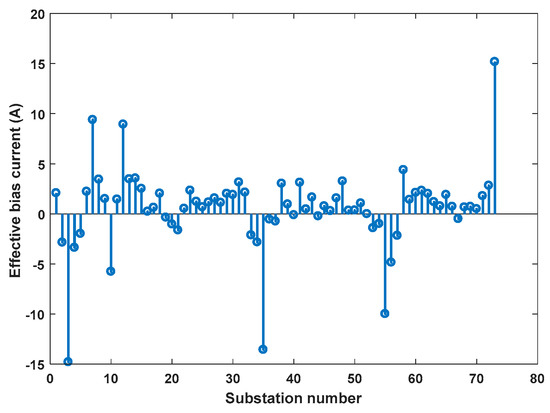 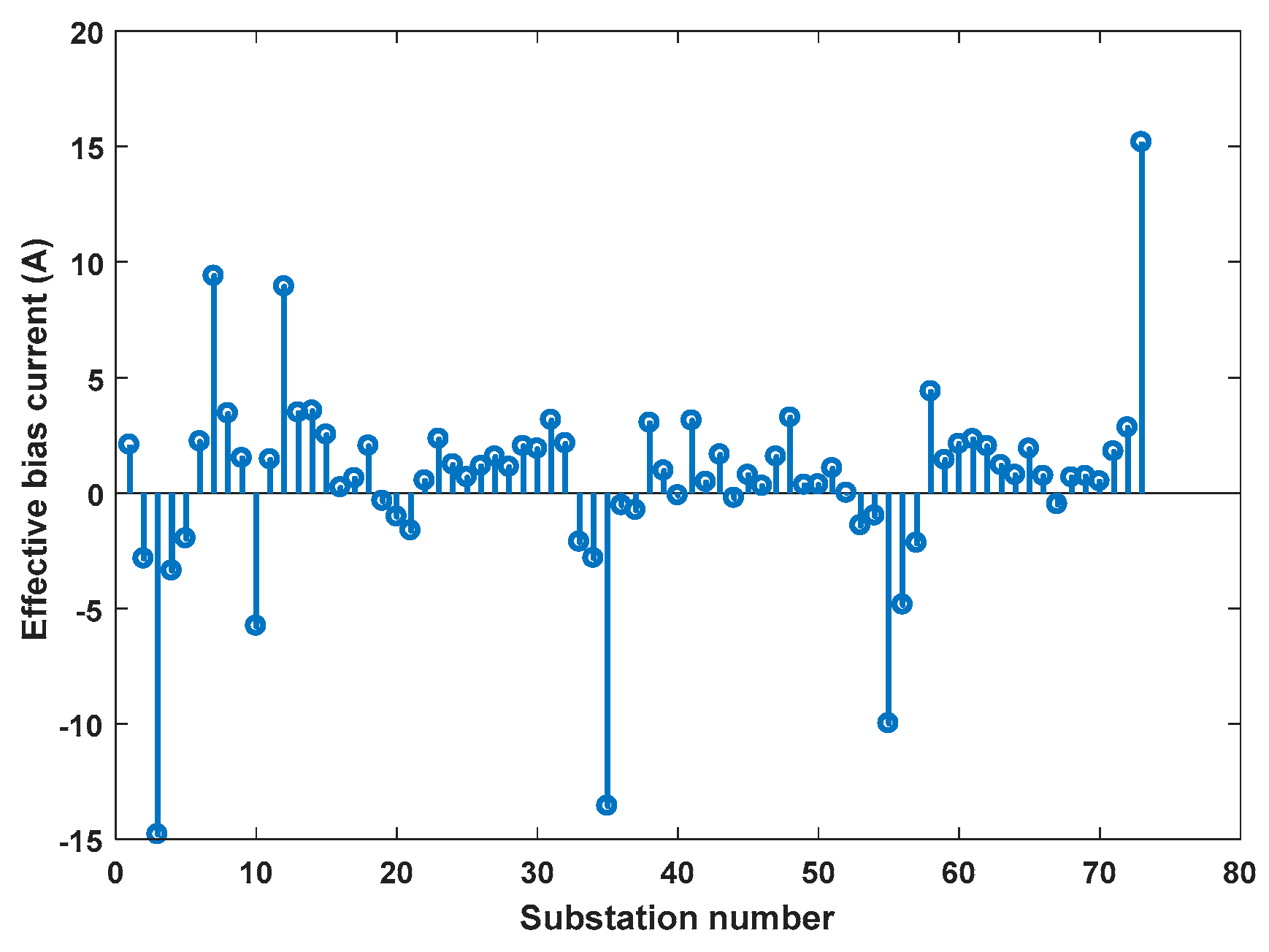 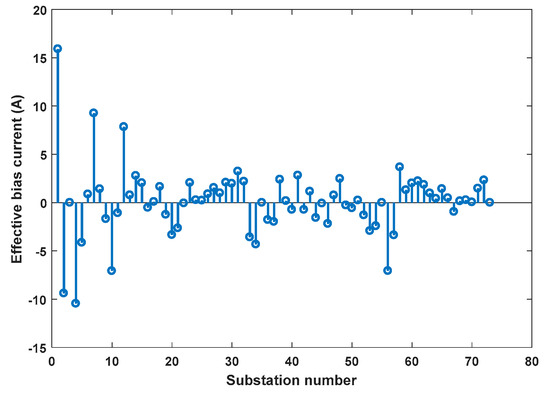 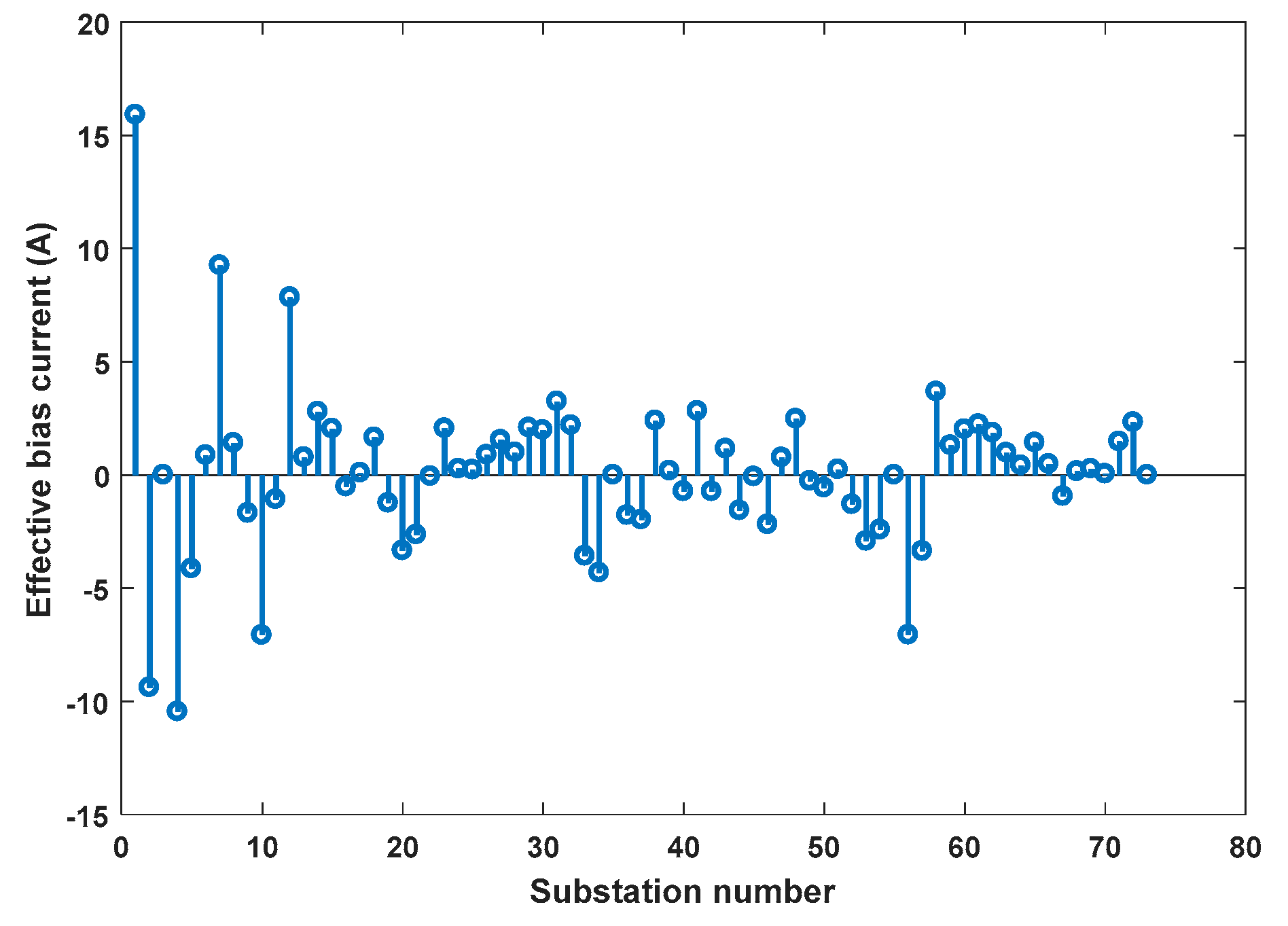 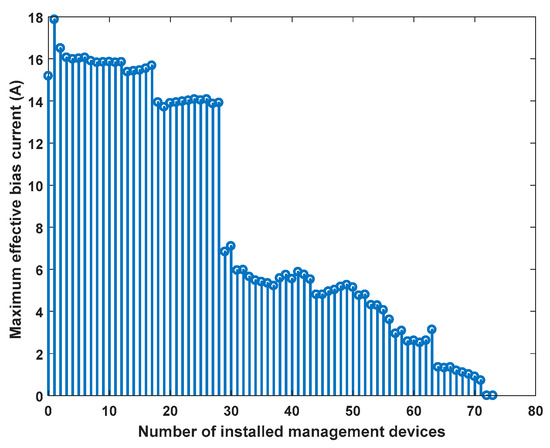 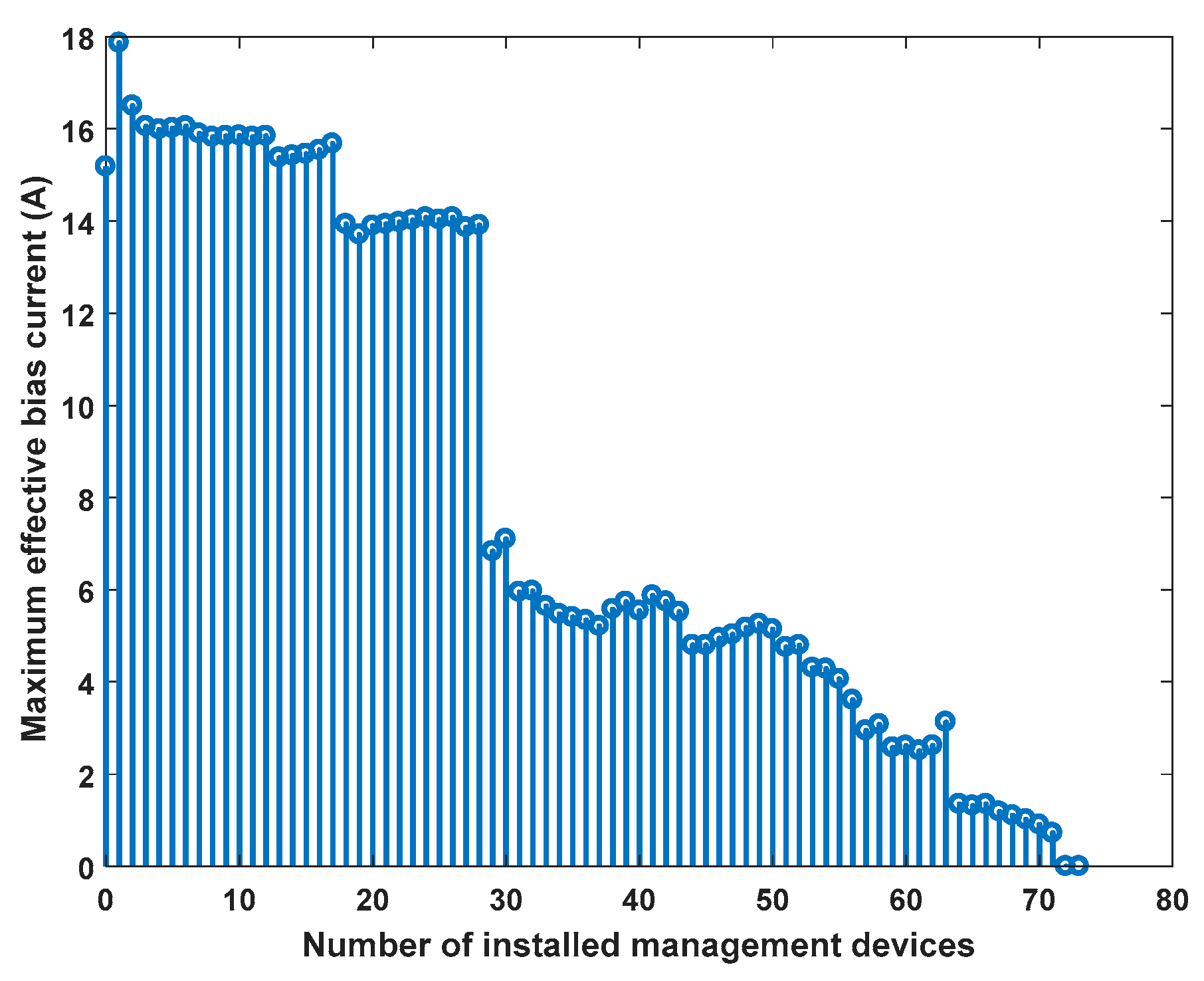 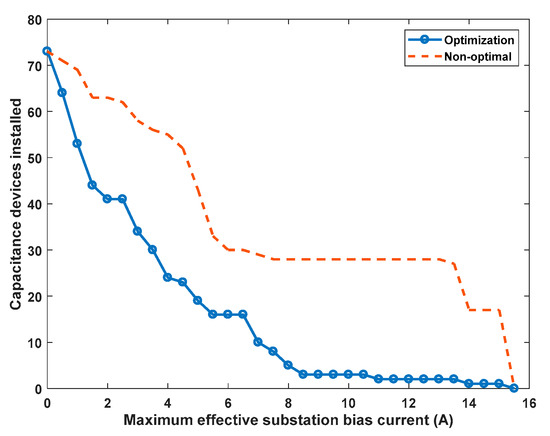 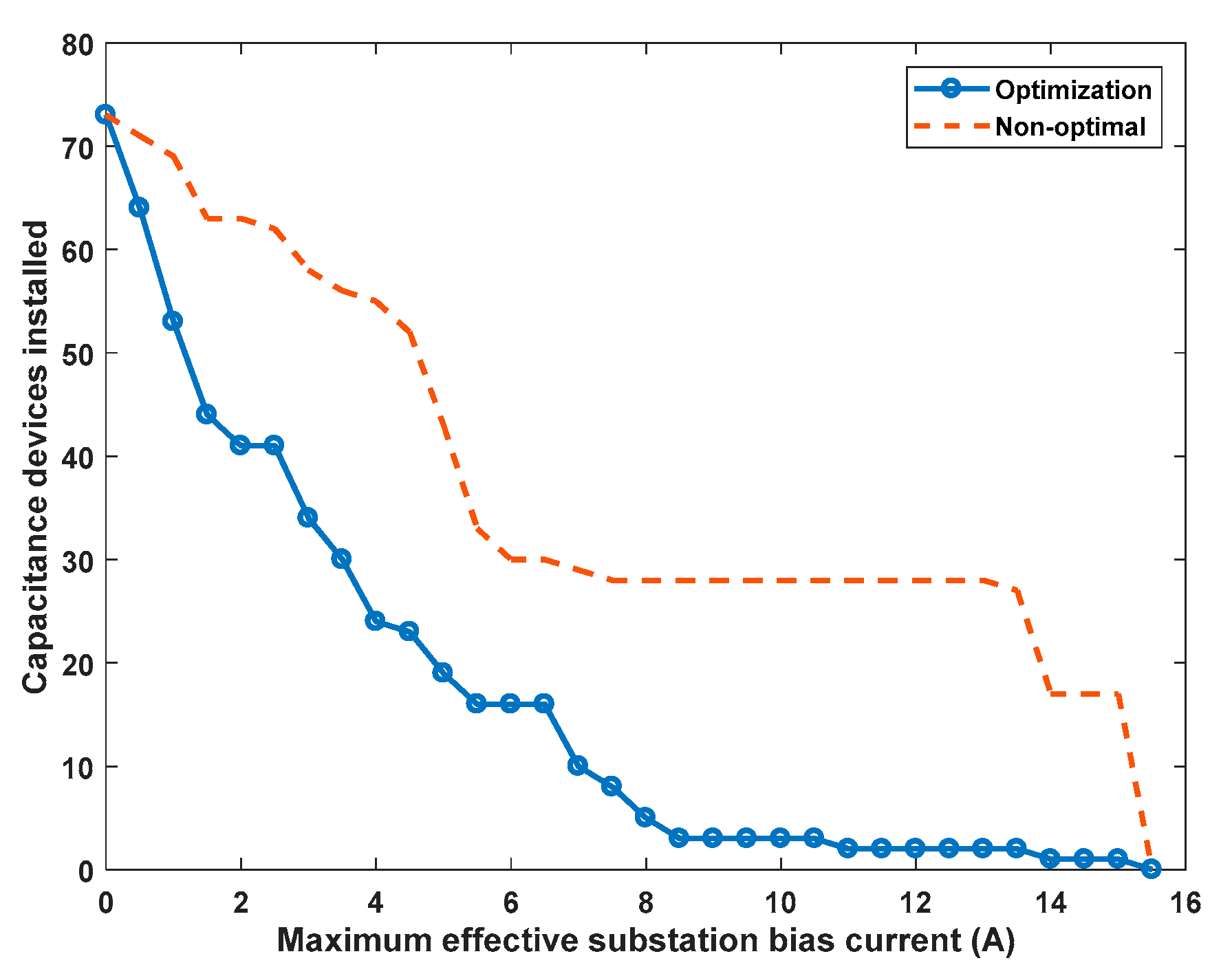 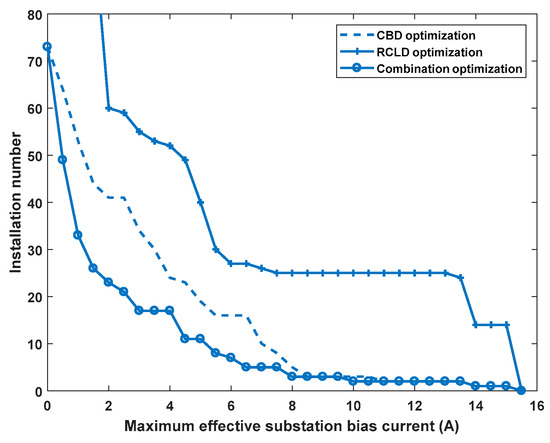 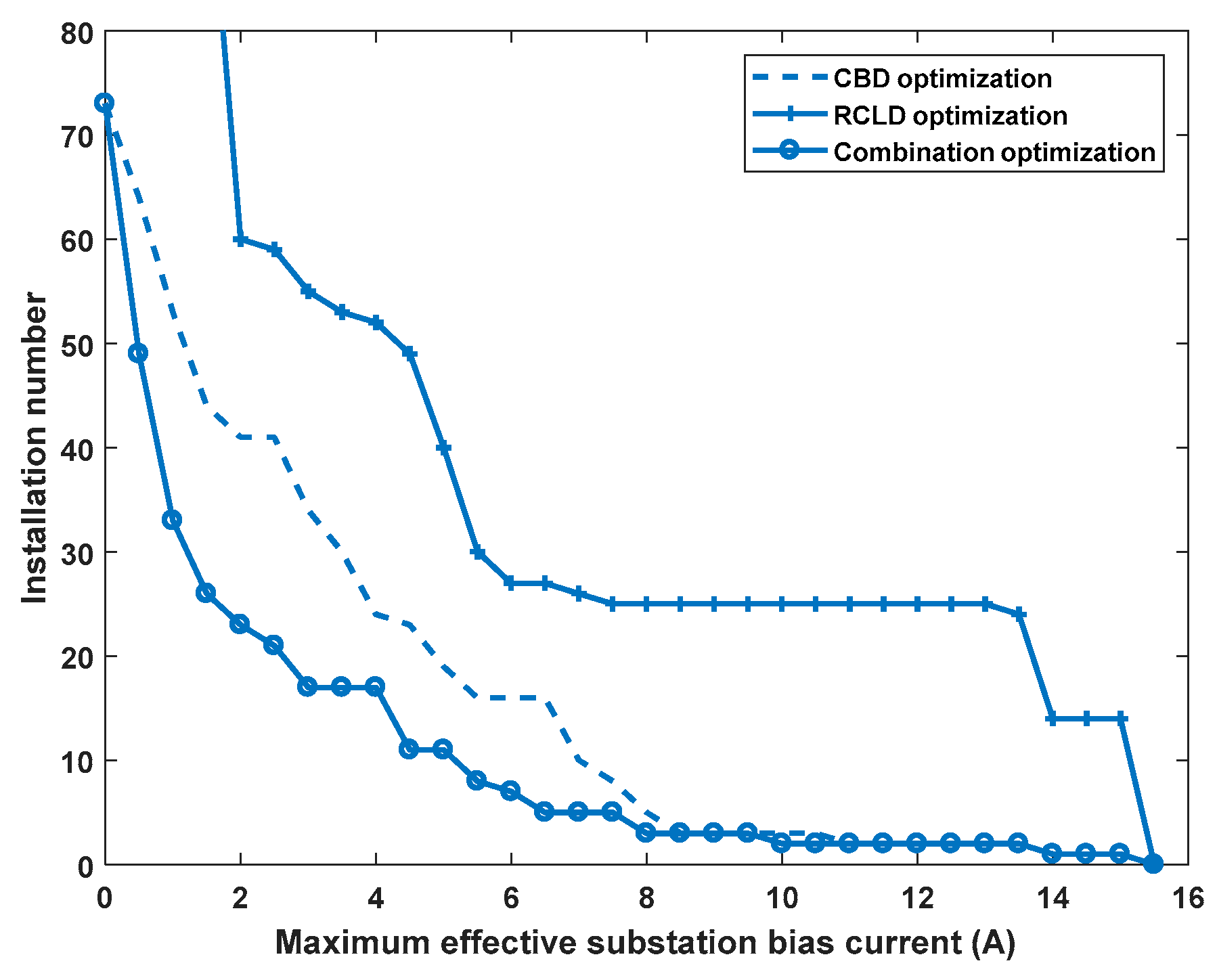