The Levant area of the Middle East suffers from both chronic water scarcity and high population growth. It is also a region highly dependent of fossil fuels. In order to address current and expected water demands, several countries in the region, including Israel, Jordan and the Palestinian Authority (PA), are depending increasingly on desalination, which is expected to intensify energy consumption and energy related emissions. Given that the region also benefits from high levels of solar irradiation nearly year-round, much attention has been given to the possibility of developing renewable energy in general and for desalination specifically. This paper presents partial results of a pre-feasibility study assessing the prospects of transfers of desalinated water from Israel and/or the PA, which have access to the Mediterranean Sea, to Jordan, in exchange for renewable solar-produced electricity from Jordan, which, unlike its neighbors, has an abundance of available open space suitable for solar production. The analysis shows that single-axis tracking photovoltaic (PV) systems appear to be the most economically feasible option. Moreover, the study shows that the proposed idea of international cooperation and water-energy exchanges, while facing political obstacles, could provide numerous economic, environmental and geopolitical benefits to all parties involved. As such, an arrangement such as that examined may be a more promising means of promoting both desalination and renewable energy than if each country unilaterally develops desalination and renewable energy in isolation from one another. View Full-Text
Keywords: desalination; renewable energy; solar energy; photovoltaics; concentrating solar power; water-energy nexus; Middle East desalination; renewable energy; solar energy; photovoltaics; concentrating solar power; water-energy nexus; Middle East
►▼ Show Figures 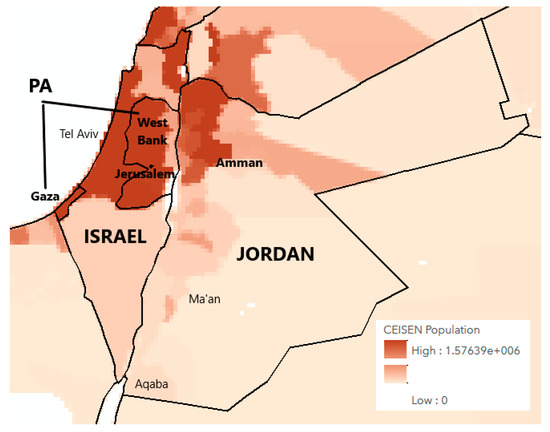