:
Micro-Grid (MG) systems have been extensively studied and deployed to lower the power consumption while reducing the greenhouse gas emissions. Although, the challenge with Renewable Energy Sources (RES) is their uncertain and intermittent nature, things that led the researchers to think about integrating storage devices, especially batteries, into MG systems. The main aim is to store the excess of produced energy for further usage when not enough energy is available. Nevertheless, batteries modeling and characterization is mandatory to identify their parameters and study their performance within MG systems. Moreover, in order to continuously supply electricity to the building, it is required to figure out the optimum size of energy production systems and storage devices. This paper introduces a methodology for MG modeling and performance evaluation. Its main contribution is twofold, (i) battery’s parameters identification, and (ii) modeling and dimensioning method for both standalone and MG systems. An instrumentation platform, composed of recent sensing and actuating equipment, for MG energy management and battery characterization is developed. Simulation and experimental results show the effectiveness of the proposed methodology.
Keywords:
dimensioning; MG systems; stand-alone systems; RES; battery characterization and modeling

Figure 1 describes the different steps of the proposed methodology, (i) battery modeling and characterization, (ii) MG system modeling, simulations and experiments, and (iii) Stand-alone system sizing and performance evaluation. Modeling and characterization is a mandatory step to identify battery’s parameters and study their behaviour and performance within MG systems. Therefore, an instrumentation platform, composed of recent sensing and actuating equipment, has been developed in order to collect the battery’s characteristics (e.g., current and voltage). The data collected have been fed to the Recursive Least Squares (RLS) algorithm. It is an algorithm able to identify the battery’s parameters that minimize the difference between the simulation and experimental results. These parameters have then been integrated into the used battery model presented in [15,16]. Simulations and experiments have been conducted under the same conditions in order to validate the proposed battery characterization methodology.
Concerning the MG system, each component of the system has been modeled and connected to the battery’s model. The aim is to simulate the whole system, using the same conditions as in the experimentation in order to figure out first the system’s behaviour and validate the components’ models. These validated models could be used for conducting further simulations accordingly. Regarding the third step, a sizing method has been introduced for stand-alone systems. Then, simulations have been carried out using the components’ models validated in the second step. Similarly, experimentations have been conducted and obtained results are compared to those from simulations. The results validate the introduced sizing method and show full independence from the electric grid. This methodology can be applied to other stand-alone systems.

3. Simulation and Experimental Results of the MG System

4. Sizing of the Stand-Alone System

The sizing of the MG system, which is introduced in the previous section, depends on many important parameters (e.g., consumption profile, solar irradiation) [4,5,6]. Regarding the solar irradiation, the PVGIS application that provides the solar irradiation using the geographical coordinates of any site in Africa or Europe, have been used. In order to provide the average monthly solar radiation all over the year, geographical coordinates of our site (Latitude 34°00′47″ N, Longitude 6°49′57″ W, Altitude 46 m) were inputted. Concerning the consumption, a set of voltage and current sensors have been deployed in order to monitor the ventilation system’s daily electricity consumption (see Figure 9), which is around 430 Wh.
Then, the peak power of the PV panels (in W) is computed using the following expression [5,6]: where Eelec is the maximal daily electricity consumption (kWh/day), is the irradiance at standard conditions STC (equal to 1000 W/m2), Ei is the lowermost average monthly solar irradiation all over the year (kWh/m2/day); for our site, it is equal to 4790 kWh/m2/day that corresponds to the December’s irradiation, PR (Performance Ratio) that depends on many parameters, such as battery’s efficiency, converter’s efficiency, voltage drop in the cables, other losses in the installation, the integration mode, is a correction coefficient for stand-alone systems, which is between 0.55 and 0.75 [31]. The value used in our case is equal 0.70.
In order to meet the needed electricity demand, the required PV panels’ peak power is 128.243 Wc. As mentioned above, the peak power of the PV module used in this experiment is 265 W, its open circuit voltage is 38.3 V and 8.98 A is the short-circuit current. As a result, one module is required in order to operate the system all over the year, which is computed using the following equation: Nt = , with a total peak power of 265 W and a total area of 1.63 m2. Concerning the regulator, the same one as in the previous experiment have been used because the PV module has not changed. Furthermore, the battery’s capacity (CAh), which is in Ah, is expressed by the following equation [5]: where Eelec is the maximal daily electricity consumption (Wh/day), NAut is the number of days of autonomy (day), DoD is the Depth of Discharge (%), ηB is the battery’s efficiency (%), and Vbat is the battery’s voltage (V). The estimation of the battery’s capacity requires the knowledge of the number of days of autonomy, which differs from site to another according to weather conditions. The objective is to supply the electricity to the building from batteries when there is no production. In our case, the number of days of autonomy fluctuates between one and three days. In our computations, the value used is one day. A battery of 12 V with a DoD equal to 60% and a battery’s efficiency of 85% has been chosen. 70.26 Ah was found to be the required capacity to install. As a result, we have chosen to work with one battery of 12 V and 75 Ah manufactured by “Electra”. Besides, the electric grid is connected to the system through a rectifier that provides 12 V as output voltage with the current needed by the ventilation system.
In order to prove the accuracy of the sizing method, several experiments and simulations have been carried out. However, for simulating the whole system, the characterization of the battery is required. After identifying the battery’s parameters that are shown in Table 2, the battery’s model has been connected to the other components’ models and several simulations and experiments have been carried out.
The simulation and experimental results illustrated in Figure 10 demonstrate that during the night, the electricity needed by the ventilation system is supplied totally by the battery and there is no switching to the electric grid. These results prove the accuracy of the sizing method and also the efficiency of the used battery’s model and the characterization methodology.

In this work, a MG system has first been deployed in our EEBLab, and experimental results revealed the power control’s behavior, which allows switching between the PV-battery system and the electric grid. Also, these results demonstrate that the electricity needed to operate the ventilation system is not totally produced by the deployed MG system. For that, a sizing method based on the consumption profile of the ventilation system and the weather conditions of our site, has been introduced in order to upgrade the MG system for the aim to produce the total electricity needed by the load. The results prove the accuracy of this method for sizing this type of systems. Besides, in order to simulate the MG system for the aim to compare the simulation to the experiment, a model of each component of the system is needed. For that, all the components of the system have been modeled. In this work, studying the behavior of the batteries within the MG system was our main focus. Therefore, their characterization must be determined in order to model them properly. As a result, a platform composed of sensing/actuating equipment was firstly developed and deployed in order to gather several battery’s characteristics (e.g., voltage, current) that were used to build the battery’s model. Simulations of the MG system have been conducted under the same experimental conditions, and the results compared to the experimental ones showed similar behavior. Furthermore, the obtained results showed the accuracy of the battery characterization methodology. Therefore, our ongoing work concentrates on the improvement of the battery’s model by taking into consideration the influence of the temperature on the battery’s properties. Also, we focus on the battery’s SoC forecasting, which is necessary for establishing predictive control approaches in order to manage in real-time our MG system [32].

This research was funded by USAID under the PEER program, grant number 5-398. 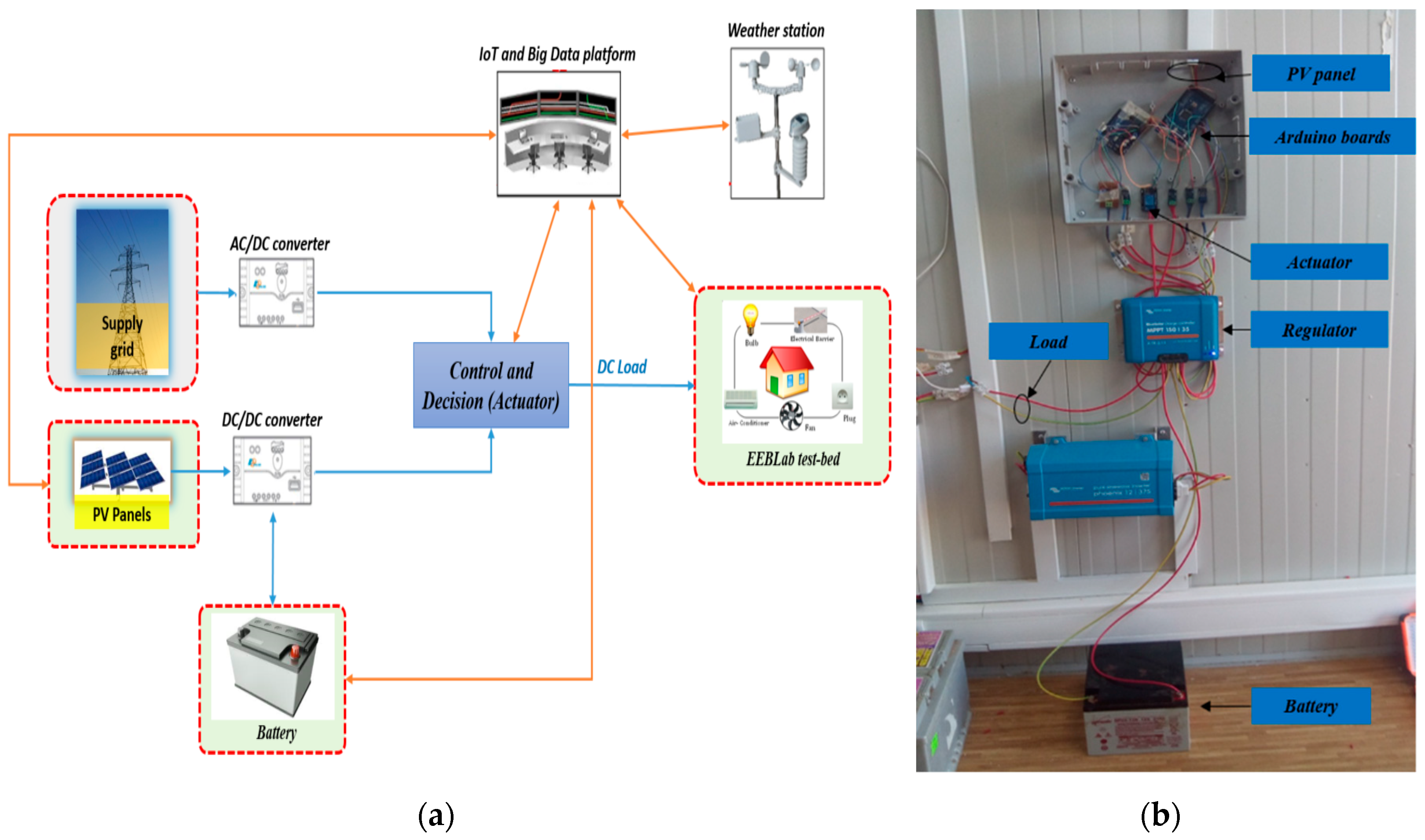 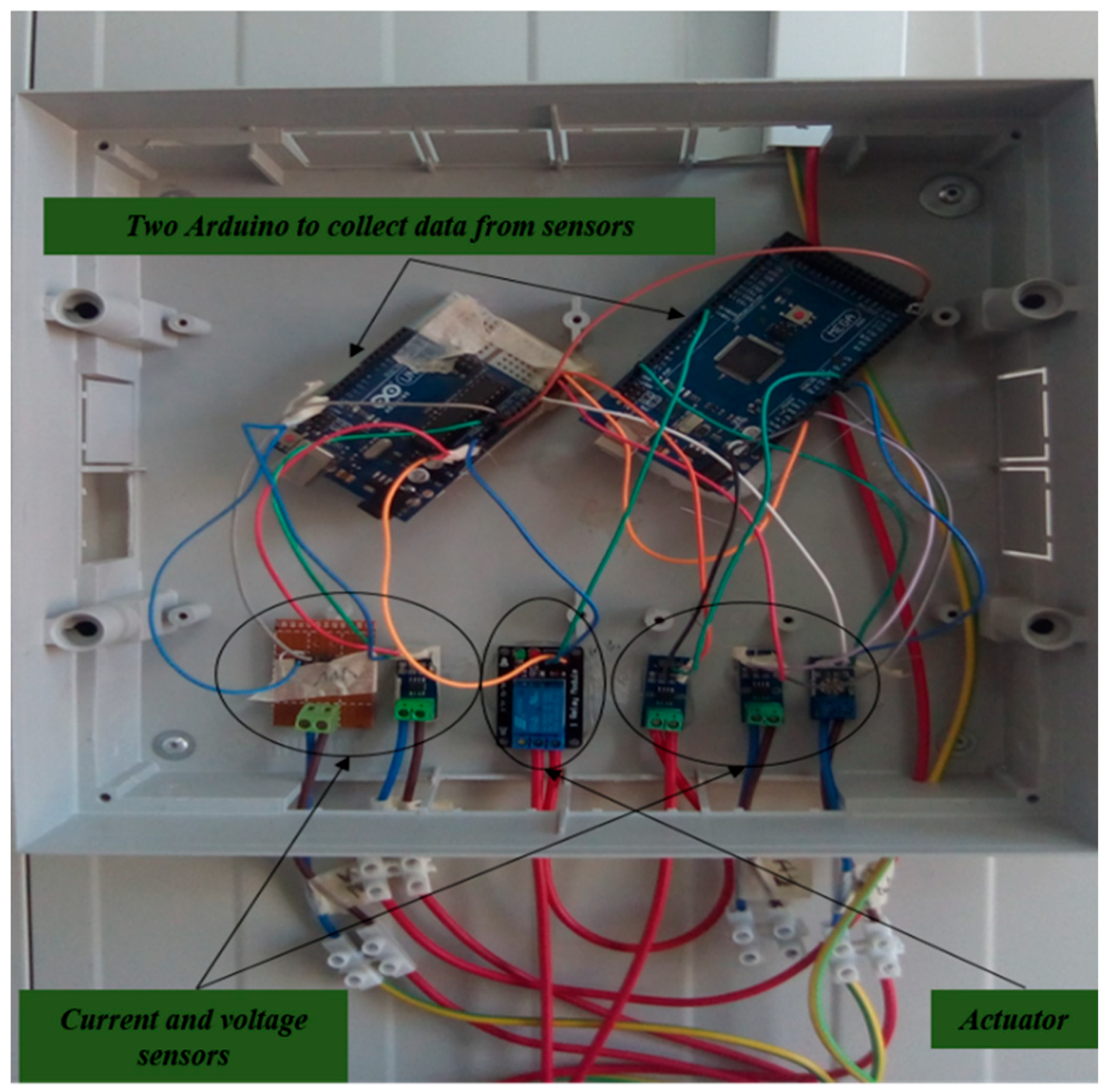 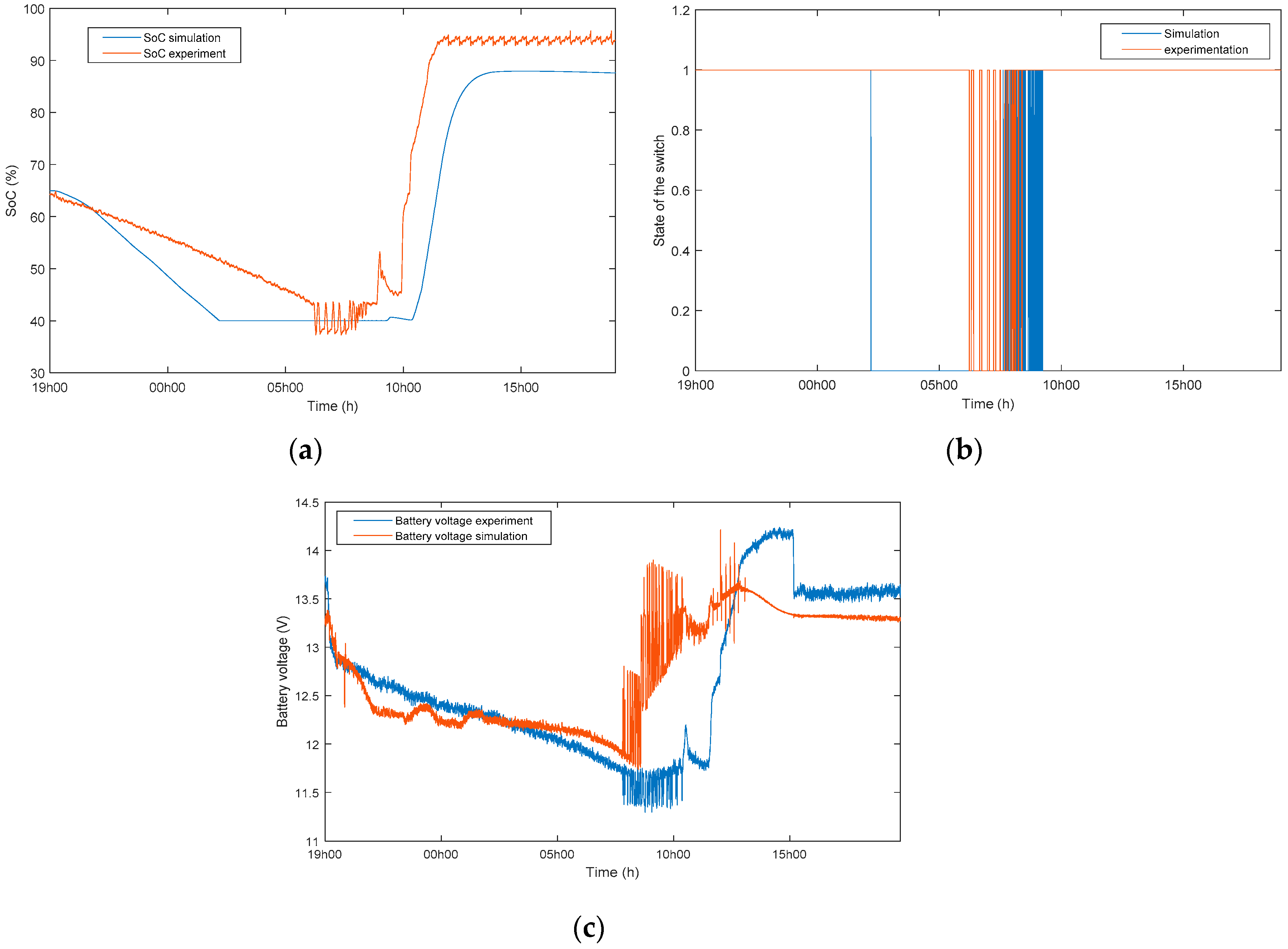 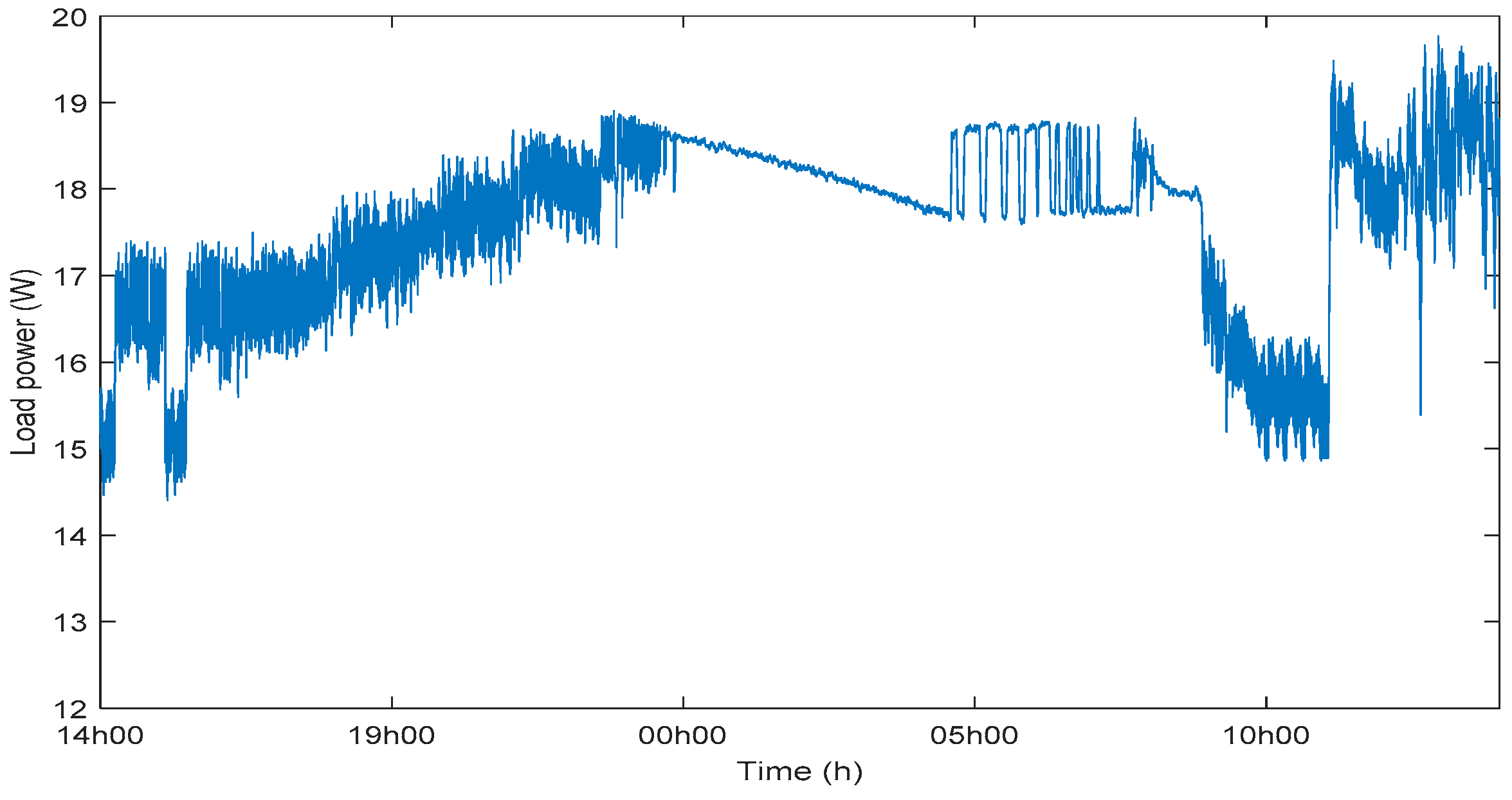