Considering that a number of important developments have been demonstrated in recent years in all BIPV technologies, related functional materials, and solar energy harvesting approaches, it is logical to identify the two main technology-related device categories to be discussed separately: the area-based PV energy converters, and the concentrator-type PV energy-harvesting systems. Forward-looking technologies and advanced novel materials have been investigated actively during the recent decade, resulting in noteworthy prototype demonstrations and product-level systems development, across the entire spectrum of BIPV application types. The following subsections address the principal results demonstrated in the area of semi-transparent PV energy harvesters from all main technological categories.

Semitransparent non-concentrating BIPV technologies are defined not only by their degree of visible-range transparency but also by their capability of enabling immediate photovoltaic energy conversion process, localised at any arbitrary region of light-ray incidence onto their active device areas. On the other hand, in concentrator-type semitransparent PV, the PV conversion is engineered to typically take place at the active (non-transparent) solar-cell areas placed at (or near) the edges of light-capturing semitransparent or clear aperture areas. These aperture areas serve to re-direct the incident light rays towards PV cells, and may contain materials providing partial light-trapping functionality, and/or light-harvesting structures that assist waveguiding-type propagation. Therefore, the major defining difference between these two main device categories is in the light propagation path-length within the devices, between the points of ray incidence and the location(s) where the PV conversion takes place. Both technological approaches possess their unique advantages and disadvantages, which are related to how the fundamental problem of balancing the overall energy-conversion efficiency and the degree of device transparency is addressed. The common metrics-related parameters used to evaluate the performance of semitransparent non-concentrating PV (or their suitability for any particular application area) include the visible light transmission (VLT), and power conversion efficiency (PCE) at standard test conditions (STC). The STC in PV metrology refer to using the standardised solar spectrum for device irradiation (AM1.5G spectral distribution, with 1000 W/m2 in radiation flux density), and making PV current-voltage characteristic measurements whilst keeping the solar cell surface temperatures at 25 °C. If detailed PCE characterisation metrology results are not available, other published product specifications or performance-related data can often be used to derive or estimate the maximum output power rating per unit active area. Table 1 summarises the main performance parameters achieved using non-concentrating semitransparent PV technologies in recent years.
A number of industrialised, product-level semitransparent PV module manufacturing technologies have been established, based on patterning the non-transparent active PV material area to ensure transparency. Systems using either amorphous silicon or cadmium telluride are becoming increasingly common, even though their (spectrally averaged) visible-range light transmission does not exceed 40 to 50%. Up to date, none of the commercially available patterned-layer energy-generating modules employing inorganic PV materials feature colour-neutral clear appearance or uniform transmission characteristics across their aperture areas.
A notable current trend in semitransparent PV modules development is the continued (and growing) attention of multiple research groups worldwide dedicated to optimizing the perovskite-based material systems. This is due to the rapid progress demonstrated in the performance (PCE) of perovskite-based photovoltaics recently, and over a relatively short time scale, reaching 27.3% conversion efficiency record in (non-transparent) tandem-type perovskite-silicon solar cells in 2018 [72]. The recently-achieved record efficiency in perovskite-based solar cells is at 20.9% [73]. The PCE of other semi-transparent perovskite-based research samples is currently in excess of 20%, demonstrated in stability-enhanced systems, in which the titanium dioxide-based electron transport layer was replaced by tin oxide [71]. The operational lifetime of these perovskite-based cells reported at the end of 2018 is still on the scale of several months, rather than years, which places their commercialisation prospects within the scope of near-future years, rather than today. Due to the potentially vast future application areas of perovskite-based semitransparent BIPV, significant research efforts are continuing in the materials science areas related to optimizing the chemistry and module structure of perovskite-based devices, to ensure improved environmental stability and performance. Methylammonium lead iodide (MAPbI3) based perovskite systems were recently shown [74] to possess intrinsic environmental stability limitations due to chemical chain reactions involving iodine vapour. The authors of [74] also hold a view that it is imperative to develop other types of perovskite material systems to achieve long-term stable solar cells, and work in this area is also ongoing in multiple research groups. Notably, efforts aimed at reducing the perovskite toxicity caused by the presence of lead and also removing the hysteresis in current-voltage characteristics have been reported [75,76].
Another rapidly developing category of semitransparent BIPV technologies possessing strong potential for future applications uses polymer-based organic materials, which can provide remarkable visible transparency simultaneously with high power conversion efficiency [60,61,66]. In this area, efforts to up-scale the solar cell sample size and ensure the long-term environmentally stable operation and commercially-applicable system packaging are currently ongoing, with product-level devices widely expected to be demonstrated in the near future.

3.3. Examples of Existing and Emergent High-Transparency PV Window Technologies and Their Applications

The practical integration of advanced solar energy-harvesting technologies into various elements of urban landscapes, including building windows, is rapidly becoming a mainstream trend. Substantial advances have been reported in recent years both in laboratory trials, and also in commercial demonstrations of the various semi-transparent solar cell types and solar window devices. A wide range of established semi-transparent PV and BIPV technologies exists currently, providing architects and building designers with multiple choices regarding the balance between the system aesthetics, degree of transparency (or colouration type), and power generating capacity. Multiple next-generation transparent solar-cell technologies, including dye-sensitised solar cells, patterned solar panels, organic polymer-based, and perovskite-based systems remain in active stages of development and continue to demonstrate new milestones in efficiency. Highly transparent, and colour-unbiased concentrator-type solar window systems are only beginning to make their entry into industry-wide acceptance. They now provide a previously unavailable combination of up to 70% in total visible light transmission and power conversion efficiency near 2.5%, based on systems demonstrated in 2017.
Despite the fundamental trade-offs between the required control over the visual appearance, degree of transparency, and the power generating capacity intrinsic to the design of advanced BIPV, their strong potential for transforming urban landscapes and providing substantial distributed generation capacity is certain. Developments in the materials science of advanced luminophores, coupled with novel designs of LSC-type semitransparent concentrator structures add continually to the possibilities of obtaining increased power conversion efficiencies. At the same time, a substantial energy-saving potential exists, provided by solar windows, which can also control the solar heat gain in buildings and the associated thermal insulation properties. The new trends in the local utilisation of the energy generated in the distributed way by the building components include using advanced windows with active transparency control, which can contribute substantially to both personnel comfort and climate control-related energy savings. It is currently expected that multiple commercial building-based trials of the latest transparent BIPV technologies will soon be conducted, uncovering their true practical applications potential.

All authors (M.V., M.N.A. and K.A.) have contributed to the conceptualisation of this review article and data collection; M.V. analysed the data and prepared the manuscript; all authors discussed the data, graphics, and the presentation; M.N.A. contributed substantially to the data curation and the original draft preparation; M.V. and K.A. further reviewed and edited the manuscript.

This research was funded by the Australian Research Council (grants LP130100130 and LP160101589) and Edith Cowan University. 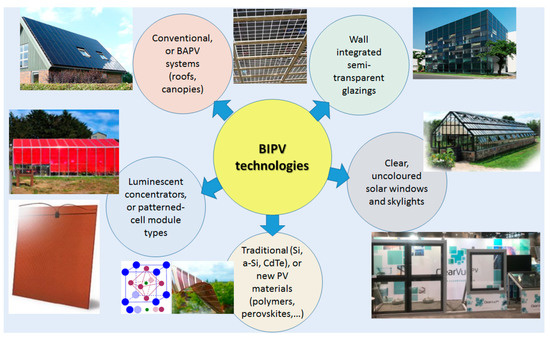 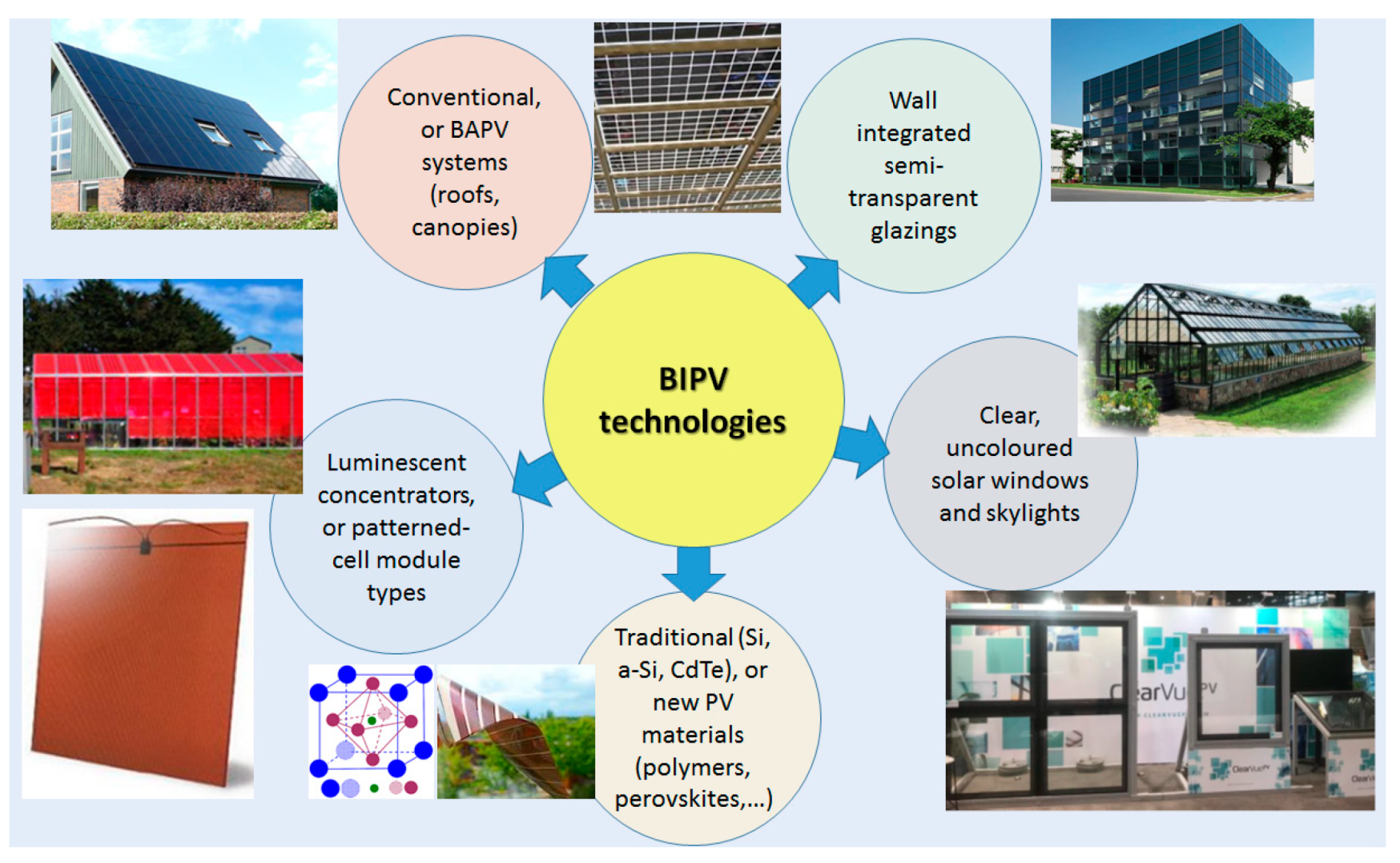 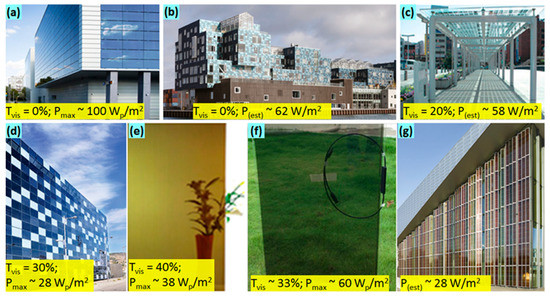