2.1. Description of the Hybrid Power System

The vehicle is equipped with a brushless direct current motor (BLDC) connected to a fixed-ratio transmission. BLDC is powered by battery and SC. The bidirectional DC/DC converter is used to interface the SC with the BLDC. Energy management controller plays the role of power split in the hybrid power system. The architecture of the hybrid power system is as shown in Figure 1. The main parameters of the EV used in this study are listed in Table 1.

Lithium-ion batteries are preferred in EV applications owing to their high voltage, good safety property, and long cycling life [23]. The main parameters of the Lithium-ion battery used in this study are given in Table 2.
Rint model is commonly used in describing the characteristics of the lithium battery, which is applied because of its simplicity and little inaccuracy. The battery behavior is represented by the Rint model depicted in Figure 2a.
The parameter data of variables is obtained through battery characteristics experiments, and the calculation results of the battery module internal resistance are shown in Table 3. According to the calculation results of the internal resistance of the battery module in Table 3, the relationship between battery SOC and internal resistance can be obtained by polynomial fitting under MATLAB environment (The MathWorks, Inc, Natick, MA, USA), and 6 times polynomial is obtained, such as Equation (1). where represents the SOC value of the battery, (mΩ) is the internal resistance of the battery. The fitting curve is shown in Figure 3, and a conclusion can be drawn through analyzing the data that the resistance appears smaller when the SOC was between 0.3 and 0.9. Hence, 0.3 to 0.9 is a high-efficiency working region for battery which will be used as boundaries of constraints.
The following two formulas demonstrate the mathematical character of battery based on the equivalent circuit model above. where E is the electromotive force; Ub is the battery terminal voltage; Ib represents the battery current load; R0 represents internal resistance; is the power loss.

The basic parameters of the SC modules used in this paper are listed in Table 4. The transmission line model shown in Figure 2b was adopted to represent the characteristics of the SC with its simplicity and sufficient accuracy. The series/parallel numbers SSC/PSC of the SC module within the SC pack is 40/9 in this study. SC working states are divided into 2 states in this paper beforehand, as shown in Figure 4. When the terminal voltage of SC is between UH and Vsc_max, SC single drive is the priority selection; when the terminal voltage of SC is between UH and Vsc_min, the driving modes are decided by the system efficiency.
The series resistance (Res) is relatively steady, and the parallel resistance (Rep) demonstrates the current leakage, which is small enough to be neglected. Hence, the approximate power wastage of SC is mainly caused by Res. The mathematical model of SC is expressed by the equations below. where USC represents the terminal voltage of SC; ISC is the outputting current; UC is the actual voltage of the capacitor in the SC; Ip is the leakage current.

The basic parameters of the motor used are listed in Table 5. The motor output power was evaluated through testing the rotor speed and torque, which could be used to distinguish the efficiency region and divide the power split mode, meanwhile the electric motor efficiency under different torque and rotor speed could be obtained. An efficiency map of the motor is presented in Figure 5. The top blue line represents the characteristics curve of the motor: the first half is constant torque phase, and the latter part is constant power stage.

The rule-based strategy is proposed on the basis of power source state and efficiency, and the strategy is empirical, but it cannot achieve the best efficiency optimization effect.
The DP algorithm will be utilized to solve the optimal problem in this section, which is a famous principal of optimization which transfers multistage decision problem to single stage, and solves each problem with the relations between different stages. The recursion equation below plays an essential role in the DP sequential algorithm. where xk is the state of the kth stage, the decision variable uk is the decision of the state at xk+1, the state transition equation is xk+1 = Tk(xk,uk), the set of allowed decision of k phase is denoted as Dk(xk), vk(xk+1,uk) is as an indicator function.
The DP algorithm aims at minimizing the energy loss of the hybrid power system at every moment under cyclic conditions, so as to achieve the optimization of vehicle efficiency and extend the driving distance. In this paper, the optimal control strategy of energy allocation based on DP algorithm takes the output power of the SC (PSC(t)) as the decision variable of global optimization, and time series as the stage sequence with the interval of 1 s. The SOC of the power battery (SOCb) and the terminal voltage of the SC (VSC) are the state variables of global optimization. The expression is as follows:
The DP optimization process of the energy allocation of the hybrid power system can be expressed as: (1) dividing the search for the minimum energy consumption path of the hybrid power system into several time series at a time interval of 1 s; (2) searching for the optimal decision variable u(t) during the transition from the initial state x(0) to the final state x(t) according to the vehicle power demand at each time; (3) making the hybrid power system achieve smaller energy loss. Therefore, the objective function of DP optimization for energy allocation of composite power system is as follows:
In the above formula, fw(x(t),u(t),t) is the energy loss of the hybrid power system at t time.
According to the above analysis, the cycle condition is divided into N stages in this paper, and the step size between each stage is ∆t (1 s in this paper). Therefore, the discrete global cost function of the hybrid power system is as follows:
The transfer function of the hybrid power system is as follows in this paper: where ηb(k) is the charging and discharging efficiency of battery, I(k) is the current of battery, Cini is the initial capacity of battery, CSC is the rated capacity of SC.
At the same time, the constraints that should be met are as follows: where Pr_max is the vehicle maximum demand power, Ib_max is the battery maximum output current, ISC_max is the maximum current of SC.
According to the basic principles and basic equations of the above DP method, the objective function recursive equation of the hybrid power system at any k time can be expressed as:
The DP algorithm adopted in this paper takes the SC terminal voltage of as the initial state variable and discretizes it into 140 states from 0.5VSC,max to VSC,max, as shown in Figure 12. The DP algorithm first carries on the reverse calculation. After the SOC of the battery and the terminal voltage of the SC are given, the optimal decision results of each stage are obtained by the reverse calculation according to the terminal conditions k = kmax. Taking the decision variables of k time u(k), ui(k) as an example, the state of k+1 time x(k+1), xi(k+1) can be obtained according to the system state variables of k-time. Because x(k+1), xi(k+1) is not necessarily the state value at k + 1 time, the energy loss of composite power system corresponding to state x(k+1), xi(k+1) is obtained by interpolation method. The energy loss value of the composite power system with state variables u(k), ui(k) at k time is f(k), fi(k). The output power of the SC corresponding to the smaller one is taken as the optimal decision variable in this stage. All other stages are the same until all stages are reversed. At the end of the reverse recursion, the forward calculation is needed, and the optimal decision variables at each time are obtained by interpolation calculation based on the results of the reverse operation as known variables.

3.1. The Results of Rule-based Strategy

3.2. The Results of DP Strategy

The authors declare no conflict of interest to the paper. The funders had no role in the design of the study; in the collection, analysis, or interpretation of data; in the writing of the manuscript, and in the decision to publish the results. 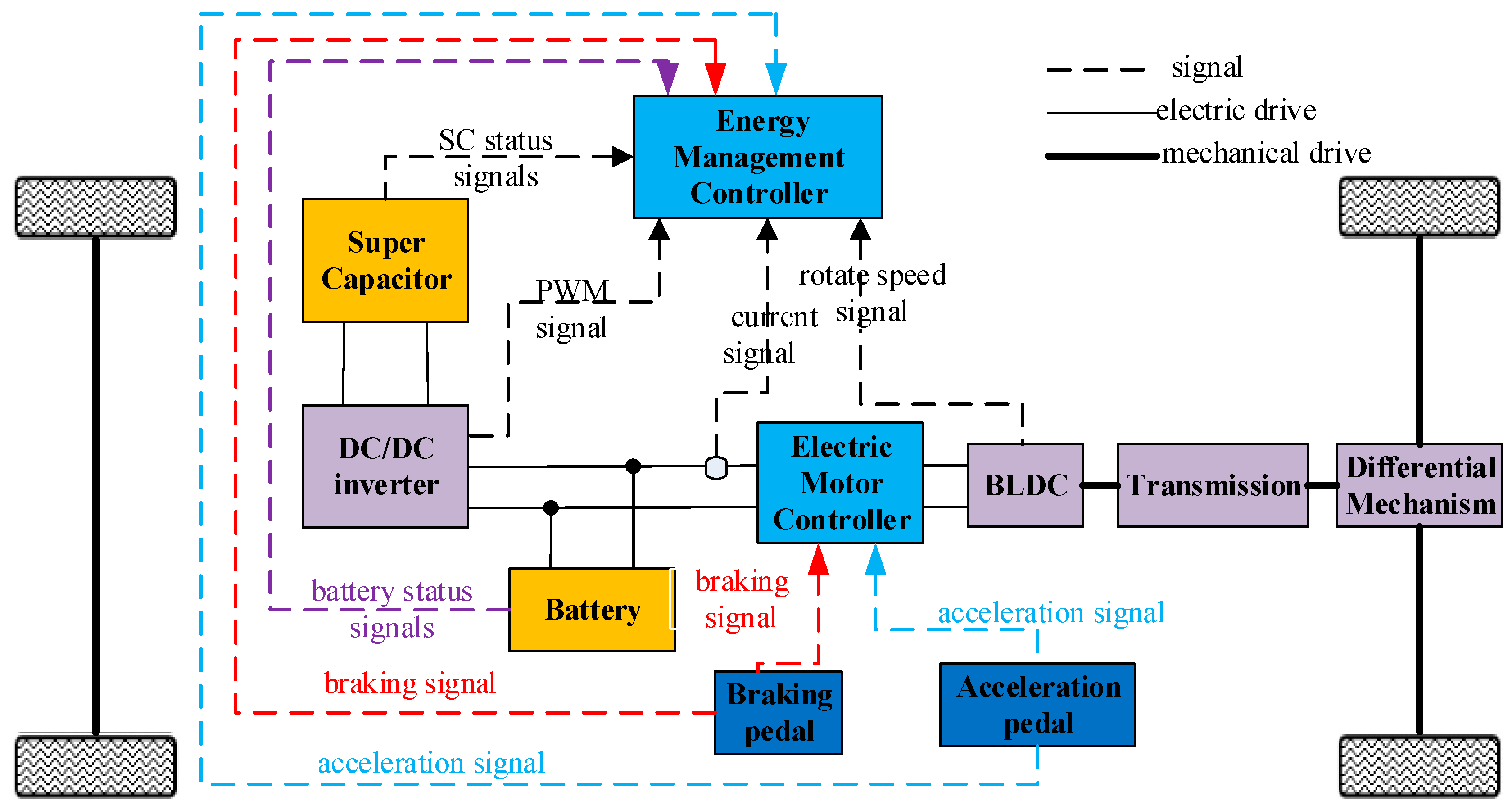 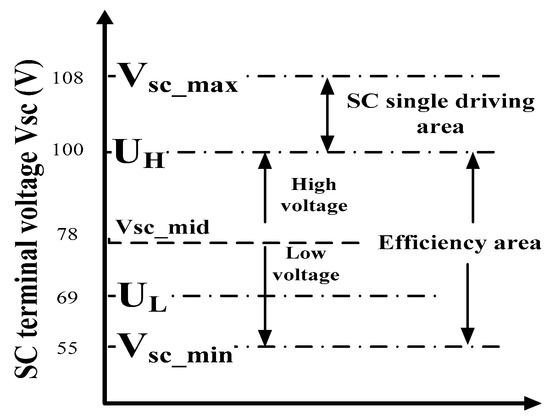 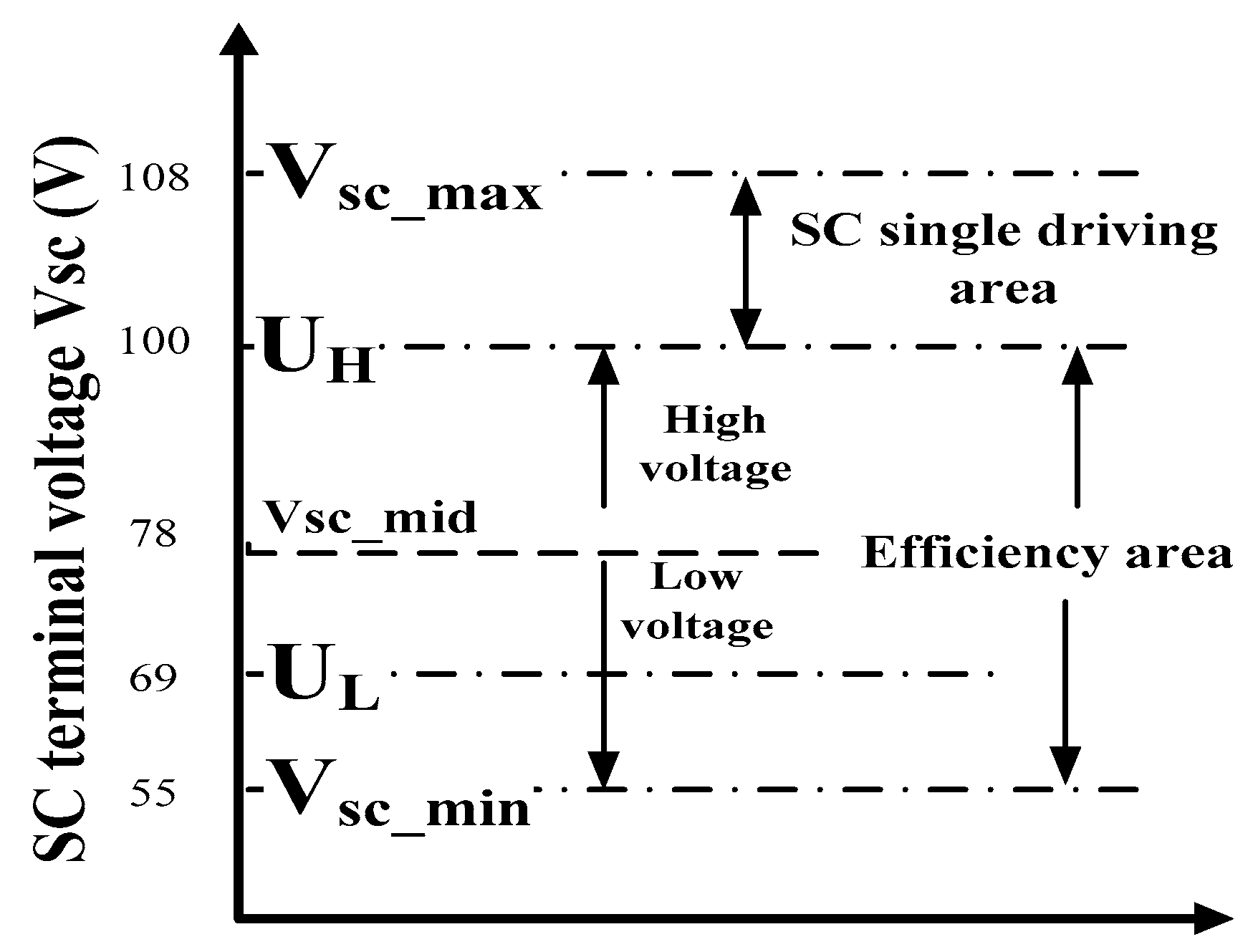 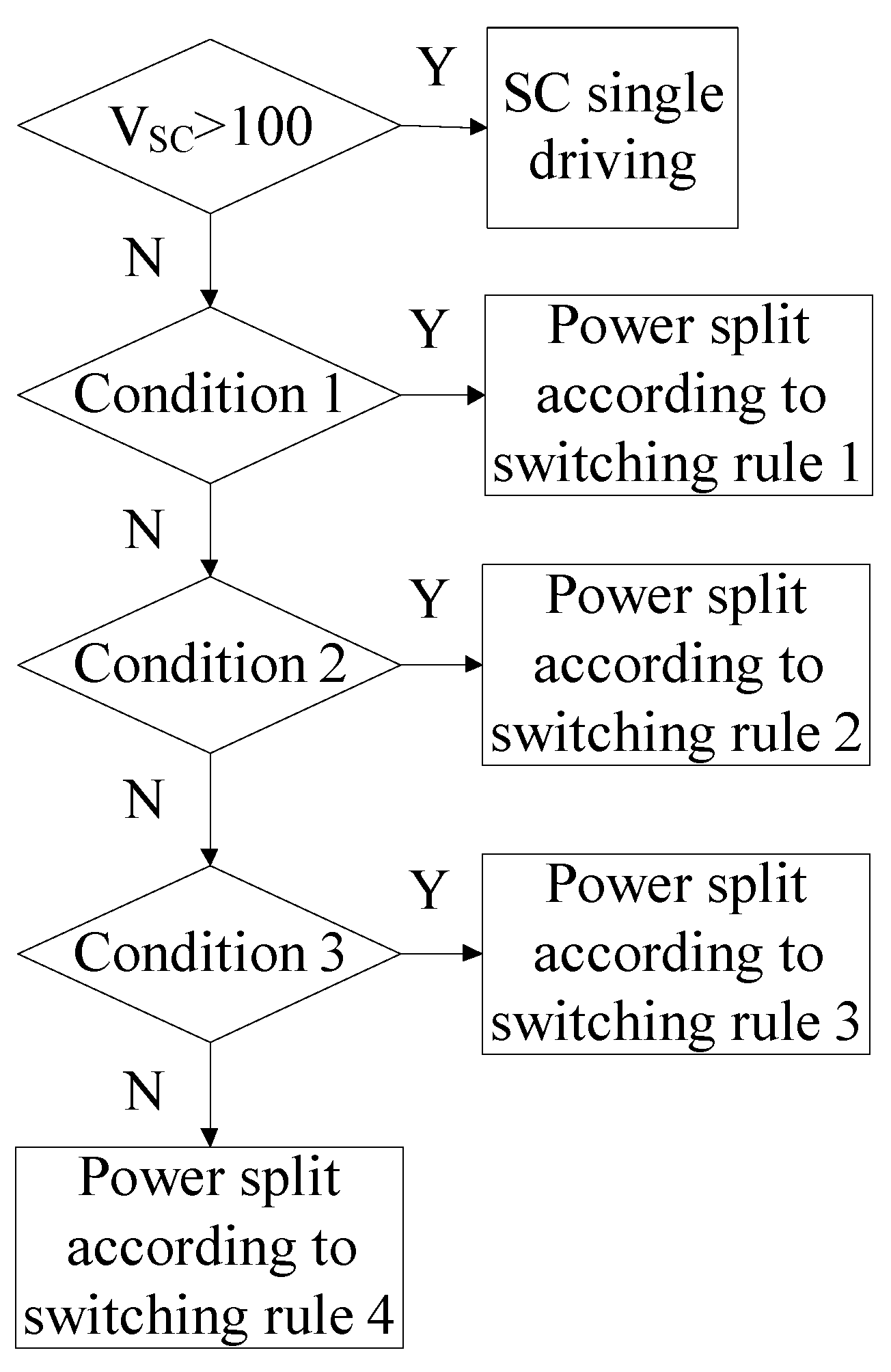 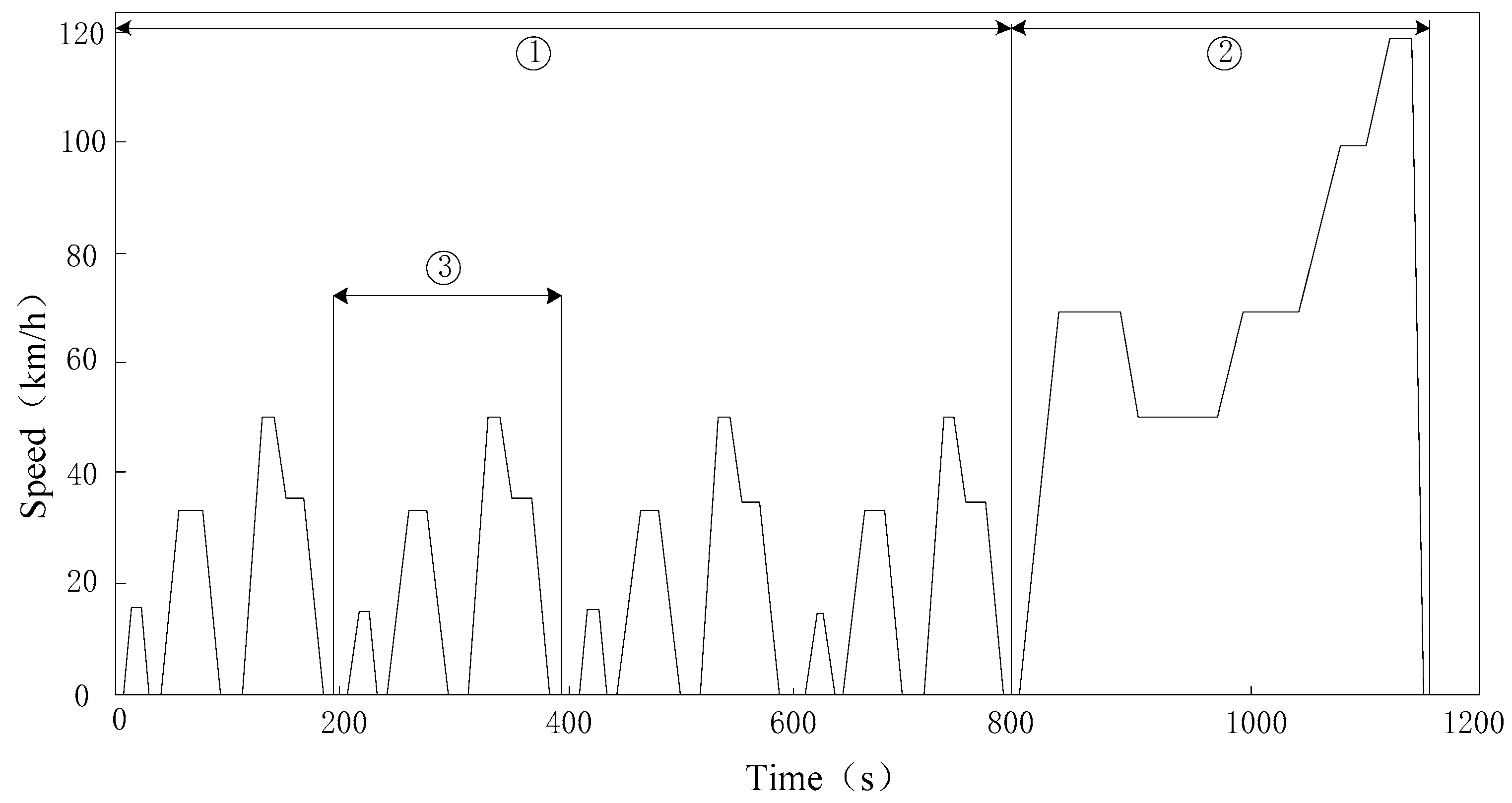 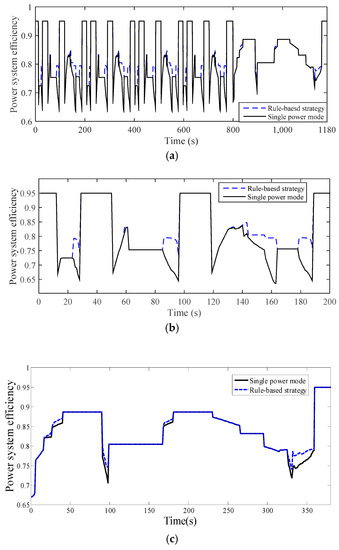 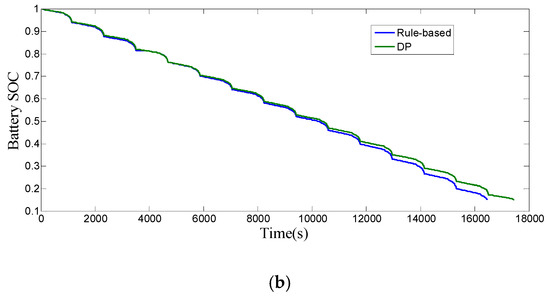 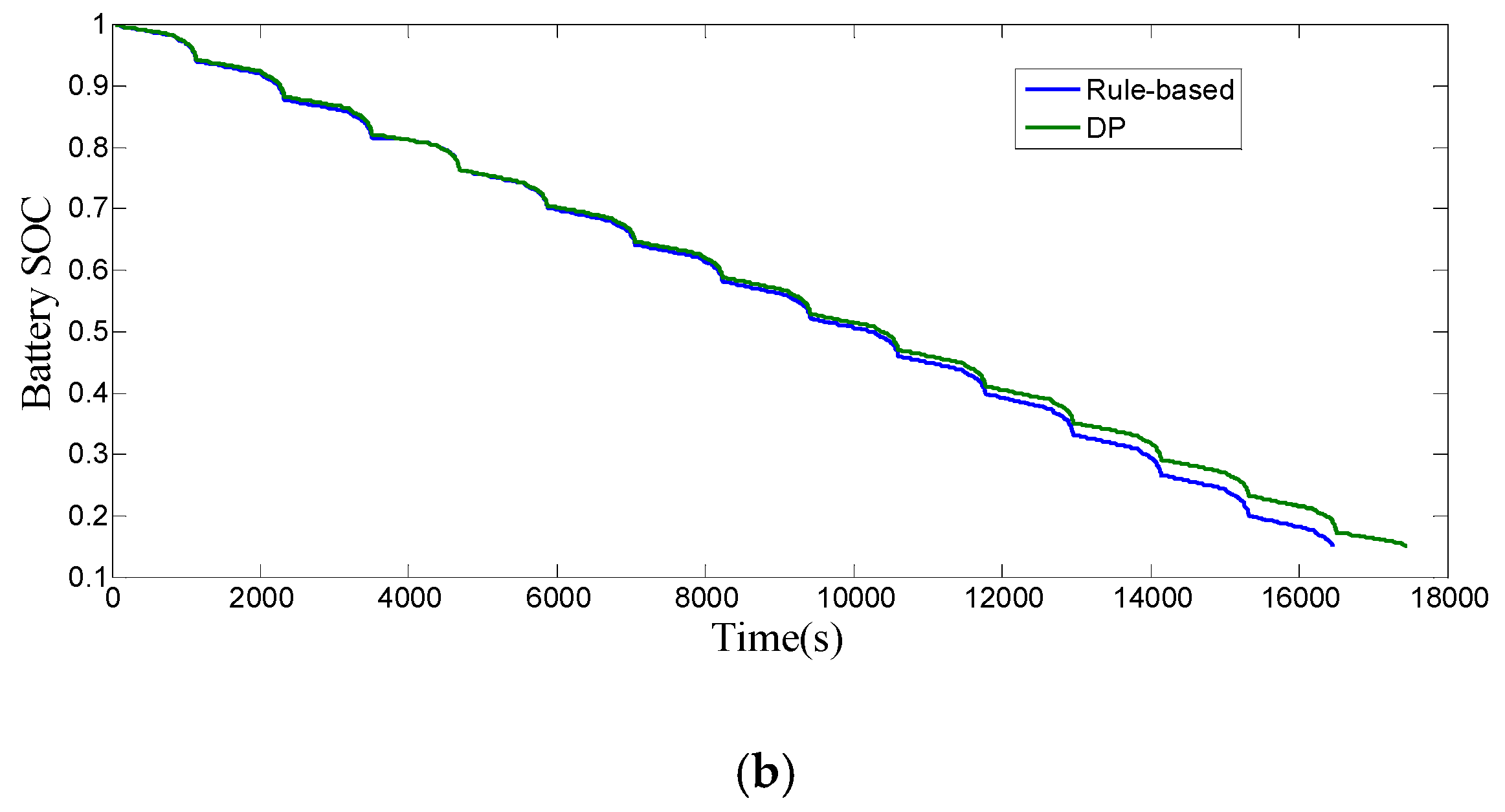