Runner Lifting-Up during Load Rejection Transients of a Kaplan Turbine: Flow Mechanism and Solution
Next Article in Special Issue

The dynamic disasters caused by the failure of hard roof in the process of mining coal seriously affect the safe production in coal mines. Based on the W1123 mining coal working face of Kuangou coal mine, the physical similar material simulation experiment and acoustic emission (AE) monitoring method are used to study the failure law and AE characteristics of overburden in the process of coal mining. The stress evolution law is revealed through numerical simulation, the dangerous areas and rock burst hazard under the repeated mining with hard roof are studied combined with microseismic monitoring on site. The results show that the energy of W1123 working face released by the overburden damage under B4-1 solid coal is higher than that of the gob, and the peak value of the AE energy appears near the W1145 open-off cut. Through the statistics of the AE data, the large energy rate of AE event is defined, and the AE events with large energy rate appear in the scale of 82.4–231.2 cm within the model. This area is shown as a stress superposition area according to the numerical simulation. On the basis of comparing with the characteristics of energy distribution in the field, it is considered that the main control factors of rock burst in this area are hard roof of the working face and the stress concentration caused by the repeated mining. It provides a scientific guidance for the prevention and control measures of rock burst in this type of mining condition.
Keywords: AE monitoring; rock burst; hard roof; repeat mining AE monitoring; rock burst; hard roof; repeat mining

2.2.2. Construction of Similar Model and Layout of AE Monitoring

3.1. Simulation of Overburden Breakage Based on AE Monitoring

3.1.2. Rule of Overburden Breakage and Characteristics of AE in W1123 Working Face

3.2.1. Election of Numerical Simulation Software and Establishment of Model

RFPA2D (a numerical simulation method based on nonlinearity, heterogeneity, and anisotropy in rock fracturing, which was developed by Dalian Mechanics Software Co. Ltd. in China.) can calculate and dynamically demonstrate the whole process of material from loading to fracture. The whole system has strong openness and expansibility, which is especially suitable for studying the influence of stress redistribution caused by local failure process on further deformation and failure process, as well as the AE characteristics of rock fracture simulation. Because this paper needs to analyze the characteristics of the overall structure and stress change, we choose two dimensional finite difference program RFPA2D is used for numerical calculation and analysis.
Figure 9 is the numerical calculation model of RPFA2D with the size of 500 cm × 189 cm. The basic elements of the model are 0.5 cm × 0.2 cm and the total number of numerical models is 9.45 × 105. In the process of building the model, the actual situation of the working face is fully taken into account. There are beddings between the overburden rocks, the lateral side of the model restricts horizontal movement, and the bottom restricts vertical movement. A stress monitoring line is arranged at the bottom of the model to monitor the stress change characteristics. The mine sequence of coal seam is carried out with reference to similar simulation experiment.

Based on the characteristics of on-site microseismic energy distribution, the above analysis results are verified. The specific way is to expand the laboratory model according to the geometric similarity ratio, and to compare the laboratory energy distribution characteristics with the on-site microseismic energy distribution characteristics in the same length of the open-off cut W1145. Figure 14 is obtained. The abscissa of Figure 14 is the actual mining length of working face W1123, the blue column is the on-site energy peak, and the red broken line is the laboratory energy peak. It can be seen from Figure 14 that the on-site energy distribution is highly consistent with the laboratory energy distribution. With the mining position of the working face close to the W1145 open-off cut, the peak energy shows a growing trend. This is consistent with the conclusion that the rock burst hazard increases gradually with the approach of W1123 working face to W1145 open-off cut. After the open-off cut of W1145, the on-site energy and laboratory energy showed a significant downward trend. This is consistent with the conclusion that when the working face is mined under B4-1 solid coal, the rock burst hazard higher. During the gradual advancement of W1123 working face, there were 11 events with the peak energy greater than 1 × 106 J in total, among which there were 8 events with the peak energy greater than 2 × 106 J, which were respectively located in the three areas of 480–540 m, 550–600 m and 650–700 m, as shown in the black block diagram in the figure. However, in the similar simulation experiment, there were large energy events in the peak area, which showed that it was true that near the gob W1145. It will increase the rock burst hazard events.
It is suggested to strengthen the management in the area of rock burst hazard, on the one hand, to reduce the hanging area of the roof in the working face. on the other hand, to reduce the stress concentration in front of the coal wall. The concrete method is to carry out deep hole presplitting blasting and top cutting blasting in the roof, it can reduce the accumulation of high stress. During the mining period, the main methods are deep hole loose blasting, coal body pressure relief blasting and large-diameter empty hole blasting, which can improve the caving ability of top coal and reduce the transmission efficiency of energy released by overburden breaking to the working face space.

Based on the statistical analysis of the AE data of the similar simulation experiment W1123 working face, the average AE energy rate of this experiment is 2.04 mv·us/n. The event with the AE energy rate more than 4.08 mv·us/n is defined as the AE large energy rate event of this experiment. It is found that the AE large energy rate event in the mining process of W1123 working face mainly occurs under the B4-1 solid coal, located between 82.4 cm and 231.2 cm of the model, In the process of mining under the gob, the AE energy rate of the working face is mostly in the low-level state below the mean line. In the process of mining under the B4-1 gob, the AE signal shows the characteristics of “high frequency and low energy”.
Through monitoring the stress distribution of numerical simulation, it is found that the model 82.4–231.2 cm is the stress superposition area. As the working face moves from B4-1 solid coal to the gob, the advance bearing pressure of W1123 working face overlaps with the residual stress of W1145 working face, the peak stress increases continuously, and finally reaches the maximum value near the open-off cut of W1145, forming a single high stress pressure peak, and it is confirmed by the AE signal in this area.
Based on the comparison of energy distribution characteristics in this area with that on-site mining process, it is considered that the rock burst hazard of W1123 working face is the result of the joint action of hard roof and stress concentration in the repeated mining process. It is suggested that necessary prevention and control measures should be taken for the working face in this area to ensure the safe production of the mine.

This work is sponsored by the National Natural Science Foundation of China (No. 51874231, 51504184), which is part of the Shaanxi Natural Science Fundamental Research Program Enterprise United Fund (2019JLZ-04). “Special Support Program” of Shanxi Province in 2017 and Shaanxi Innovation Team Program (No. 2018TD-038) are gratefully acknowledged. The authors wish to acknowledge the financial supports of Outstanding Youth Science Fund of Xi’an University of Science and Technology (2019YQ2-16). 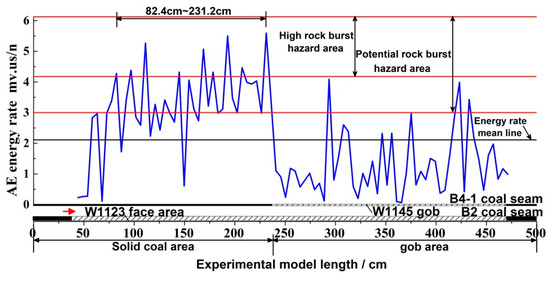 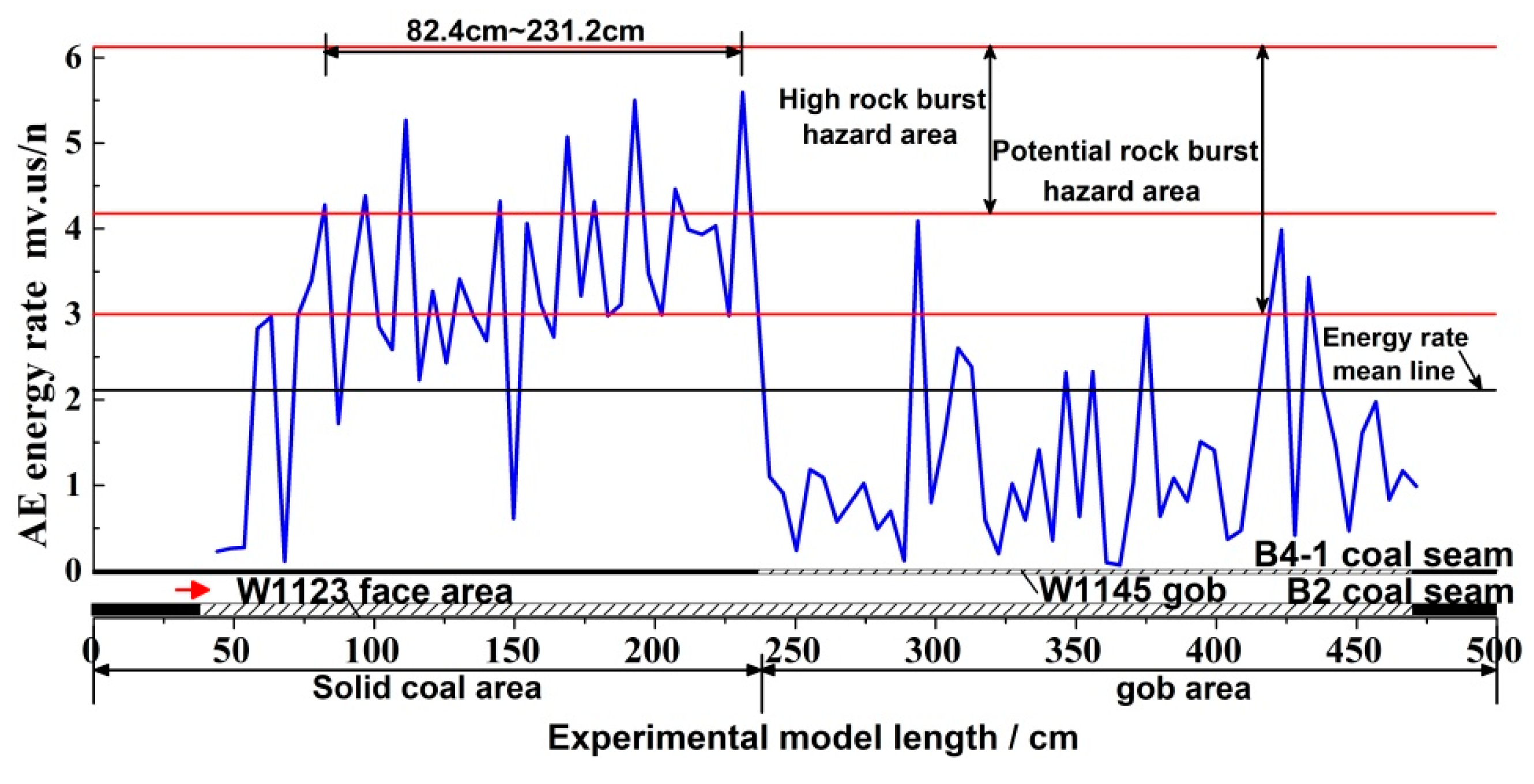 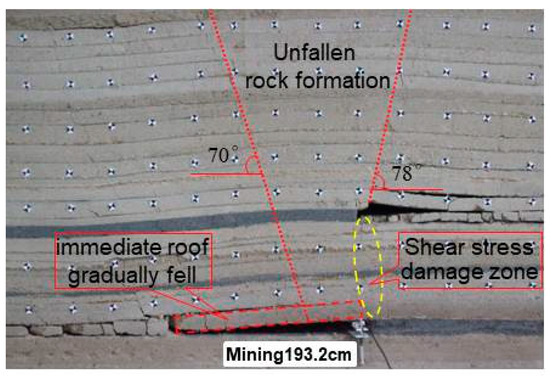 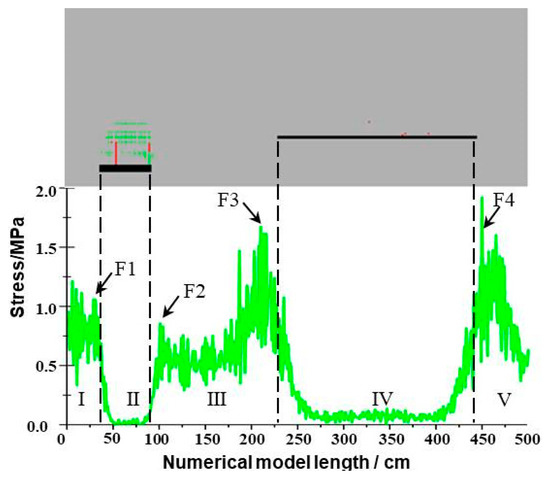 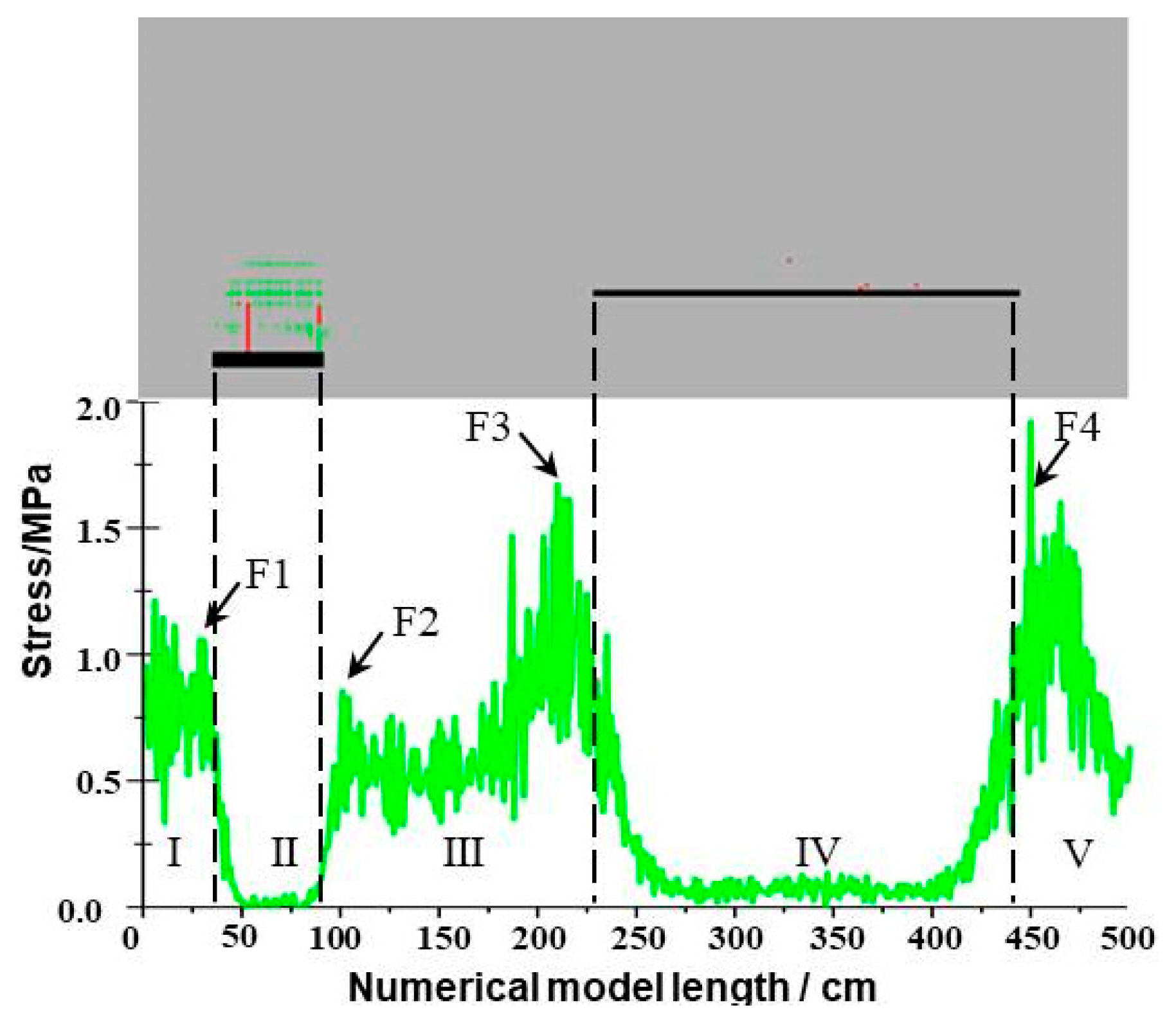 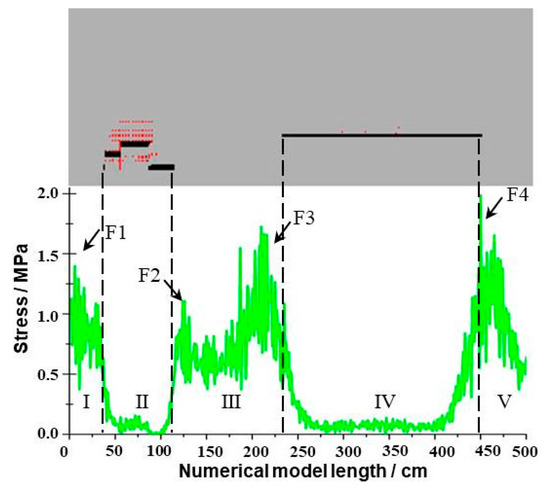 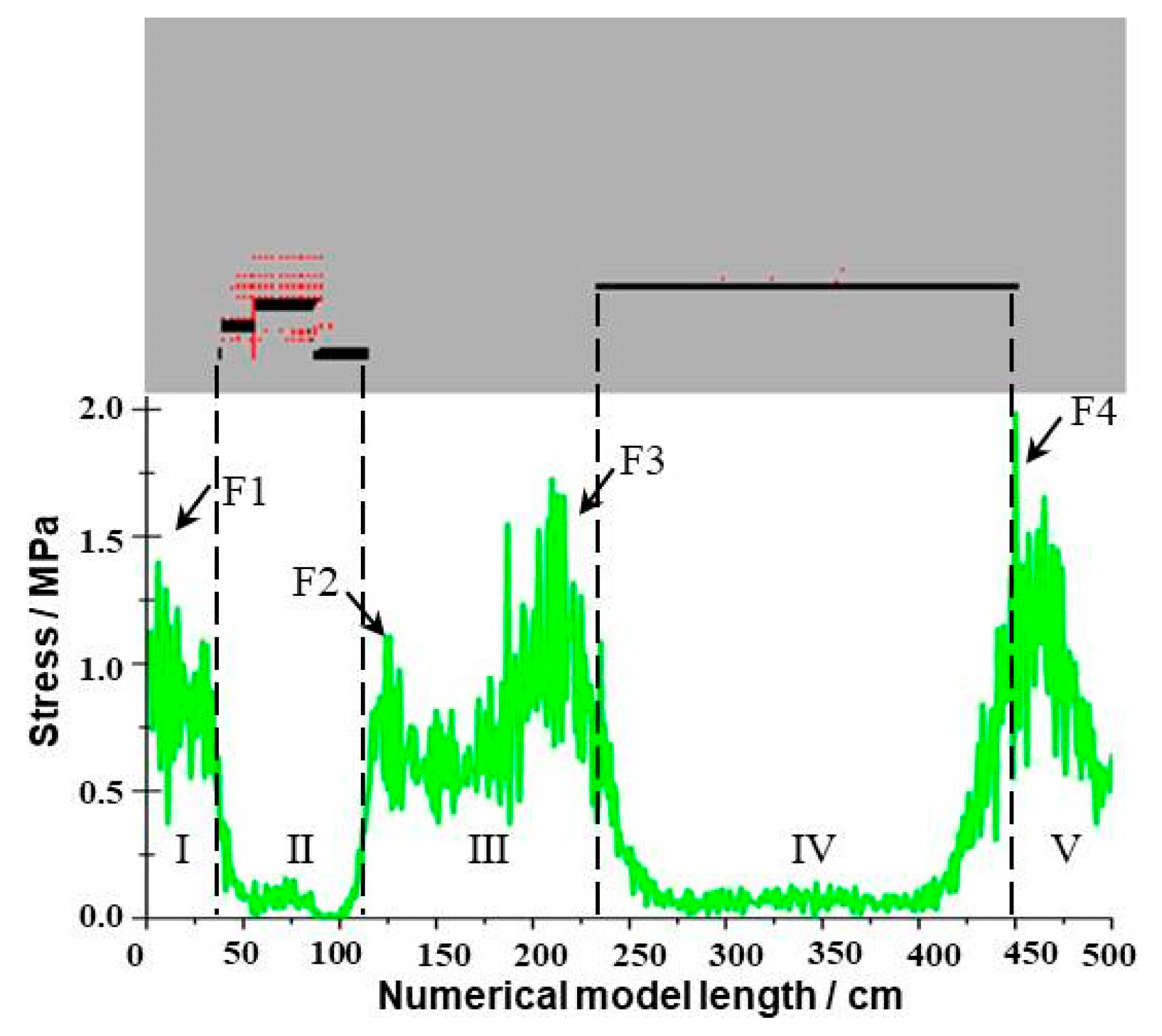 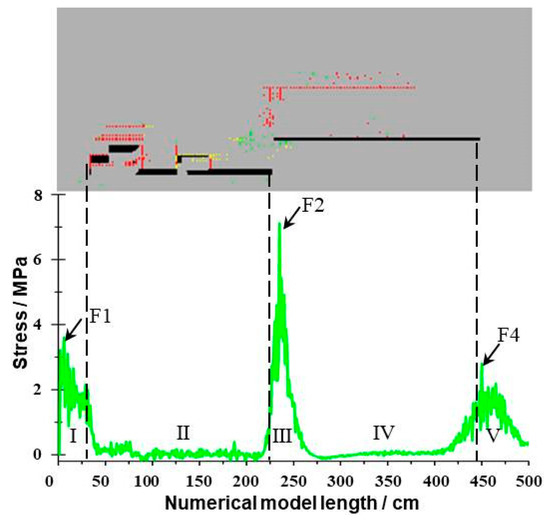 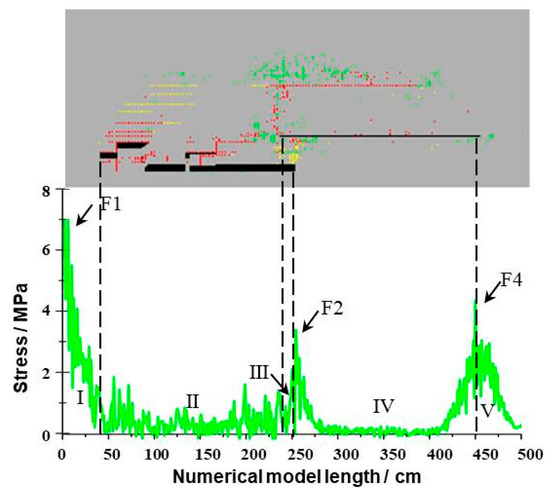 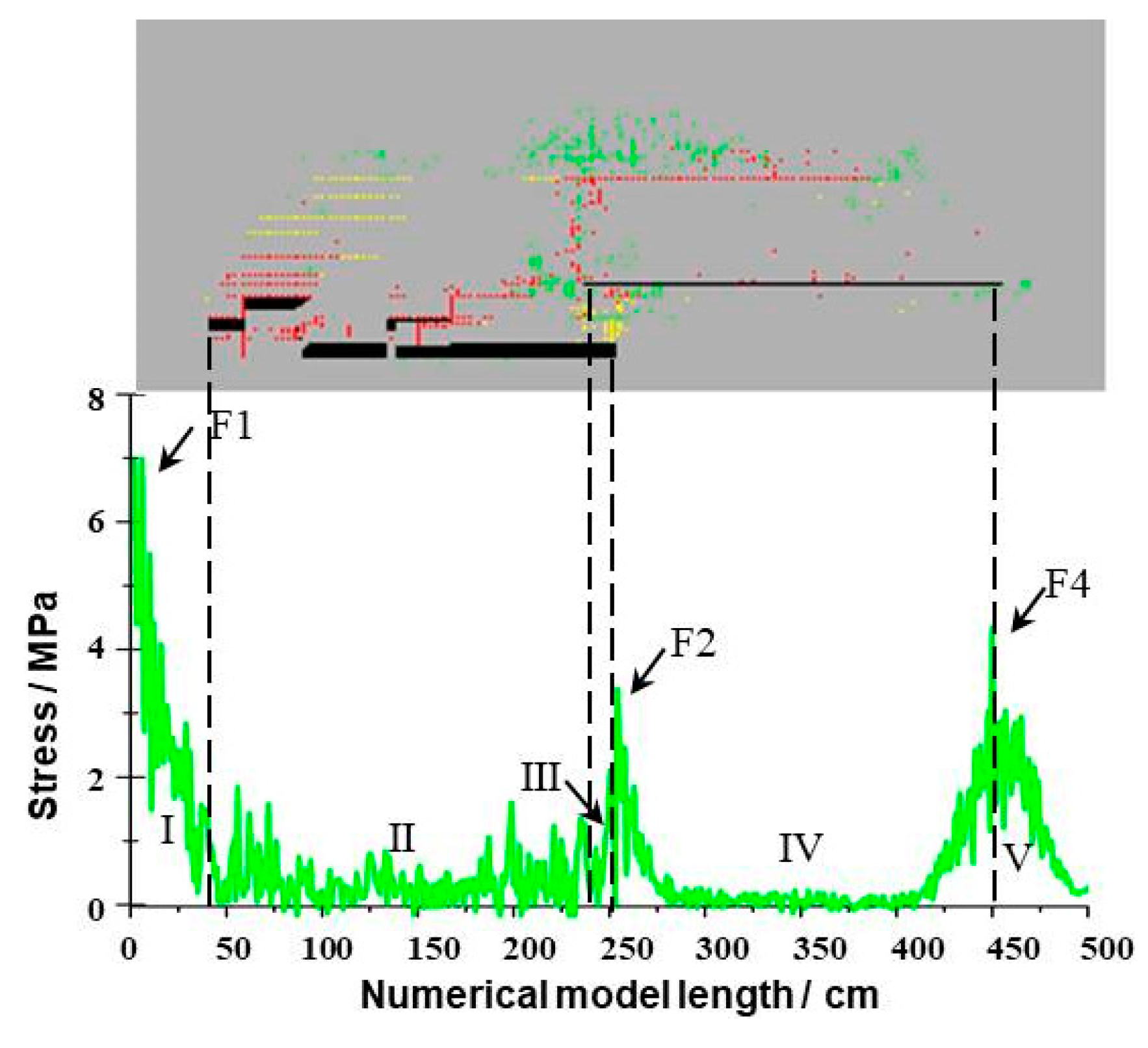 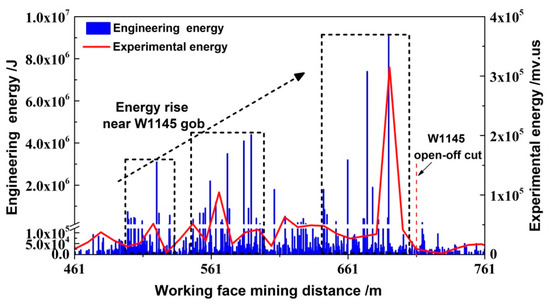 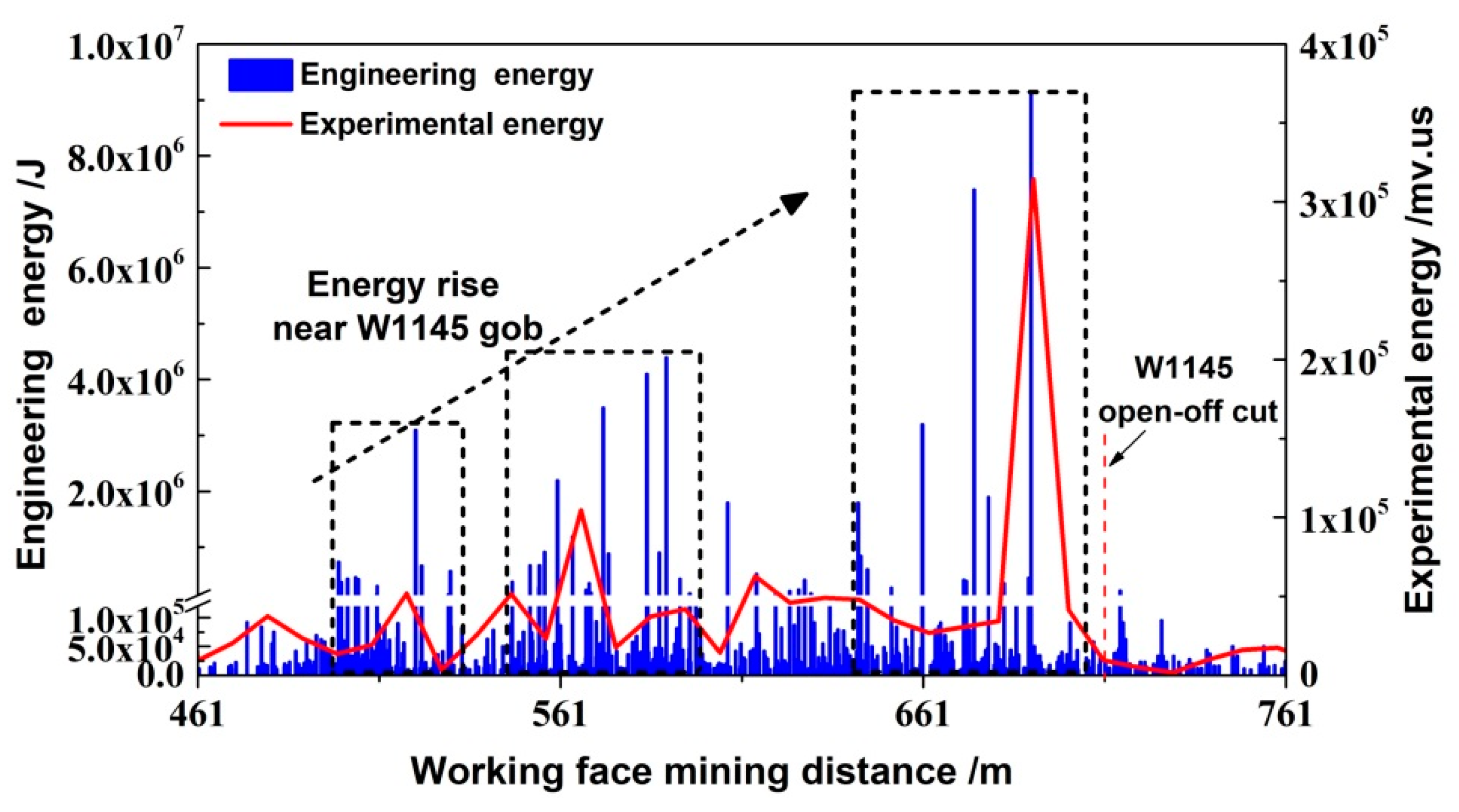